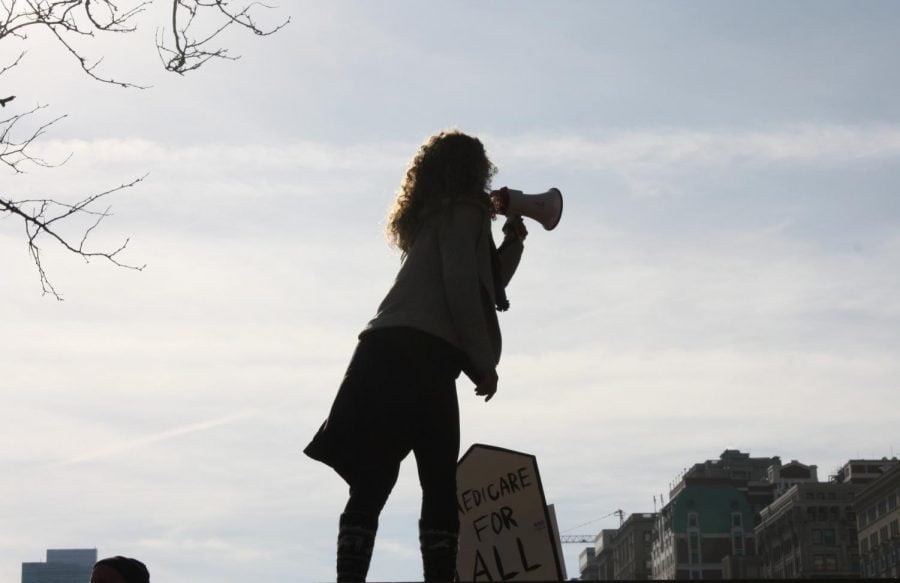 Pink hats and catchy, political posters paraded down Chicago’s Loop streets for the second annual Women’s March. An estimated 300,000 attendees were recorded, approximately 50,000 more than at the march’s inception.

The momentum carries on exactly a year after President Trump’s inauguration on Jan. 20. This year, organizers of the Women’s March have a strategic agenda: get more women into office.

While various marches took place across the country Saturday, the Women’s March took place in Las Vegas on Jan. 21. Although the Women’s March weekend is over, the feminist organization has hit the road on a national voter registration tour with the intention to register new voters in swing states and communities impacted most by the Trump administration.

The march’s inception in 2017 was a national, unified response meant to show women’s disapproval of the then newly elected president. His infamous line “grab her by the pussy” and “nasty women” comments awakened a resistance among women across America.

The Women’s March attempts to take an intersectional approach toward all social issues under attack by the Trump administration. Their mission is based on the idea that women’s rights are human rights.

Marchers like Ellen Cohen, who traveled from Palo Alto, California to participate in the march may have only bought one plane ticket, but she didn’t come alone.

The laminated face of a young girl named Hannah dangled from a homemade paperclip necklace.

Cohen said that Hannah is from Oklahoma City and can’t march herself because she is disabled. Cohen symbolically brought Hannah to Chicago so that she could have her voice heard.

“This march is for everyone, and we can’t forget the disabled,” she said.

This year’s theme, “Power to the Polls,” hopes to turn the marcher’s activism and energy into the voting booth to ensure more female and progressive candidates get elected into office.

Candidates such as Bushra Amiwala, a Muslim DePaul student, who is currently running for a seat on the Cook County Board, 13th district, against incumbent Larry Suffredin, who has held the position since 2002.

Amiwala was in attendance at the march, and just last week was on the Time magazine cover titled “The Avengers,”  which highlighted female politicians who have run for office in the past year.

Speaking from her experience of running since March of 2017, she thought there was hypocrisy behind the encouragement of getting women like her run for office due to the lack of support she has experienced in her running so far.

“Everyone is preaching and saying how we should pay attention to these women and younger generation,” Amiwala said. “(They are) saying we should give them all a chance and we should vote for them and don’t vote for these older, white, upper-class men, but these women who are saying that hold office themselves. Guess who they are lending their support to?”

While she thinks the march was better organized this year, noting even that there was less chanting and more listening, she couldn’t fully agree with speakers at the march like Cook County Board president and former 4th Ward alderman, Toni Preckwinkle.

“What I thought was almost hypocritical was, for example, Toni Preckwinkle went up and she mentioned the Time magazine cover and how we should all support young women running for office,” Amiwala said. “But, I’m a young woman running for office but I’m running against a 16-year incumbent. I know she would never offer her support to me because she’s friends with him. So to me that sounds almost hypocritical (…)It really bothers me that this is what they’re preaching, but this is how they’re acting.”

Ann Russo is a professor of women and gender studies and director of DePaul’s Women’s Center. She has supported the Women’s March since its inception but also recognizes the validity of the critics who claimed the 2017 march was segregated and mostly led by a white majority.

“You’re going to have those divisions because this is the world we live in,” Russo said. “Unless there’s building across organizations, across groups, across where your intentionally building a community that recognizes how those power lines are dividing you, you can’t expect a day of protest to all of a sudden be different than the way they are 364 days of the year.”

Like Amiwala, she is also critical of this year’s theme to motivate more progressive women for office. She questions what ‘progressive’ means.

“I think the idea of going to the polls, yeah that would be great, but I want to know what their politics are,” Russo said. “Like are they going to feed more into incarceration, are they going to feed a situation where people have less access to housing? There’s a lot of conflicts (…) Does progressive also mean anti-racist or does it mean pro-immigrants? I think those are the difficult questions.”

But for others, the Women’s March has had its intended effect. Chicago resident, Mary Carvlin, decided that it was time to take action. Beginning last year, she has launched a grassroots campaign to unseat long-time incumbent Robert Rita in Illinois’ 28th District.

“He has $900,000 for his campaign,” she said. Carvlin recognized that defeating Rita will be difficult. She said that Rita has been able to amass a sizable war-chest because he has ran unopposed the last four elections.

Carvlin said that women bring a fresh perspective that is necessary to facilitate innovative ideas. She also said that African Americans were not being properly represented in her district.