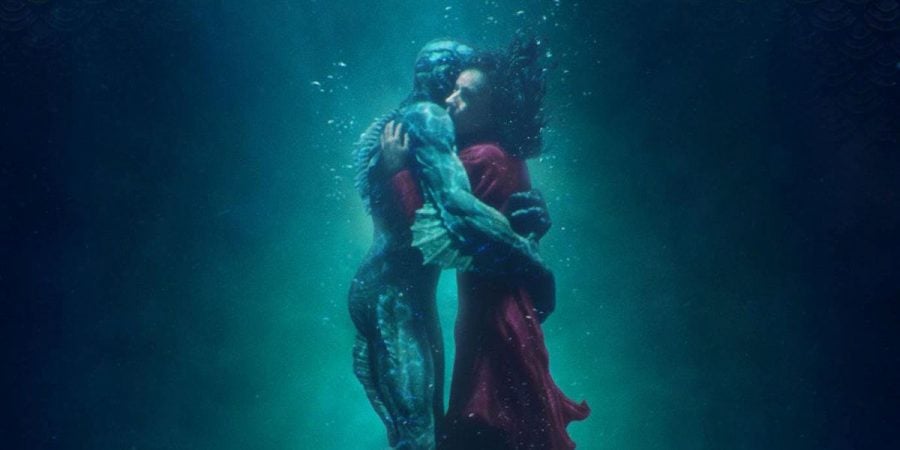 Doug Jones and Sally Hawkins in the Oscar nominated film “The Shape of Water.” (Courtesy of IMDB)

“The Shape of Water ” rebels against Oscars tradition

Sometimes, while diving through the sea of drawn-out dramas and complicated character studies that generally make up the Oscar nominations, you find a pearl that shines brighter than the rest.  Particularly for someone who is not a fan of those genres, Guillermo del Toro’s “The Shape of Water” is that pearl.  Del Toro crafts the story of a mute janitorial worker named Eliza, played by Sally Hawkins, who begins to fall in love with an amphibious creature (Doug Jones) being housed in the government facility she works in.  Unfortunately for her, head of security Richard Strickland (Michael Shannon) plans to kill the asset to prevent it from falling into Soviet hands; while never explicitly stated, context clues suggest that the film takes place in the late 1950s.

The plot seems intriguing at first glance.  However, towards the final act of the film, it quickly devolves into a series of romance clichés.  This can be severely off-putting for someone who is not a fan of the genre, especially when contrasted with the earlier minutes that more closely follow the guidelines of a darker monster film.  Fortunately, del Toro devotes himself to ensuring it is the best-told cliché romance of the year, crafting a beautiful setting, fleshing out his characters and adding another Oscar-worthy score from Alexandre Desplat.

As the opening credits roll, we are toured around a room submerged in green-tinted seawater, with rays of light supposedly streaming through the surface, giving us glimpses of what lies beneath an alarm clock that floats just inches off the nightstand it had been sitting on moments before. The camera slowly pans left, and we see a person suspended above their bed.  As the credits end, these items slowly fall back into their original positions as the water gradually escapes the scene.  Before we know it, it is as if it were never there and the movie begins.

On a technical level doing something like this must have been a unique challenge,  and it makes for spectacular viewing.  Del Toro brings this same level of beauty to all the underwater shots in the film and those outside of it as well, doing a great job of contrasting light and dark colors.  In one scene, we see the dust and decaying rats underneath Eliza’s apartment floor before being shown the gummy grandeur of the nearly empty movie theater below her.  Strickland travels from his gray government office to his classic ’50s home filled with bright yellows and oranges.

Within these crafted scenes we get to view characters that could have easily been romance character tropes, but in this film they go beyond that.  Hawkins doesn’t just play a woman who is emotionally incomplete but is literally incomplete in the sense that she can’t talk.  This could’ve resulted in a performance of overacting Oscar bait, but Hawkins brings so much sincerity to the role that it moves beyond that.  She communicates so much without needing to speak, and even when using sign language one can almost hear how she should have spoken them.

Richard Jenkins is great as Giles, Eliza’s friendly neighbor. He stands out because we are shown his motivations for acting the way he does. These scenes could be seen as detached from the main plot of the film, but they add so much depth to his character and is it far more effective than just telling the audience through a long monologue.

Similarly, Shannon has his depth explored in scenes with his family, in a car dealership and at the military facility interacting with the general who heads the operation.  We get to understand his motivations so that, while he may never be sympathetic, he becomes more than just some evil guy.  And Shannon brings just as much sincerity to this role as he did to General Zod in 2013’s “Man of Steel,” only this time the movie fits around the characters much better.

Octavia Spencer’s Zelda, while funny, is probably the most two-dimensional of the group.  She mostly serves as Eliza’s friend at work who spouts endlessly about how lazy her husband is.  Spencer does well with what she is given, but certainly has the least screen time to gain depth.

The creature itself is also performed beautifully, with Doug Jones bringing along his experience with other nonhuman roles like Abe Sapien in both “Hellboy” films, also directed by del Toro. The aquatic being was made primarily from makeup and prosthetics giving its actions a sincerity that would likely be absent if the character was entirely CGI.

The music ties everything together, standing out specifically in the more romantic moments, using an accordion to draw romantic images of a summer’s day in the French countryside.  It lends a purity that brings a little something extra to the scenes.

The clichés of “The Shape of Water” won’t be for everyone, but for those looking for a break from the traditional Oscar films, this could be a breath of fresh air.  Even for those predisposed against romance, this one is still worth at least one watch if only for the aesthetics alone.