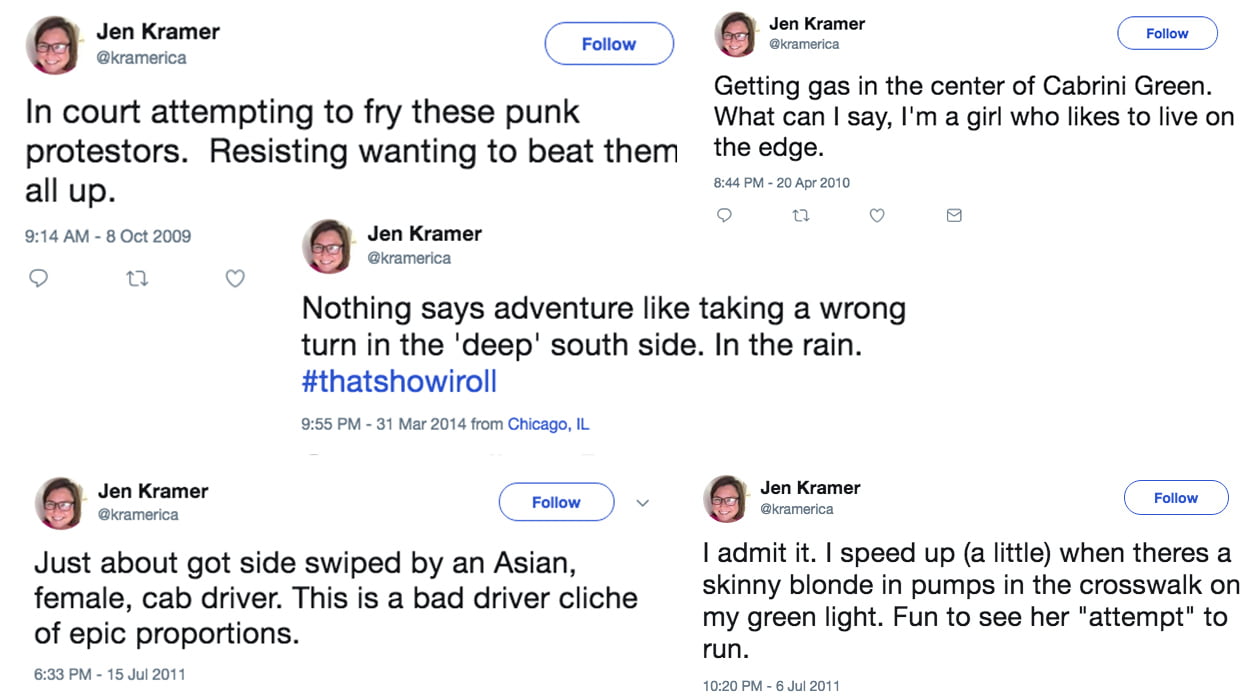 Jen Kramer’s past insensitive tweets have followed her into her new job at DePaul as the Director of University Events. Her tweets, spanning from 2009 to 2011, contain overtones of racism, transphobia and violent thoughts.

Her tweets, which also landed her in hot water in 2015 when she was running against 43rd Ward Alderman Michelle Smith, were brought to light by The Civil Rights Agenda, a local civil rights group.

“Gone are the days when a high-pitched voice and moustache determine someone’s sex. The worst part, I think it hit on me. Just my luck,” reads one of her tweets.

Jenni Holtz, co-leader of Students for Reproductive Justice and a campus activist, said that the fact DePaul hired someone who has displayed “blatant racism and transphobia” is just part of a larger trend of hypocritical actions from the university. They said since the Milo Yiannopoulos event two years ago, DePaul has failed to support students of color and the LGBTQ student body, particularly through the shuttering of the Center for Identity, Inclusion and Social Change. All in all, they say, it paints a picture of the university’s irreverence towards their stated commitment of a diverse community.

“Kramer’s employment by DePaul is yet another example of DePaul’s negligence,” Holtz said. 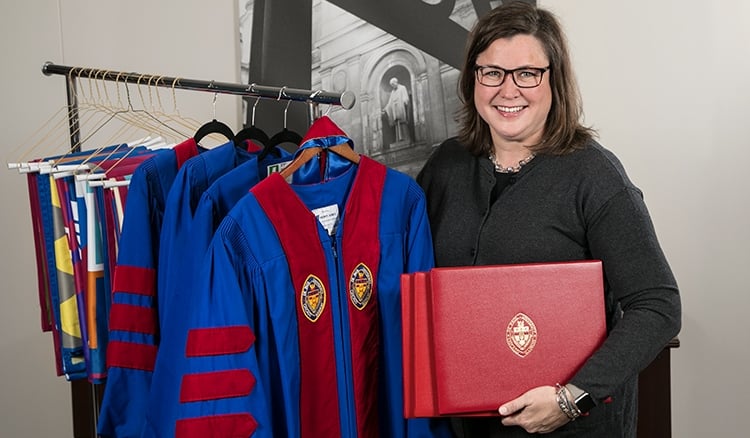 In a statement issued through a university spokesperson, Kramer apologized for the tweets, saying she was “incredibly sorry for the inappropriate and offensive things I wrote on Twitter several years ago.”

“When media asked a few years ago about these posts, I apologized noting I clearly said some things on my Twitter feed that I shouldn’t have,” her statement continued. “This should not overshadow my work with Special Olympics Chicago, the LGBT community (Gay Games, The AIDS Foundation, Gay Pride Parade etc.) and the numerous cultural organizations I have worked with during my time at the City of Chicago and Navy Pier.” 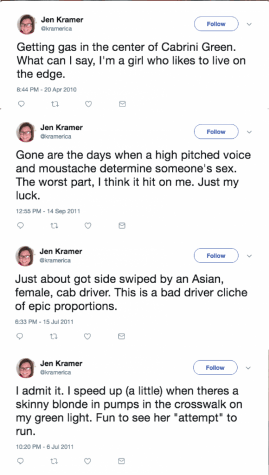 Kramer was hired as the Director of University Events in the summer of 2017 after holding jobs at Disney, Pepsi and the mayor’s office.

Her profile on DePaul’s website says that she likes musicals and riding her bike. She also likes “being a tourist in her own town.” She didn’t, however, like the old Cabrini-Green area on the Near North Side, home to the city’s notorious housing projects which were demolished in 2011.

“Getting gas in the center of Cabrini Green. What can I say, I’m a girl who likes to live on the edge,” she tweeted in 2010.

She wrote that she found “adventure” in “taking wrong turns in the ‘deep’ south side (sic),” using the hashtag, “#thatshowiroll.”

Vincent Obah, who just graduated from the Law School on Sunday, said that as a South Sider, he took issue with her depictions of his home.

“She’s essentially saying that it’s so bad (that) you can’t go there is simply not true,” he said. “It’s condemning all the people who live there without knowing them.”

Tomas House, a student who works in the Office of Multicultural Student Success, is graduating this year. He said Kramer’s continued employment is just more of the same. 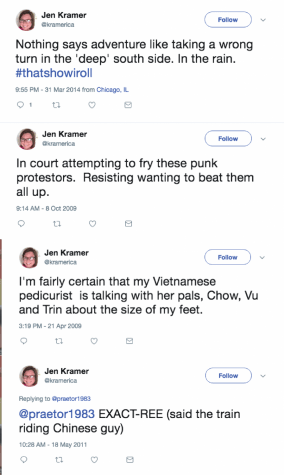 “I’m not surprised, it’s what I’ve come to expect at DePaul,” House said. “The only thing I can do is laugh anymore because it’s never going to change. It hasn’t in my time here, and I don’t think it will. I’m used to mediocrity.”

A group of students sitting underneath the statue of Father John Egan, who dedicated his life to the civil rights movement, were appalled that DePaul has hired someone who made insensitive remarks.

Tyra Grove, who was so offended by the tweets that she had to stop reading halfway through, said the school should be “embarrassed that they hired someone who would say those things publicly.” Her friend Megan Lucas called Kramer’s tweets “a horrible representation of our university and diverse student body.”

Echoing the Vincentian Question, student Izzie Smoczynski asked herself: “What must be done?”

“She must be fired,” she concluded.

When asked who hired Kramer and whether or not the university intends to stand by her, a university spokesperson declined to answer, saying they do not comment on personnel matters.

“I take responsibility for being insensitive and humorless and clearly will not make that mistake again,” Kramer said in the statement.

Jonathan Ballew contributed to this report.