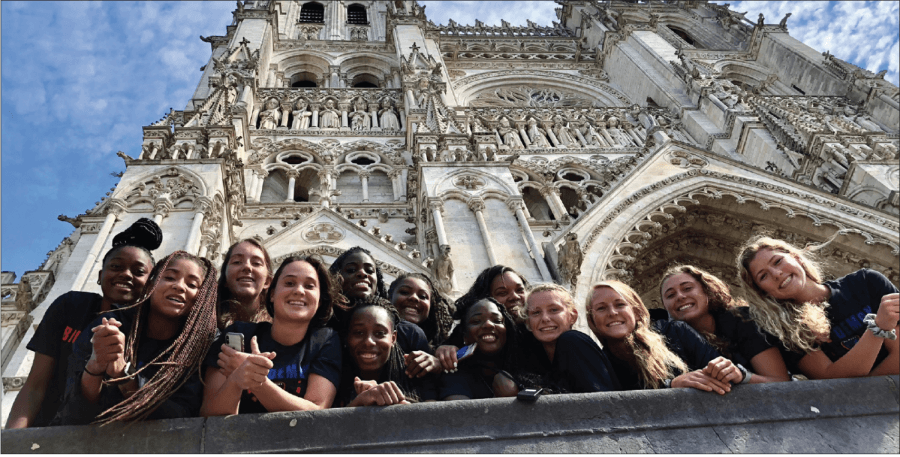 After many hours in the classroom, the DePaul women’s basketball team set off for an 11-day this past summer trip through France and Italy to learn about the life and works of St. Vincent de Paul and Louise de Marillac.

The trip was led by DePaul’s Secretary and Vice President for Mission and Ministry Father Ed Udovic and Assistant Director of Athletics Academic Advising Terri Sullivan, who assisted with the classroom portion of the course.

The trip had three priorities the team set out to achieve, the first of which was first education that not only focused on the Vincentian mission, but also included a trip to Normandy, the site of the D-Day invasion, and a trip to the Vatican in the latter part of the trip.

“The education level piece doesn’t just include St Vincent,” DePaul head coach Doug Bruno said. “It also includes the D-Day invasion at Normandy and the team having to study and learn about the concept that the people who were sacrificing their lives that day on June 6, 1944 were the same age that they were.”

Bruno added that for his players to have the opportunity to walk the beaches, sit in the pillboxes and understand the soldiers sacrifice was a major part of the education aspect. Sophomore guard Jolene Daninger called the experience “breath-taking” as the players, coaches and family on the trip toured Pointe du Hoc and Omaha Beach.

“It is hard to put into perspective exactly what these young men and women went through,” Daninger said. “But amazing to learn.”

The players also spent time studying the history of Rome, the Roman Empire, and the Vatican. While student-athletes don’t always have the opportunity to study abroad, Bruno credited DePaul athletic director Jean Lenti Ponsetto with developing the idea to not only send players abroad, but also incorporate the Vincentian element.

“This is something I’ve very thankful to Jean Lenti Ponsetto for because the St. Vincent study connection is all Jeanne’s,” Bruno said. “She came up with this 10 to 12 years ago that if we’re going to send our teams to Europe let’s have a constructive education piece about St Vincent and Louise de Marillac. So that piece is all Jeanne’s, Father Ed Udovic I can’t thank him enough. Jeanne, Father and the Study Abroad Program…”

Bruno also thanked donors and other contributors for helping student-athletes to have the opportunity to take the week-and-a-half-trip, while regular students may be able to take a semester or full year to study abroad.

“This has been a magnificent experience for my team, and for myself, this was once in a lifetime,” Grays said. “We are all very appreciative and grateful for the opportunity to come to Europe. Our trip has truly brought us together in so many ways—with the touring, the three games that we won, the countless amounts of UNO tournaments, the shopping and all the food we shared together. It has been quite the adventure.”

Amidst all the travel, the team also played and won three games against opponents Bruno said were comparable to a Division 1 opponent.

“To be able to get the players on the floor and see how the freshman are going to assimilate to get this done in August and not November,” Bruno said. “[And] to get the 10 practices that the NCAA lets you have before you go over to Europe, these are all the benefits of the trip.”

Bruno said the trip was especially beneficial for the five freshmen who had the opportunity to use a little bit of trial-and-error to see what would work at this higher level.

“The biggest benefits for the freshmen are there certain things you can’t do as a college player without experience, and it gave experience,” Bruno said. They got to get on the floor against a higher-level athlete than they’re used to playing in high school, they got to test out their own games. Even the best freshmen may have to tiptoe, putting their foot in the water and does the stuff that worked in high school, work now at the higher level.”

Bruno was also thrilled to see Daninger and Dahlman back on the court, as well as, junior Dee Bekelja who started all three games.

“For Rebekah to get back on the floor,” Bruno said. “Get her more comfortable with how we play here at DePaul I think that was huge and Jolene it was great to see Jolene Daninger back on the floor because we recruited Jolene to play basketball and she had a very tough freshman year, was not physically able to play, so it was great to see her play.”

Although she did not miss last season due to injuries, Bruno was proud of the way Dee Bekelja performed starting all three games and scoring 29 points on the trip.

After a week and half off back at home, the Blue Demons returned to work as they get get ready to open their season Nov. 9 against UW-Green Bay.