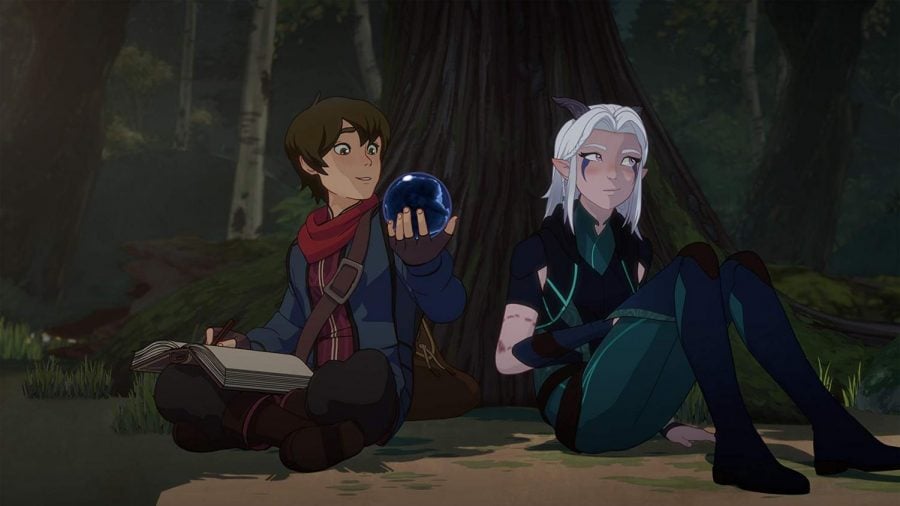 “The Dragon Prince” is a new animated show on Netflix taking place in a fantasy world where elves and humans, who once lived in harmony, are locked in a seemingly endless struggle. Elven hatred for humans is at an all-time high after a group of human soldiers killed the king dragon-protector of the elven border, and destroyed his only egg. The show primarily follows a young prince named Ezren and his half-brother Callum who discover that the dragon egg was merely hidden and seek to return it to the elves, bringing peace to the land.

Before I go into deep-dive mode, I’ll say that I very much enjoyed what this show has to offer and am crossing my fingers for more seasons. It is geared toward a younger audience, but I believe it has appeal beyond that and I highly recommend this to anyone interested in light-hearted fantasy tales.

I’ll also mention that the animation is — strange. I’m not going to try to interpret how it works, but it seems like some frames have been cut out, and as a result some characters feel like they’re floating. As a result the animation feels choppy. For some this will be a deal-breaker. I urge you to stick with it for at least three episodes, as I found it didn’t bother me as much as I thought it might. Still, I would hope in future seasons, the stutter could be altered a bit.

As amazing as the world and story of “Avatar” is, the incredible characters are perhaps my favorite part, feeling fleshed out and real. Ehasz was a big part in that. To expect that level of mastery again is unfair. Perhaps it’s because I watched “Avatar” twice this summer, but I couldn’t help but continually compare the two shows.

I see “Avatar” in the world “Dragon Prince” is trying to build. The Asian inspired world of “Avatar” is now a more familiar fantasy setting, featuring dragons, elves, humans and more. While certainly not quite as intriguing as discovering, bending or uncovering how each elemental culture lived in “Avatar,” this world clearly has interesting stories as well. Every elf and animal in the world is connected by a uniting magic energy. That comes in six different elemental forms: sun, moon, stars, sky, ocean and earth. Sound familiar? We get glimpses of several of the elven groups (one for each source), yet only explore the Moonshadow elves. What are the other groups like? What do the magical elven realms look like in general?

I see similarities in the story each tells. In “Dragon Prince,” we have a once- peaceful land that is now divided by war. The formerly united continent has been split into two realms: Xadia, home to the elves, and the Human Kingdoms. Years pass and two princes, Callum and Ezren, find the egg located in the basement of their castle. Now they are searching for a way to bring peace back to the world.

The set up is eerily familiar. But in a way, that’s a good thing. The stakes are high and the story has many places it can go before the end is reached. Who knows what will happen and what strange characters may be met to shape their journey.

The characters are not quite as memorable as “Avatar’s” but that is to be expected. Prince Zuko was a pretty two-dimensional villain for the first 11 episodes. In “Dragon Prince” we get a well-developed villain who already has an established relationship with the heroes. The protagonists are faced with many difficult choices, with some bringing out dark results. We get some quirky side characters with loads of diversity as well (the creators have stressed this as a point of emphasis).

It all moved a little too quickly for me; the plot pushed forward at a breakneck pace. The emotional moments passed a bit too quickly and not as much time was spent learning about the characters as I would have liked. Not as much time exploring the world either. This is all completely understandable considering they were given only nine episodes to tell their story.

If you watch “Avatar” again, you’d find that the second and third seasons were more enjoyable than the first, and it isn’t until we really know the world and the characters that things get going. With what I have seen, “The Dragon Prince” team can provide similar improvement with a few more seasons. Given time, I believe we will discover an amazing world.

Given time, I believe the story has the potential to go incredible places. And given time the already intriguing characters can become as memorable as those in “Avatar.” I believe “The Dragon Prince” will be great, but it has a ways to go before it gets there. But I believe, however, that Callum and Ezran can save the world.