Reading the news these days, one might come to the conclusion that millennials are destroying industry after industry. But locals say that such a trend is not so in Chicago’s West Loop.

West Loop has been named the country’s “top millennial hot-spot” in a recent report by residential rental website RENTCafe.com, which says 73 percent of the urban neighborhood’s residents are Millennials. According to the most recent American Community Survey (ACS) the neighborhood saw an 11.5 percent increase in population between 2015-2016. The Millenial presence has led to significant changes in the area.

“You rarely see condos anymore,” said David Clark, a millennial West Loop resident and NOWL board member. “Everyone rents. It’s a part of the shift from owning things that hold you down, and speaks to the more flexible and fluid nature of living these days.”

The design of these buildings has also seen a shift as millennial population continues to rise.

“City plans have begun to reflect millennial lifestyles,” Letourneau said. “I don’t want to generalize, but Millennials seem to be driving fewer cars. With this transportation transformation in mind, planners are catering to this concept by designing new buildings to have less indoor parking space and more places for Ubers to drop people off.”

The high density of millennial residents in West Loop has also brought an influx of business to the area. Major companies including Google and McDonalds have moved their headquarters to the quickly-growing neighborhood. The Companies Pinterest, CareerBuilder, and Ferrara Candy have also announced moves this summer. 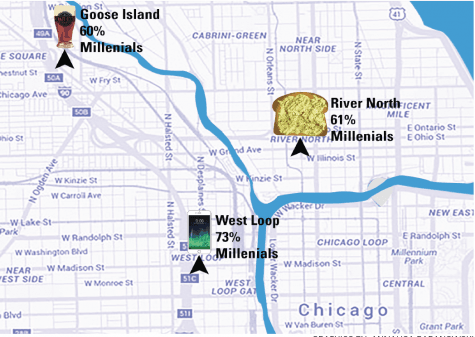 Millennials have done more than draw big business, however – local businesses are thriving in the area too. Formerly home to factories and warehouses, the West Loop has been transformed into a pinnacle of boutiques, art galleries, and restaurants.

“Retail and restaurants have been around in the area since the early 90s, but didn’t catch hold until later,” Clark said. “From a millennial standpoint, shopping and going out to eat is higher up on the list of things to do, so we’re seeing new types of businesses bringing in younger crowds.”

But Millennials have not been the only demographic to benefit from the surge in West Loop interest. The other 27 percent of West Loop residents, comprised of primarily Baby Boomers and Generation X, say they’ve benefitted from their increase in millennial neighbors.

“There’s nothing I love more than riding a bicycle,” said Jack Zimmerman, West Loop resident since 1999 and non- Millennial. “Because young people are moving in, many of whom do not have a car, the city wants to take care of them. There’s now an incredible support for biking, and if it wasn’t for young people, we wouldn’t have this, because old people don’t like to bike—except me.”

On another end of the spectrum, the rapid millennial-aged population growth spurt has led to improvements in West Loop’s schools, specifically Mark T. Skinner West Elementary School. Rated the number one public elementary school in Chicago by Chicago Magazine, Skinner Elementary is in the process of being expanded. The new annex is expected to be opened in 2019.

“Now that a lot of millennials are starting families or have kids close to grade school age, Skinner is being significantly expanded,” Letourneau said. “And if these kids stay on the West Side, we could have a chance to bring a brand new high school to the area. This could help their educational experience to significantly improve.”

Chicago as a whole may already be reaping the benefits of the West Loop’s millennial inundation. New and familiar businesses are bringing jobs; McDonalds recently-opened headquarters alone was projected to bring roughly 960 new jobs to the area, according to the office of Mayor Rahm Emanuel.

But West Loopers say they are more focused on the neighborhood they call home.

“I see the city reinventing itself from the center core, and I’m sure these changes will eventually reach the neighborhoods,” Zimmerman said.“But for now, West Loop is just a place young people want to live. My building alone is a good mix of people, and it’s kinda wonderful not having to always deal with people your own age. Millennials bring a lot of desired energy.”