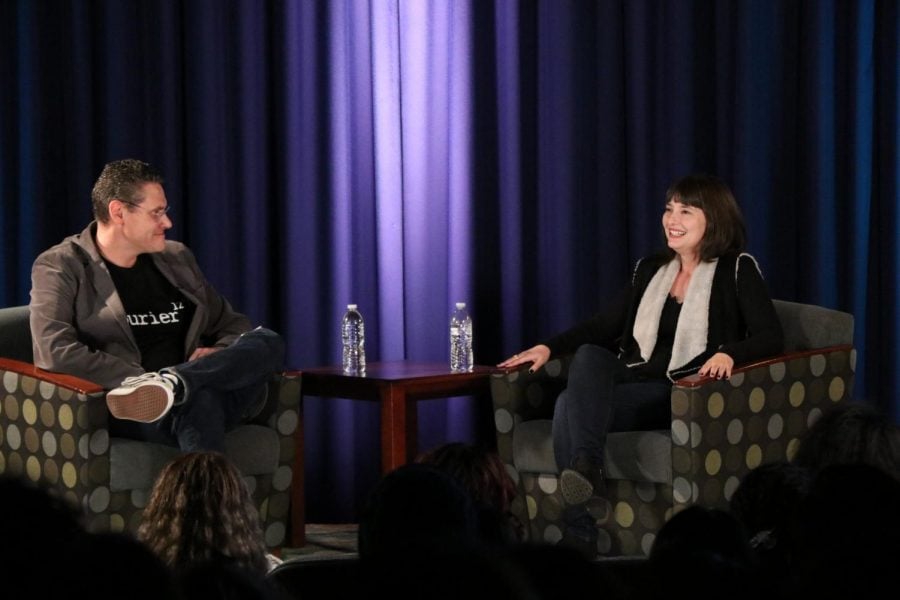 Saturday saw what director and DePaul professor Wendy Roderweiss has described as “the biggest and most challenging event in the CDM.” That event was Courier 12, a five-panel conference tailored specifically for screenwriting majors and other CDM students to connect with industry professionals and other entrepreneurs in entertainment.

This marks the third annual Courier 12 conference, which Brad Riddell, an event organizer and screenwriting professor, says is the “most exciting.”

“We’re covering a lot of ground this year,” Riddell said. “Through the years we’ve had a number of Emmy winners and Academy Award winners. This year, we have a very diverse set of panelists that range from writers from sketch comedy, hit TV shows and big blockbuster movies. It’s just a really great way to bring Chicago writers together.”

Riddell kicked off the conference with an introductory anecdote about legendary filmmaker Frank Capra and his crew of writers and concluded with, “Without our work, nobody works.”

The first panel for the conference was titled “An Improvised Life Through Hollywood” and it featured Trevor Albert and Dick Blasucci discussing their own unconventional success stories in the business.

Albert discussed how he charted a complex path through becoming an assistant to Barbara Streisand’s poodle to assisting her then-boyfriend Jon Peters at Warner Brothers, which then landed him a gig on the set of “Caddyshack” as the assistant of the film’s director, Harold Ramis. Albert stressed how Ramis demonstrated “The Second City Way” in always being open and accepting of collaboration on his sets.

Blasucci talked about how his friendship with John Belushi ended him up with a gig at The Second City and how that gig snowballed into writing work on acclaimed sketch shows like “SCTV,” “MADtv” and “Muppets Tonight.”

Albert and Blasucci concluded that “there is no two stories that are the same when it comes to making it in the industry.”

While the panel was full of one-liners and funny banter, Albert and Blasucci hit solid, poignant notes frequently. Notes such as to be open to the unexpected, to always work for the good of the show, to write what you think is funny, to not play down to your audience and to seek out mentor figures like they had with Ramis and Belushi.

“It’s not about being funny or smart,” Albert said. “It’s about doing it.”

The second panel was titled “The YouTube Launchpad.” This panel was a discussion between Riddell and popular YouTuber/podcaster/author Allison Raskin on the evolving platforms for creators in the entertainment industry. The panel started with a video from Raskin’s YouTube channel with her partner Gaby Dunn called “Just Between Us.” The channel focuses on couch discussion and sketches created by Dunn and Raskin.

Raskin discussed how her experience in film school and building her YouTube channel helped her realize she was a commodity. She used this to spread out her creative inputs into writing her book “I Hate Everyone But You” (in the panel Raskin also let it slip that she’s working on a sequel titled “Please Send Help”) and creating her own comedic soap opera podcast titled “Gossip,” which Raskin stated is the one thing people should turn to to best understand her as an artist.

When I asked Raskin after the panel what she hopes a student’s main takeaway from her panel would be, she said, “I think that you just need to have a lot of projects and also it’s a numbers game so the more you have it’s okay the more that fail. Cause you’ll have some that make it through.”

The strong thread connecting the panels was simply doing the work, and it was no different with Raskin.

The third panel was titled “The Culture of the Writers Room” – a discussion with television writing and production professor Jose Soto and “Jane the Virgin” writer Rafael Agustin.

The panel was mostly focused on Agustin’s complex and emotional journey to getting into the business. Agustin said “I was the All-American high school student, except one thing.” This “thing” is the fact that when he was 17-years-old, Agustin discovered he was an undocumented immigrant. Because of this, he had to attend Mt. San Antonio College while he waited for his citizenship papers.

It was at Mt. SAC that Agustin said he discovered theater and his love for entertainment. After maxing out his credits, Agustin finally received his green card and his acceptance into UCLA. Agustin talked further about his work, such as his play NWC, something that he described as “a social justice comedy piece telling the personal stories of race in America.”

The most emotional moment of the panel came when Agustin talked about being the Alumnus of the Year for Mt. SAC. After giving a long heartfelt speech, he was welcomed off-stage by a large group of undocumented students. It was that moment that Agustin says he realized he had “to write us into existence,” a phrase he repeated a few more time throughout the panel.

Agustin’s way of writing them into existence is his newest project in- development tentatively titled “Illegal,” a show he describes as “‘The Wonder Years’ for undocumented immigrants.” He workshopped the show for a full year with the Sundance Institute and garnered support from “Jane the Virgin” star Gina Rodriguez.

After the panel, Agustin said, “Everyone has a story. It’s about just like who is empowered enough to tell their story. Who has taken the time to develop and to craft and to tell their story,” he continued. “I once heard from a professor that you don’t become a good writer until you’re like in your 40s because you either have a lot to say but you don’t know the craft or you know the craft but you have nothing to say.”

The fourth panel was “How to Win an Emmy” with Anna Marie Hozion and Megan Amram. Amram was a writer on the popular sitcom “Parks and Recreation” and currently writes for “The Good Place.” She has garnered a lot of fame for her Twitter page and her recent grassroots campaign to win an Emmy for her web series “An Emmy for Megan.”

In the panel, Amram came out wearing an Emmys T-Shirt as a memento of her successful FYC campaign. Amram discussed with Hozion her career in comedy writing from the 2011 Oscars to “The Simpsons” and now “The Good Place.” In my brief interview with her, Amram discussed how her popular Twitter presence brought her to DePaul, saying that it was because of a shoutout from a random user named “Ellie.”

A big thing Amram focused on was looking at what you are personally obsessed with and making comedy or entertainment out of it. “I think that my piece of advice is to write about something that you care about and that makes you feel something,” she said. “You know, a lot of people can write funny jokes but writing something that connects with people is what’s gonna make you stand out.”

The fifth and final panel was “Finding A Quiet Place” featuring the screenwriters Bryan Woods and Scott Beck with Scott Meyers of the 2018 blockbuster hit “A Quiet Place.” Woods and Beck have been best friends since childhood and together they embarked on what they referred to as a “grassroots film education,” making their own creative and distinct short films.

Both Woods and Beck went on to attend the University of Iowa where they developed the idea of a silent film centered on a grieving family in a world of monsters. That script was only fifteen pages long and went on to become “A Quiet Place” as an unconventional, sixty-seven paged script that sold to Platinum Dunes and Paramount in a quick green light process.

Now Woods and Beck are developing projects with the likes of Stephen King and Eli Roth and focusing on trying to bring more filmmaking back to the Midwest. When I asked Beck what advice he might have for other Midwestern people looking to get into the industry he said, “Follow what you’re passionate about and make sure that’s at the forefront of kinda every decision you make. And know that you’re gonna fall on your face but that doesn’t mean anything other than like that’s part of the process. You can keep on going and you’re going to find some sort of success.”

This year’s Courier 12 ended up being an anthem for unconventional paths to success in the industry shared with a few diverse, creative and unique voices. After the event, I asked Riddell how he thought it went. “I think every year I think it can’t get better and it always does. And I think that’s a testament to our faculty who work hard to bring relevant artists to the school that people want to hear from and to the student workers who give up days and days of time to make this happen and then just to the amazing people who come out to hear,” he said. “We have plans to continue with Courier 12 and make it even bigger and better.”