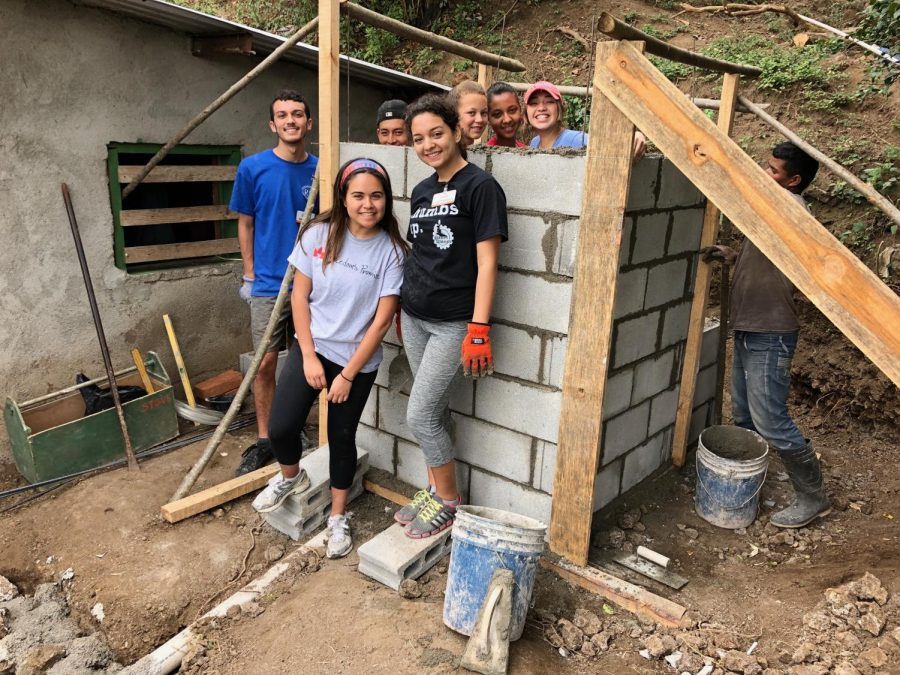 For the right reasons: DePaul group counters stereotypes of ‘voluntourism’

In a world where every single action is analyzed by the masses and there is seemingly no route to avoiding criticism altogether, even the best intentions have become controversially decried as problematic.

Amid the criticism of an industry centered on making volunteer work a vacation excursion, DePaul’s chapter of Global Brigades is not only planning eight trips across the world for students this academic year, but are also actively trying to fight the problematic aspects of the growing phenomenon.

Every Tuesday evening, the 28 members of Global Brigades’ executive board cram into a room on the third floor of the Student Center to update each other on their respective responsibilities. The national entity of Global Brigades credits itself as the largest student-led movement for global health. The organization relies heavily on individual chapters at universities across the country to provide funds and manpower to complete the global projects designed by the non-profit.

One might assume with five trips planned for locations in Honduras, Panama and Ghana before the end of the calendar year that the meeting would consist of hectic logistical planning, but rather, the group, who appear to genuinely care about one another, keep a light-hearted atmosphere and discuss opportunities to volunteer in Chicago before their “vacations.”

While other voluntourist organizations prey on vacation-goers who want a sense of purpose during their extravagant trips to developing countries, Global Brigades utilizes the revolving door of undergraduate students to recruit for their programs. The average tourist is naturally drawn to the exoticism of these distant lands, but the college-aged leaders of this organization are careful to not let peers sign up who are simply looking for a fun spring break. “We always ask potential volunteers how they plan to avoid being a voluntourist,” said Lynn Kannout, one of the DePaul chapter’s co-presidents.

Kannout, alongside Megan Boone, serve as the leaders of DePaul’s Global Brigades and they are both very conscious of how the type of work they do has been portrayed in recent years and constantly try to counteract those notions. “Our biggest focus is sustainability,” said Kannout. “Virtually, Global Brigades is working itself out of a job.”

One of the biggest criticisms of the voluntourist industry has been the lack of focus on long-term change. For example, while a week-long trip to build a school is good in theory, the absence of foresight to staff it with teachers, provide supplies and put families in a position where they can send their children makes the project for naught. This is why Global Brigades’ commitment to ensuring community buy-in to their mission is necessary.

“We don’t just give anything away. Part of the cost is also paid by the community,” said Boone. “They’re more likely to use (the things brought in by the Brigades) because they invested their own money in it.”

While the tangible effects of the trips are a constant source of debate, so are the problematic implications of affluent students believing they need to save communities that are different than their own.

H. Peter Steeves is a professor of philosophy and director of the Humanities center at DePaul. He believes these types of trips are not only not always helpful, but at times even damaging. “In the mega-machine world that we have, the best of intentions can be used to do things to support the system that is, in fact, part of the problem,” said Steeves.

He made it clear, however, that he in no way wants to criticize the individuals who participate in these programs as “they almost always have the best intentions,” but that the industry and overarching philosophy of it is flawed.

What Steeves is alluding to is the notion of the white savior complex. It is the idea that people of privilege, through a usually subconscious feeling of superiority, believe that they can always be of help to those viewed by themselves as “less-fortunate.”

Author and contributor to publications including the New York Times and the Atlantic, Teju Cole, has said that the complex is “not about justice. It is about having a big emotional experience that validates privilege.”

Global Brigades, again, understands this and tries to instill in their volunteers a mentality separate from the one perpetuated in the complex. “Global Brigades doesn’t use the world ‘help.’ We don’t say we’re going to help or save a community,” said Kannout. “We work with these communities. We collaborate with them.”

Additionally, the executive board is far more diverse than the traditional perceptions of voluntourists tend to be, but at the end of the day, all members are still students at a pricey private university. Can awareness of the problems associated with being a well-off volunteer in developing countries counteract the problems themselves? Steeves doesn’t believe so.

Within our current system, Steeves says it is impossible to commit a selfless act. “The definition of the self that you and I have comes to us from Hobbes, Descartes, Locke, Rousseau and their view of the self was that it was inherently egoistic, selfish, isolated,” he said. “In a liberal structure, the self is defined as something that can’t be selfless.”

While the intentions of individual actions can always be disputed and nearly never truly proven, Global Brigades has taken the time to at least ensure the work that is being done is productive. The students may only travel to these destinations for a week, but the international entity of Global Brigades maintains a presence in these communities for years to ensure that the work had a positive impact and focus on maintaining the progress that was made until the next drove of wide-eyed students travels through.

According to Alexis Gonzalez, a former executive board member of DePaul’s chapter, there is also a yearlong focus on intentionality with the volunteers to make sure they go in to the trips with the right approach and upon return, are able to articulate their experience in a manner that not only reflects the goals of Global Brigades, but more importantly not infringing on the autonomy of the individuals who welcomed them into their lives for the week of their excursion.

Even with this understanding and focus on a guided mentality, by their own admittance, these programs are not always successful at conveying the mission to general members. “No matter how much you talk about it and try to hone in on it, not everyone is going to listen. Not everyone will be on the same wave length,” said Boone. Whether it’s problematic Instagram posts or mindless interactions with the members of the communities these students are volunteering for, it is impossible to ensure that the intentional approach is universally received and implemented.

Ultimately, these volunteers are providing a service and it would be difficult for anyone to say their work is morally reprehensible. However, in a world of absolutes, it is crucial to examine the ambiguities of what we deem as right and wrong and, furthermore, productive and unproductive. During his interview, Steeves alluded to a famous saying by Socrates to sum up this challenge: “The unexamined life is not worth living.”