In memory of MoviePass 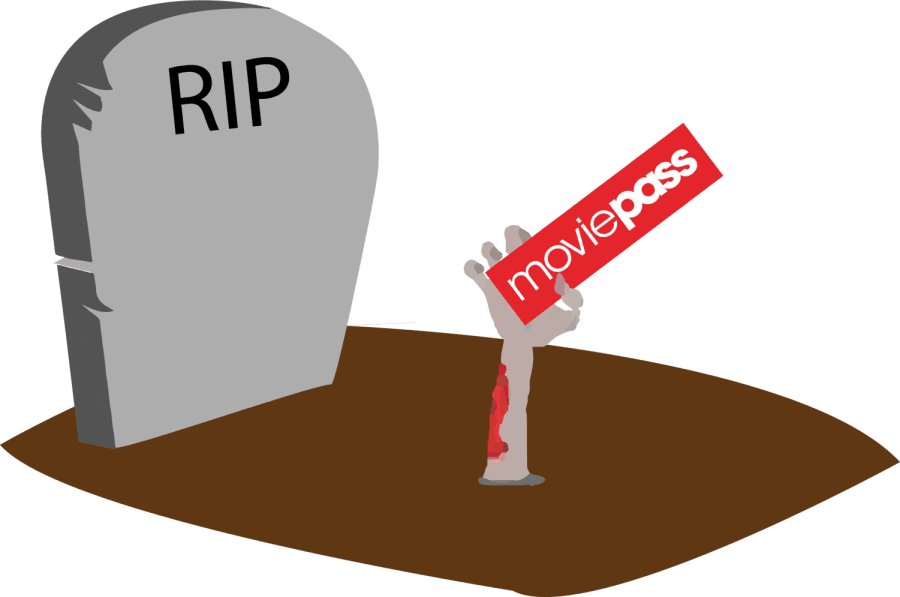 MoviePass, age 7, may have finally escaped this mortal realm this month following an approximately year-long battle with its user base. The proverbial final nail in the coffin for the movie theater subscription service may have come this month with news of customers being unknowingly re-enrolled in the program— the latest in a long string of customer service issues.

Much of MoviePass’ life has been defined by the likelihood of its inevitable death. First arriving on the marketplace in 2011, the service has been called ‘too good to be true’ for a reason. Paying just $9.95 a month would allow subscribers to see unlimited movies each month, one movie per day. Subscribers could potentially see more than $300 worth of movies for less than the price of a single ticket at AMC, all the while MoviePass themselves would be paying that bill.

The service has been incredibly popular, exceeding three million paying subscribers this June. At that time, MoviePass estimated that they would reach five million subscribers by the end of 2018.

When MoviePass came onto the market, the program seemed to offer a chance for some students and other people who struggle to afford today’s movie-going scene a chance to see many additional movies each month. Joey Traverso, a senior in the CDM Directing program, was asked by the DePaulia last September about MoviePass. While he expressed hesitancy, especially given the friction between the company and theatre chain AMC, he did eventually buy into the program for about nine months.

Now, he’s MoviePass free, having officially canceled his account. Traverso says the experience has left him with little respect for the company. “I do not regret the time I had,” he said, “but their shady business practices, lack of transparency, and their unsustainable business model made me cancel.”

The last year of MoviePass has been plagued with financial difficulties, most notably this July when customers were blocked from seeing the newest “Mission: Impossible” film due to the company not having enough money to pay for any more tickets. Since the incident, MoviePass has buckled on its original unlimited-movies promise, only allowing customers to see three movies for free a month. What’s caused even more frustration from the user base is that the company now chooses the up to six movies that customers can choose from.

“The old saying is that the big letters giveth and the small print taketh away,” notes Michael Lynch, a professor at the School of the Hospitality with an expertise in customer relationship management. “I don’t think that MoviePass was as upfront with their customers when they went through the sign up process, to help them understand really what their membership meant.”

Lynch points to MoviePass not understanding who exactly their core demographic was, and what they wanted out the program as a primary reason for its swift fall. “What they identified as their core demographic for the product ended up not being the people that chose to subscribe, and because of that they ended up with people that were just profoundly disappointed,” said Lynch. “Thus they had to change their rules to try to become profitable, and ultimately the people who signed up for the subscription were not getting what they felt they were paying for, or what they really wanted.”

MoviePass made news lately that it had taken in a $65 million more dollars in funding, although this did little to calm nervous inverters and more-so raised concerns about where the money had come from. MoviePass says this funding was from prepayments of an existing investor who they have yet to name.

The company has also come under fire for what people saw as shady business practices, with MoviePass this month sending customers an email requiring them to opt-out of enrollment or be risked being charged for another month. MoviePass says that this was only for a select-group of customers.

“To be clear, unless you opt out, your unlimited subscription will be restored and you will begin enjoying unlimited movies again,” read the email.

This lead to outrage from a number of customers, some of whom claimed that they had already cancelled their MoviePass by this point. In response to this reaction, MoviePass released a statement to Business Insider that they had left these accounts “suspended in an abundance of caution and are now offering them the opportunity to return to the plan that they originally like.” They continued to refer to the issues as “a terrific one-time promotional offer.”

Is there any hope for MoviePass to make a recovery, or is it too far gone? Only time will tell, however Lynch compares the last few months for MoviePass to a car slamming into a brick wall. “My suggestion to MoviePass would be that they totaled the car, and if they choose to get back into this market to do it under a different name, to do it under a different everything, so it’s not even really even identifiable with MoviePass.”

While Michael Flores, a film professor here at DePaul, never bought a MoviePass for himself, he did gift one for his parents as a Christmas gift. As much as that gift might be giving his parents limited options now, Flores believes that the ideas behind MoviePass is something that will likely live on for much longer than the actual service. “If you had asked me about the state of movies a couple years ago, I would have been like, “movie theaters are probably going to be dead soon,” said Flores. “[MoviePass] proved that people do want to go out and see movies, people don’t always want to stay home and watch Netflix or whatever’s streaming.”

Flores also notes that services like MoviePass don’t only give consumers a cheaper option for going to the cinema, they also give extra incentive to see stranger, more independent films that they wouldn’t otherwise want to spend extra money to see on the big screen.

The vast popularity that MoviePass attained over the last half-decade has clearly been noticed, and now a number of other subscription-based theater programs are fighting for the crown. The AMC Stubs A-List program, which allows customers to see three movies of any format (IMAX and 3D included— something MoviePass lacked) for $19.99 per month, has attained 400,000 subscribers in the 14 months since it hit the market.

Flores believes services like A-List will become more commonplace in the future, saying that while they cost more than MoviePass, they present more security for customers. “In the end, all MoviePass is providing is a ticket, and they’re counting on a third party to provide the ultimate end product,” notes Lynch. “And that can be dangerous.”

A September report by mobile-data insight company SensorTower found that first-time downloads of the MoviePass app had dropped by 76% in three months. The writing seems to be on the wall: new users are going down, while older users are dropping the service in favor of newer, more reliable options. “It was great while the service was consistent and while it lasted,” says Traverso. “As an active A-List member, I am happy with the way it changed movie going.”

MoviePass is survived by substantially less than the five million subscribers it was hoping it’d achieve this year.