A performance plagued by politics, pressure 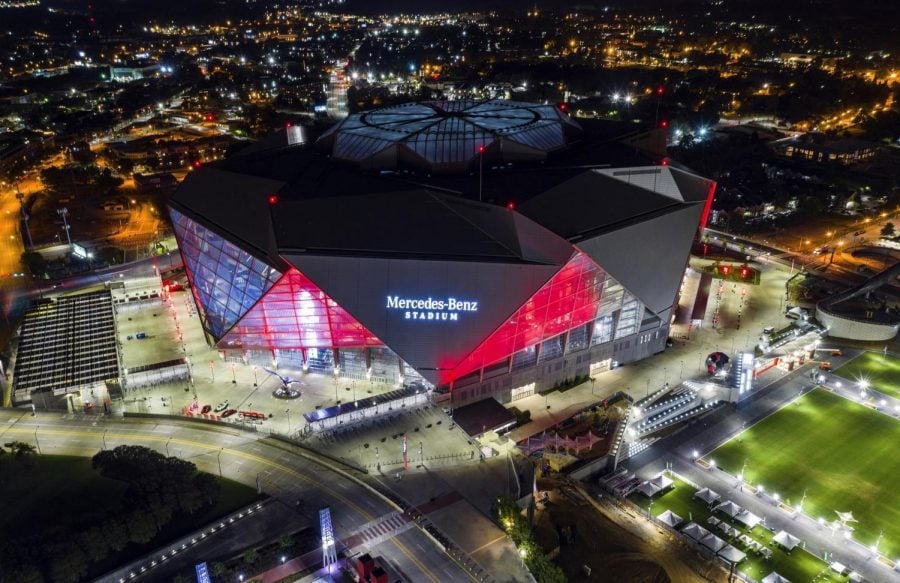 Mercedes-Benz Stadium in Atlanta will be the site of Super Bowl LIII on Sunday, Feb. 3.

Justin Timberlake, Coldplay, The Who, Usher: These musical artists are among a handful to have performed at the Super Bowl halftime show over the past decade, often to uproarious upset on social media platforms and in living rooms across America. Just last year, Justin Timberlake was berated on Twitter after an attempt to fashion his Super Bowl halftime into a heartfelt Prince tribute, whereas Katy Perry’s 2015 performance was widely mocked for its outlandish shark costumes and choreography.

The NFL, it seems, has yet to perfect that magic formula for mass appeal, but can we expect it to? The idea that all Americans will raise their collective glass to one artist is long-gone, wishful thinking, especially in an age that has proven more polarized than ever on everything from White House politics to rap music.

“I’m guessing at least half the [Super Bowl] audience only watches for the commercials and music,” said Scott Vyverman, senior lecturer in DePaul’s College of Communication and faculty adviser of Radio DePaul. “Based on this hypothesis, I think at least half the audience will complain about the artist(s) no matter who they feature.”

With this in mind, it’s time to cut the NFL some slack as it continues to attempt the impossible: pleasing over 100 million annual viewers.

Though past halftime artists have varied drastically in age and musical genre, there’s no contesting the NFL’s reliance on mass appeal in selecting a Super Bowl performer. For one thing, the NFL has made a conscious effort to avoid controversy in the performers it ultimately shortlists.

“It would be highly unlikely for an artist embroiled in controversy or with a poor reputation to be chosen,” said Samantha Close, a professor of Communication and Media Studies at DePaul who at present teaches a course on sports fandom. “Think R.Kelly now that evidence is piling up about his sexual assaults.”

With this year’s game hosted in Atlanta, the NFL had a golden opportunity to recruit local success stories. Rapper T.I. arose as a worthy contender in this pool of homegrown talent but was ultimately cut from the list. Sports writer Jesse Washington of “The Undefeated” pins this decision on the rapper’s recent controversies.

“Even if his latest video didn’t depict a Melania Trump look-alike stripping in the Oval Office, Tip’s intentions to boycott the NFL seem rock-solid,” Washington said.

Indeed, in recent years tables seem to have been flipped, with musical heavyweights now rejecting the NFL and its controversies as opposed to vice versa. Just last year, Rihanna turned down her shot at the halftime seat in protest over Colin Kaepernick’s expulsion from the NFL.

The NFL’s halftime act pairings also have a history of cross-generational appeal, the most striking case being Madonna’s 2012 headline performance alongside Nicki Minaj and Cirque du Soleil. Did this check all the generational boxes? No. Needless to say, there were older viewers left dissatisfied with these choices; however, it’s still no easy feat to successfully corral an 80s pop darling, flourishing rap artist and family-fun French circus into one jam packed half-hour performance. In recent years, the Super Bowl has upped its minority viewership, and this too has not gone unnoticed by the NFL in its halftime show decisions. Over the past five years, half of the main performing artists at the Super Bowl have been people of color, a proportion projected to only increase.

But what about the “real” fans of football? The avid game-betters who track their teams’ progress all season and, more importantly, represent the primary demographic for NFL viewership: white men ages 55 and up? Some believe this demographic should have a stranglehold on the selection of artists showcased at halftime, and for any other game in the NFL season, I would agree with that sentiment. However, to me, the Super Bowl represents something different entirely: the one NFL game with the power to attract a heterogenous slew of viewers in addition to its typical demographic. Rather than cater to the average Sunday night viewership, why not use halftime to celebrate the Super Bowl’s unparalleled status as a unifying American sporting event?

As Close puts it, the ability to “catch the cultural zeitgeist” of the Super Bowl and the variety of people tuning into it should be the primary selling point of a halftime performer. There’s no doubt the NFL will continue to endure missteps as it wades through potential halftime artists, but so far, it’s stayed on the right track by appealing to the stunning diversity of viewership it has for one night, and one night only, each year.