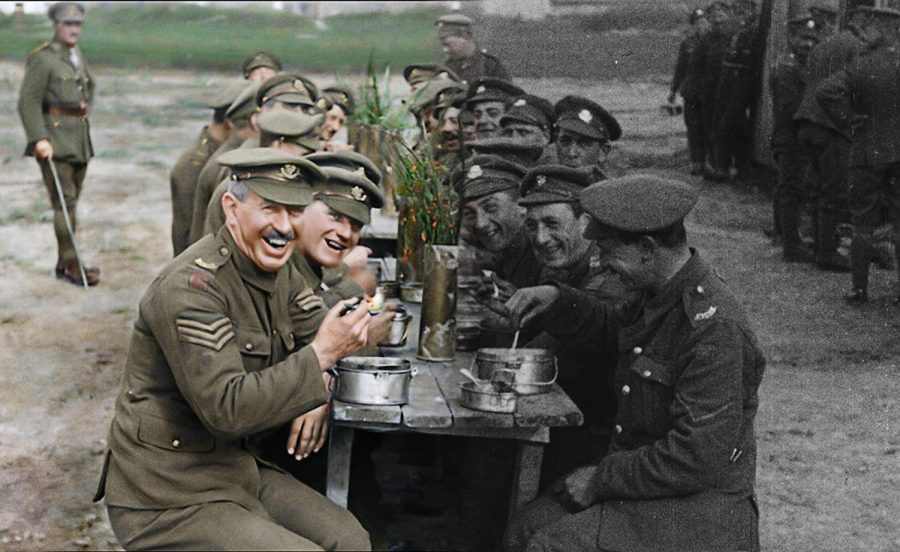 Original film stock of images during World War I have been digitized and colorized, shining a new light on the first World War for history buffs and casual viewers alike.

It starts out ordinarily enough: the stoic voices of soft-spoken British soldiers— tightly edited so that when one stops speaking, another immediately starts—recounting their experiences signing up, getting recruited and going off to train for battle on the Western Front in World War I. The footage, from the British Imperial War Museums, is black-and-white, choppy and flickering. The characteristic sound of an old film reel whirs and clicks subtly in the background.

Get past the first 15 to 20 minutes, which are interesting but typical of any number of History Channel documentaries on the Great War, and director Peter Jackson’s “They Shall Not Grow Old” really begins to give you what you paid for: the much-hyped colorized, sharpened and re-timed footage of British soldiers in action from a century gone by. This is about as close as anyone is ever likely to come to understanding the real, lived experiences of these men and boys, many of whom were as young as 16—in some cases, even younger. Using the latest techniques, Jackson’s company Wingnut Films and post-production house Park Road Post combed through 600 hours of interviews with veterans and 100 hours of vintage film footage. They cleaned it up, smoothed it out and added a period-accurate color palette to bring it to life.

As Jackson points out in a 30-minute “making of” featurette that played after the credits at the Jan. 21 screening I attended, this isn’t the first time old war films have been shown in color. But it is the first time frame-by-frame colorizing has been paired with an entire soundscape of original foley effects and dialogue lines that tell us, for the first time, exactly what the soldiers were saying in these old clips. Whether it’s the shuddering quake of artillery fire, the clomp of boots through muddy trenches, the creaking and chugging of Mark V tanks rolling along the frontlines or a soldier making a bemused comment about the cameraman filming him; it all adds up to an immersive viewing experience that feels unlike any other World War I documentary out there. Jackson and his team recorded these sounds from scratch using real period military machinery, weaponry and actors matching their words to the lip movements of the soldiers.

And while the technical merits of the film are obvious, the film’s story isn’t very technical at all. Jackson notes that his film is “for non-historians by a non-historian,” and to that end there is very little mention of specific battles, campaigns or tactics. Some war buffs may yearn for such details, but it arguably makes the film more accessible. Tune in for the sound design and visuals, not tales of war room brinkmanship.

Not all of the film’s hour-and-a-half runtime is filled with footage. The embedded war videography we’re used to on today’s nightly newscasts didn’t exist in 1914; there’s no footage of close-quarters combat or bayonet battles. Instead, Jackson fills in the gaps with Ken Burns effects, pans and tilts over illustrations from his personal collection of “The War Illustrated,” a British magazine from the same time period as the war. Also used are an assortment of old cartoons from the British humorist Bruce Bairnsfather that for me evoked the watercolor work of Bill Watterson, creator of “Calvin and Hobbes.”

The film is rated “R” for “disturbing war images,” and there are plenty. Piles of rotting corpses, their bodies teeming with insects, are juxtaposed against the smiling faces of the nameless jovial gentlemen we’ve met earlier. Dead rats lie in a heap, their dirt-encrusted hides perforated with either stab wounds or gunshots from irate soldiers. Weary faces, once filled with excitement at the prospect of going to Europe and fighting for queen and country, yield only glassy, haunted expressions by film’s end. In a scene that made my eyes get misty, an exhausted soldier gently pets the head of a tiny dog; because the film has been brightened and denoised, every ripple of the dog’s fur is visible as the soldier runs his calloused fingers through its soft coat. It’s images like these that have stayed with me, making me want to relive the film in a theatrical setting for a second time.