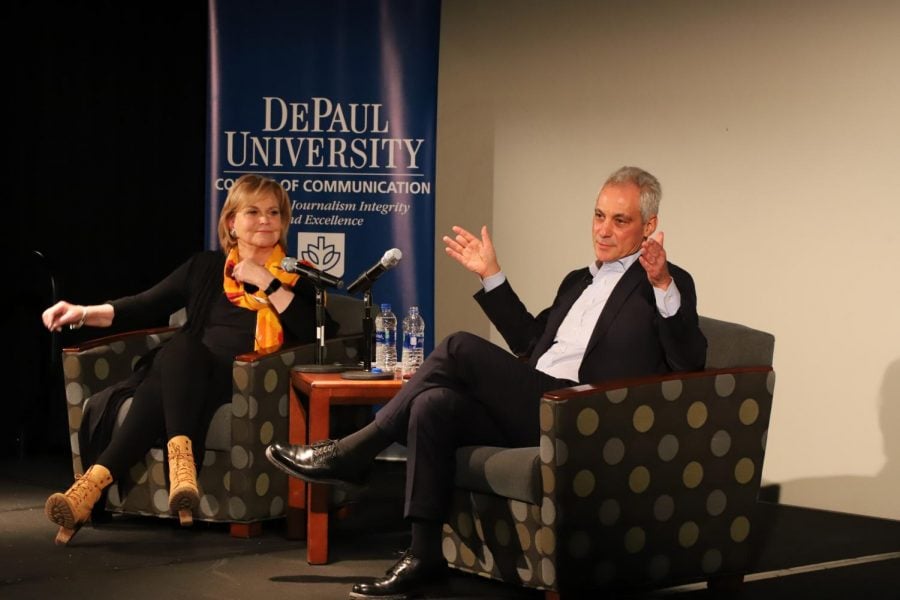 Mayor Rahm Emanuel joins journalism professor Carol Marin on Tuesday, Jan. 28 to speak to students about the relationship between journalists and public officials.

‘We never, ever punted a problem,’ Emanuel tells DePaul

The City of Chicago was battening down the hatches in preparation for record-freezing temperatures, but Mayor Rahm Emanuel wasn’t afraid to crack a joke.

“Is anybody cold?” he chuckled as he entered an event for journalism students at DePaul University.

With three months left as mayor, Emanuel joined on Tuesday morning for an interview with NBC’s Carol Marin at DePaul University’s Center for Journalism Integrity and Excellence. Quickly going into an off-the-record session, the mayor then taped a podcast segment with Marin before launching into a Q&A with student journalists.

Emanuel didn’t shy away from reflecting on what he hopes his mayoral legacy looks like.

“Look, in the end I was able to do two things,” he said. “One: we never, ever punted a problem. You may not like the solution, it may not have solved the problem, but I never kicked the can. We addressed it head-on, from day one.”

“Second is … when I walk out [as mayor], is that I hand off a city in a better condition.”

He brought up his controversial record on Chicago Public Schools, where in 2013 he closed 49 schools and cut budgets across the board, explaining that despite hardships, he was able to pull a bleeding education budget up into the current surplus.

“I think he gets a bad rap,” said DePaul junior Abbas Dahodwala. “I think the way people have portrayed him since he became mayor has been a bit too negative. There’s a lot of stuff he’s done that I don’t personally agree with, but you can tell from what he’s talking about up there that he cares.”

Perhaps the most affecting part of the event came at the close when Marin presented Emanuel with a gift from DePaul: framed photos from the NBC archive of a 16-year-old Emanuel protesting neo-Nazis marching on Skokie in 1977.

“Oh wow,” Emanuel said, seemingly surprised as Marin handed the frame to him. After pausing for a few moments to take in the gift, he told students, “it doesn’t matter if they’re in Skokie or not, their language of hate has to be confronted.”

“I didn’t expect that at all,” said Dahodwala. “It made me feel a little bit more for him. The [Skokie] picture was just so, so powerful.”

The mayor also gave some of his thoughts on what he felt was a sometimes too- adversarial relationship between politicians and the press. Asked by students about the tension for journalists on balancing different types of reporting, he said, “you have a job to do, which is to challenge. To ask questions. That is your role, and I would say it is … more important than ever before. But I would say, don’t allow yourself to question what the other person’s trying to do.”

The mayor steered away from a question on some current news related to DePaul when asked about the recent federal lawsuit concerning alleged election fraud announced by DePaul freshman and Aldermanic candidate David Krupa.

“If it’s in court, I’m not going to give you my thoughts on that,” Emanuel said. “But, let me say in general: you’ve got an election, go make your case to the voters.”

The whole event was meaningful for Mike Wzorek, a third-year communications and media studies major.

“Here, you get the chance to meet with him in a public setting, have an interaction with a person of power that’s sort of distant from you, inaccessible,” Wzorek said. “Now, he’s accessible.”

“That sort of gives the student a bit of power too, that breaks down a barrier between us and those in power,” he added

Getting to see the mayor in person was also worthwhile for Dahodwala.

“I was here for a class just to get extra credit, but now I don’t even care because that was really worth it,” Dahodwala said.

When time ran out, the mayor had to return to his regular duties. Later that day, the governor of Illinois issued a disaster proclamation for the dangerously cold weather centered in Chicago. Emanuel said earlier in the day that the forecast was “not to be taken lightly,” and could be life-threatening. There were bigger things to worry about as he stared down what would be a long few days, but as he left the DePaul event, the framed photos of a younger Emanuel stayed in his hand.