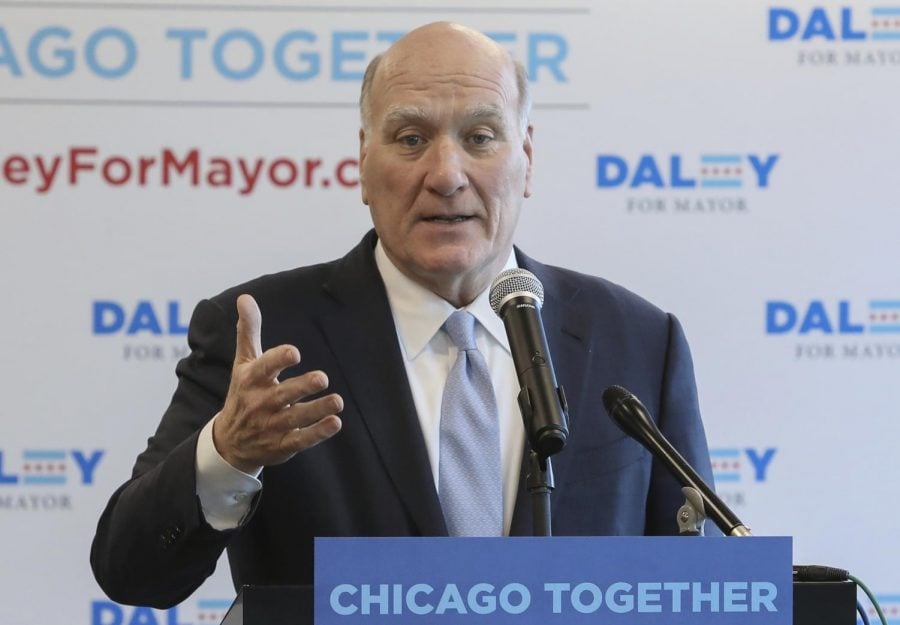 Bill Daley speaks during a news conference in Chicago on Feb. 8. Daley is aiming to follow in his father and brother’s footsteps by running for mayor.

Bill Daley aims to make his own mark with mayoral campaign

In the wake of Rahm Emanuel leaving office, Chicago’s mayoral race started off as a free-for-all. With so many candidates it’s hard to pinpoint who is who, who actually has a chance and what their candidacy will mean for the city.

One name in the race, however, is undoubtedly familiar to Chicagoans: Bill Daley.

Even to out-of-staters living in Chicago the Daley name resonates with the city’s past because of the legacies of former mayors Richard J. Daley and Richard M. Daley, father and brother, respectively to Bill Daley.

Daley’s campaign is different from his familial predecessors by focusing on fundraising, something he has been immensely successful at, allowing him to dominate the mayoral advertising. One of the most recent contributions to his campaign, and a controversial one at that, was from Ken Griffin, Illinois’ richest man. Griffin, who was a big backer of Republican Bruce Rauner’s failed 2018 governor’s race, gave the Daley campaign $1 million.

Larry Bennett, a political science professor at DePaul, said that the fundraising by this Daley differs from his father’s campaign.

“When Richard J. Daley dominated Chicago politics in the 1950s and 1960s his campaigns for mayor were driven by the Democratic Party ward organizations across the city,” he said.

Despite this difference, however, Bennett said that similarly to “his brother Richard M., Bill Daley also presents himself as a unifying figure,” with a focus on being “an ‘ideas’ candidate…proposing to shrink the city council, increase municipal revenues, and the like.”

Mitzi Ramos, a professor of Chicago government and politics at DePaul described what a candidate needs to become a frontrunner.

She went on to say that the Daley legacy may not be beneficial to this race.

“After 40 plus years of Daleys in control, many Chicagoans are not even looking at Bill Daley as a viable candidate because they do not want a repeat of history,” Ramos said.

Whether or not Daley will have the same success as family members are still unclear in a race where there are yet to be any truly-defined frontrunners.

“Can Bill Daley convince voters that he is ‘his own man’?” Bennett said. “If the overwhelming majority of voters view him as ‘just another Daley,’ then I think his chances of making the run-off are much reduced.”

For students and young voters however, the name recognition does not necessarily coincide with negative connotations. Sebastian Clark, a transfer student at DePaul University, said that Daley was the only name he recognized in the race.

“Just from listening to people talk about politics in Chicago, the name itself seems big enough to make people vote for him,” he said. “I know just about everyone hated Rahm [Emanuel] so at this point anyone that takes his place should make Chicagoans happy.”

With the campaign slogan of “no more excuses,” Daley is adamant on his political positions and proposed changes in policy. Some of his top proposals include introducing $50 million to go toward violence prevention and searching for ways to increase revenue in order to make it through the likely future pension crisis. According to the Chicago Tribune, Daley said that in regards to increasing revenue “anything is on the table,” whether that be “marijuana, casinos, commuter taxes, real estate transfer taxes.”

In addition to the $50 million, Daley has released a three-part plan to reduce crime in Chicago. The three parts are “enforcing and strengthening gun laws, investing in police and developing a coordinated gang strategy and violence reduction” according to the plan released on his website.

Daley also plans to propose legislation that combines the force of Chicago Public Schools and City Colleges. For children and students growing up in the city, this plan promises to offer them a chance to attend community colleges for no cost.

“It just seems to me that with the new world we’re in, that we ought to look at this as really K-14,” Daley told Chalkbeat Chicago. “Many jobs today, all you need is maybe two years of college.”

As of publication, Daley has been endorsed by the Chicago Tribune and  Crain’s Chicago Business.