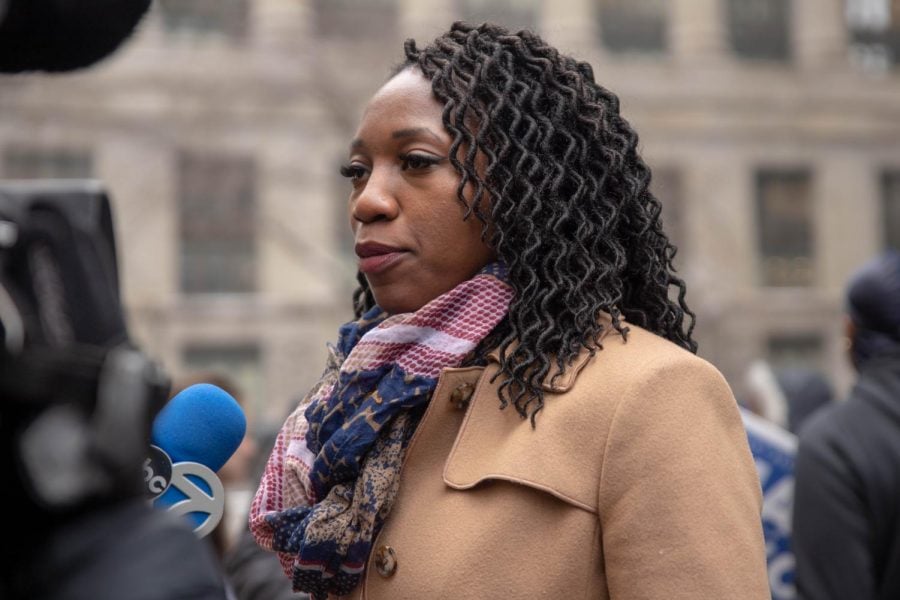 Mayoral candidate Amara Enyia speaks with students at her “Party to the Polls” on Feb. 11. Chance the Rapper was scheduled to come but could not make it last minute, according to Enyia.

Amara Enyia delivers a walk to the polls, but no Chance the Rapper

Chicago mayoral candidate Amara Enyia kicked off early voting with a brief, sparsely- attended rally at the Daley Center Monday, Feb. 11, culminating in a chilly, three-block march to the polls and an empty promise.

For weeks, flyers circulated online and on college campuses advertising a “Party to the Polls” tour with the candidate and Chance the Rapper, who cut a $400,000 check to Enyia’s campaign last month. When Enyia arrived more than 30 minutes after the rally’s scheduled 11 a.m. start time, Chicago’s favorite rapper was nowhere to be seen.

While speaking to media outside the Daley Center on Monday, Enyia said she knew Chance would not be in attendance because of a “late night” at an event Sunday evening. Other campaign staffers noted that Chance lives a busy life, which can make scheduling difficult.

“People aren’t there for the celebrities,” Enyia’s deputy policy director and senior  political science student at the University of Chicago Richard Omoniyi-Shoyloola said. “They are there for the ideas.”

He said Chance has put his money where his mouth is and now is the time to refocus the campaign’s energy on the candidate.

Money aside, Chance’s endorsement has improved the visibility of Enyia’s campaign, particularly among the young voters who Eniya will need to rely on in order to become the next mayor of Chicago. Enyia said the “Party to the Polls” tour advertising the Grammy Award winners appearance is a key part of her campaign strategy to draw college students to the polls — and she’s optimistic that could happen.

“We’ve had a lot of people tell us they have never been involved in Chicago politics until now, because this is the campaign that really attracted them,” Enyia said. “We know that millenials voted in record numbers in the midterm election, and that they have clearly expressed that this is a key election for them and that they care about the issues. So we are simply translating that energy into getting people to come out to the polls.”

November’s midterm elections did see record midterm turnout among young voters with 18-29 year olds casting 3.3 million early votes, up more than 180 percent from the 2014 midterms, according to the political data analysis firm TargetSmart. Still, that demographic remains America’s most apathetic block of potential voters, logging the worst turnout of any age group in every national election since the U.S. Census Bureau began tracking voter-age almost 50 years ago.

Omoniyi-Shoyoola said record turnout in midterms is especially exciting because even without a presidential ticket on the ballot, youth voters sent a clear message that they are willing to engage the political process. He says the campaign’s goal is to cultivate and embolden that fervor.

In local elections, turnout trends even lower across demographic boundaries, and the age disparity can be even more pronounced. A 2016 study from the University of Portland of mayoral elections in 50 U.S cities showed Chicago voters over the age of 65 have seven times more electoral clout than those under the age 35.

“It’s no secret that people my age tend to be very disaffected and not very willing to get up and get engaged with politics,” Omoniyi-Shoyoola said. “That downtown rally showed the fact that [Enyia] has been able to reach out to so many young people, help them feel like they can be part of the political process, feel like their voices can be heard and feel that way to such an extent that they are willing to show up on a cold day downtown when all of us have classes and exams to prepare for, so I thought that was very encouraging.”

While the Enyia campaign may be targeting the youth vote, it is yet to be seen if young voters are targeting her. Monday’s rally drew a small crowd of about 40 people — mostly students shuttled to the Daley Center plaza in buses the Enyia campaign provided, which picked up students at various college campuses around the city — and even fewer continued down the street to a nearby polling place.

The bus shuttling DePaul students from the corner of Jackson and State arrived more than 20 minutes after the scheduled 10 a.m. pick up time.

In a Telemundo Chicago/NBC 5 poll published Feb. 14, Enyia sits in sixth place among the 14 candidates at seven percent. In front of her are Gary Chico at nine percent, Lori Lightfoot at 10 percent, Susana Mendoza at 12 percent, Bill Daley at 13 percent, and front runner Toni Preckwinkle at 14 percent, with undecideds polling at 19 percent.

“How you poll matters,” Omoniyi-Shoyoola said. “If you send out polls through a medium that is disproportionately going to be responded to by people who are older, of a certain demographic or certain parts of the city, that’s going to skew the poll in their favor and whichever candidates reflect their interest. But that doesn’t mean that [the poll] is representative of the whole city.”

Surveying young voters accurately can be a struggle; young people are less likely to own a landline, which is a traditional means of polling public opinion, but much like polls, the demographics of voters in local elections also skews toward older people. The University of Portland’s 2016 study showed that while the average age of eligible voters was 41, the average voter was 54 years old.

Over the last two weeks, Enyia has run through a gauntlet of bad press. The Chicago Tribune reported Feb. 14 that Enyia failed to pay a former campaign spokeswoman $24,000 for four months of work. The revelation came just a week after the Tribune released an investigation saying Enyia did not report a third of her income, including $21,000 for her work on Chris Kennedy’s gubernatorial campaign. She says she simply forgot to giver her accountant the tax forms.