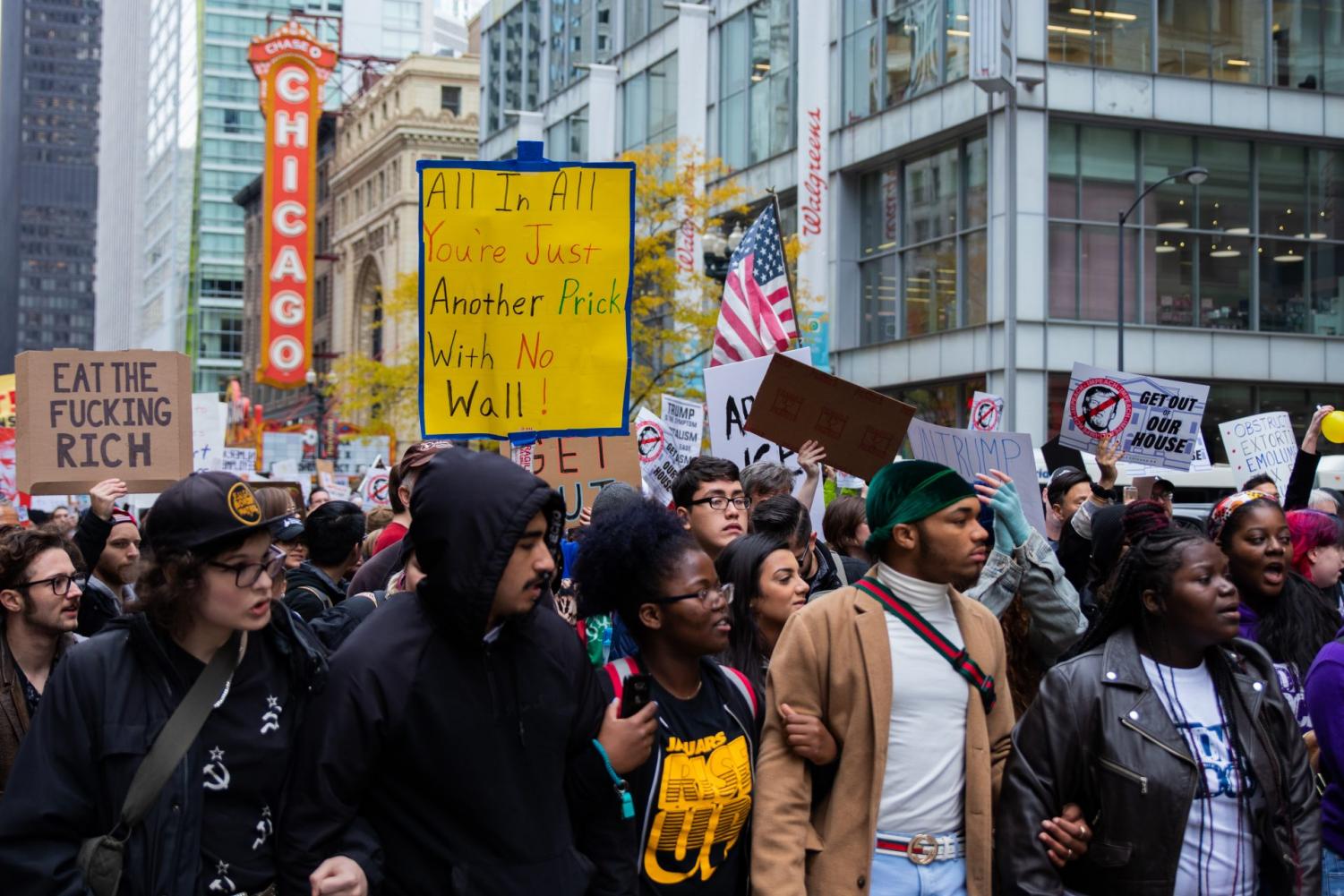 President Donald Trump came to Chicago on Monday for the first time since he became president. As he called the city an “embarrassment to the country” during this speech at the annual gathering of the International Association of Chiefs of Police at McCormick Place, thousands protested his visit in the Loop.

Chanting, drumming, whistling and signs filled the area in front of Trump Tower along the Chicago River and later spread to State Street and Michigan Avenue.

“All over the world they’re talking about Chicago,” he said. “Afghanistan is a safe place by comparison. It’s true.”

But protestors had words for Trump, too.

Among those in the crowd was John Nordmark, from Joliet. Nordmark was holding up an American flag that was upside down, which means an emergency or problem. He feels the country is in an emergency as long as Donald Trump is president.

“I don’t like Donald Trump and I think he is bad for our country,” Nordmark said.

After he spoke at McCormick Place, Trump attended a big-dollar fundraising luncheon at his hotel, Trump Tower, on Michigan Avenue. On the streets outside, chanting, drumming, whistling and signs filled the area.

The peaceful protest of thousands began around 11 a.m. and ended up marching through downtown Chicago, ending back in front of Trump Tower, where protesters chalked up the streets with phrases like, “Lock up Trump.”

During his visit, Trump signed an executive order establishing a new Commission on Law Enforcement and an Administration of Justice. The commission will study issues facing law enforcement, such as substance abuse, homelessness and mental illness, according to a White House briefing.

It will also look at best practices for recruiting, training and supporting law enforcement officers and will report back on recommendations within one year.

Trump blasted Chicago Police Superintendent Eddie Johnson during his speech, who boycotted the event due to differences in values.

“There’s one person that’s not here today,” Trump said. “Where is he? I want to talk to him. In fact, more than anyone else this person should be here, because maybe he could learn something.”

Trump accused Johnson of “not doing his job” and called Chicago “the worst sanctuary city in America” because of the city’s reluctance to work with U.S. Immigration and Customs Enforcement personnel.

“It’s no surprise that @realDonaldTrump brought his insulting, ignorant buffoonery to Chicago,” she tweeted in response to Trump’s speech. “Luckily, in this city, we know the truth and we will not let anyone – no matter how high in office – denigrate who we are as a people or our status as a welcoming city.”

Outside, a group of high school students from Sarah E. Goode STEM Academy started chanting, “Hey hey, ho ho, Donald Trump has got to go.” Soon after, a large section of the protest followed suit, shouting the same phrase.

One woman from Sarah E. Goode was Miracle Boyd, 18, a senior. During the protest, Boyd was one of many students always at the very front, taking every step and turn downtown. 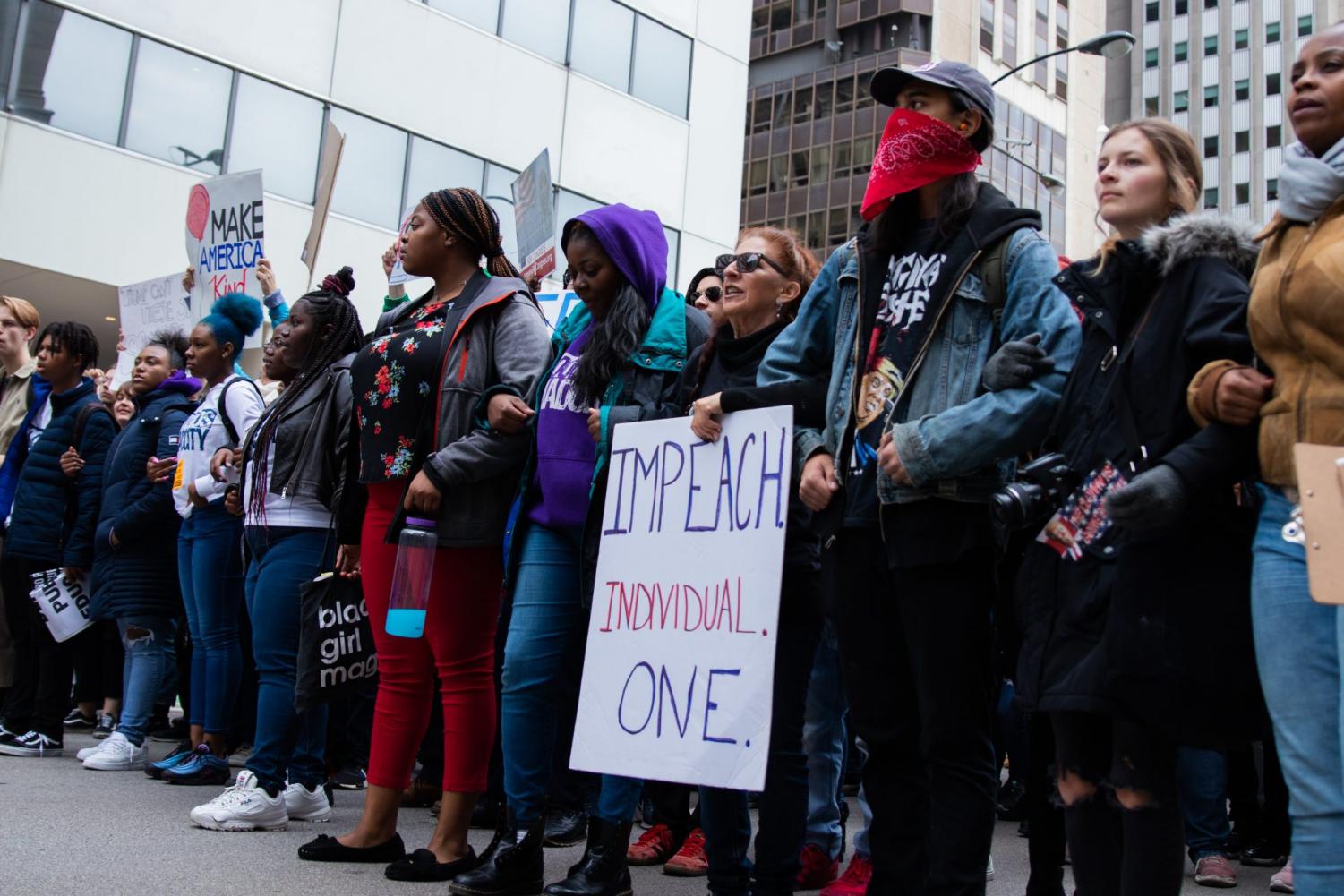 Others protested against everything Trump has done so far during his presidency.

“I hope Donald Trump hears us say, ‘We are so done with him,” protestor Amy Parker said. “He’s terrible for the country, he’s terrible for the world, he’s dangerous, he foments hate. He’s done terrible things internationally, he’s done awful things on the border to people who are trying to get here and save their lives. I hate him.”

A strong police presence followed the group as it made its way down North Wabash Avenue, State Street, Jackson Boulevard and Michigan Avenue.

“Right now we’ve got the most dangerous president in American history,” protestor Vance Martinez said. “Right now he’s here trying to collect money from his rich donors and, you know, we’re not going to go for that here in this city.”

Supporters of the protesters filled the sidewalks, cheering, waving and encouraging those marching. Whether it was tourists – river tours were still running – people on break or even those merely moving their car, many stayed to watch.

Even though the majority of those in the crowd didn’t support Trump, some of his supporters came out with their signs and, of course, MAGA hats. One supporter, Joe Loris, was attacked by a non-supporter for wearing his hat and an American flag as a cape, but stayed long after to continue supporting President Trump.

Rio Chazez, 39, has lived in Chicago for the past 20 years. He was one of a few using a megaphone to direct, inspire and cheer on his fellow protesters. Chazez walked in the very front and said Chicago would not stay silent.

“Like most protest, I just want us to at least be heard a little bit, you know?” Chazez said. “I don’t think it’s going to change anybody’s mind. I think it’s just going to bring more light to the fact that he’s unpopular and we don’t like him. That’s what this is; we aren’t going to change any Trump supporter’s minds, they’re not going to be like, ‘Oh yeah, this guy’s an a**hole,’ no.”

Those who marched through downtown made it clear what their purpose was. 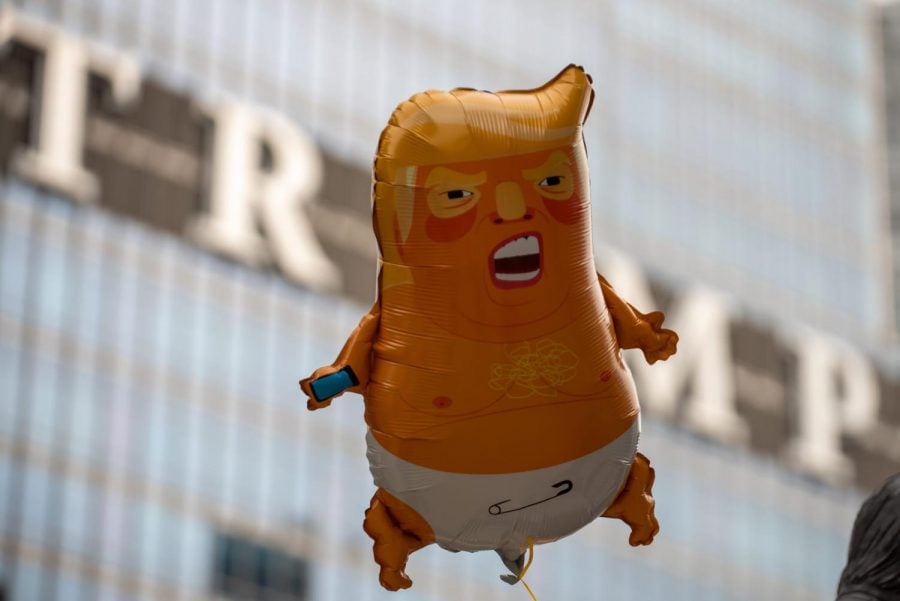