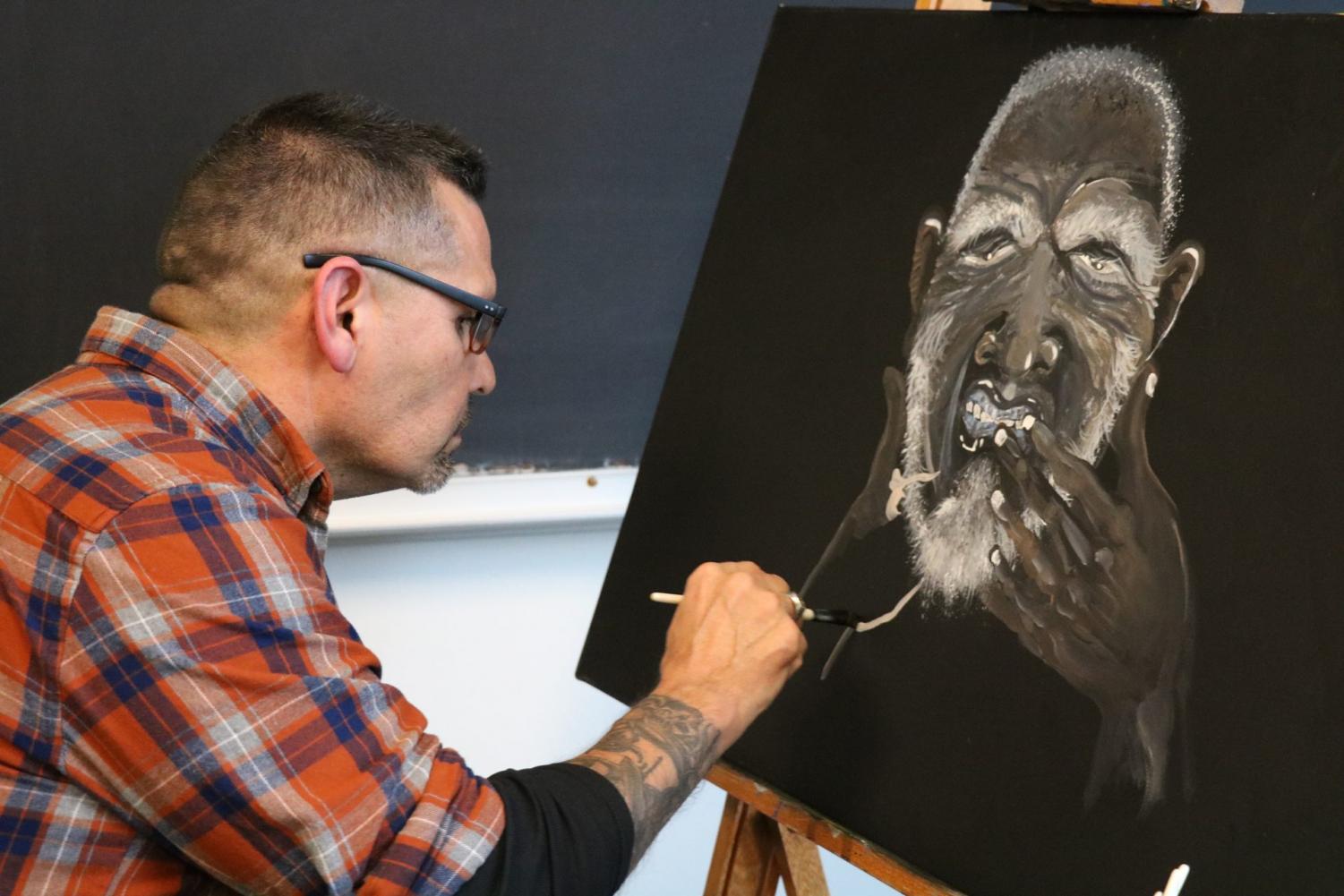 Michael Slaughter, a veteran and DePaul alumnus, uses art to draw attention to the city’s homeless population. “Chicago is asleep,” he said. (Bianca Cseke / The DePaulia)

Michael Slaughter, a veteran and DePaul alumnus, uses art to draw attention to the city’s homeless population. “Chicago is asleep,” he said.

Michael Slaughter wanted what he says all veterans are after: a chance to be part of something that matters after they return to civilian life.

Among the issues veterans often face are finding employment, mental illness and homelessness, the latter of which is often a result of other challenges snowballing.

Slaughter, who studied human resources at DePaul, said that when he came back to civilian life, employers had a hard time understanding how the skills he gained in the military would transfer over to the jobs they were looking to fill. He also emphasized the number of veterans who commit suicide on an average day – 21, according to the U.S. Department of Veterans Affairs – and how little effort politicians and other government officials have made to find true solutions.

“Chicago is asleep,” he said. “It’s not interested in embracing this [problem].”

The lack of effort makes him angry; even with the current mayoral race in Chicago, candidates have said little, if anything, about their plans for solving veteran issues.

That’s part of the reason he’s taken the initiative represent these problems in his own work.

On average, about 21 veterans commit suicide each day nationally because of troubles reintegrating.

Slaughter’s background gave him the perfect opportunity to combine his experiences in the military and the need to bring attention to veteran issues with his love for art and painting in particular.

Slaughter has several artists in his family and he himself has been drawing since kindergarten, but became interested in painting in his teens, calling it a “comfortable medium,” and continued working on improving his skills until he joined the military after 9/11.

“My friends when I was a little boy would find my house because there would be artwork on my trash cans,” Slaughter said.

Though he has used different mediums, painting sticks out because of the speed and ease with which he can create his pieces with this particular medium.

“Painting is pretty easy when it comes to acrylic,” he said, referring to the type of paint he most often uses. “It’s an easy outlet and a quick process.”

The paintings span the range of issues veterans face.

One, which he’s titled “Thank You for Your Service” after a common, but ultimately useless, phrase civilians and politicians say to veterans, features a man he calls Sarge. Its background is painted in an impressionistic style, which causes the scene to be blurry. Slaughter said this is done with the intention of showing how the city tries to blur out its uglier side by not bringing enough attention to problems it hasn’t done a good job of addressing.

Another of his paintings shows a veteran sitting outdoors in the rain, still wearing the brown boots he was given when he joined the military after the terrorist attacks on the U.S. on September 11, 2001.

“An Unfinished Life” is one of the few paintings Slaughter has created using oil on canvas, rather than acrylic paint. The veteran in this piece leans against a brick wall that is typical of Chicago. However, the man finds that he has nothing to lean on, signifying the fact that he does not have a support system to rely on when he comes up against challenges as a civilian, Slaughter said.

Finally, the piece Slaughter is currently working on, which he plans to title “Did Not Reintegrate, Do Not Resuscitate,” is meant to represent an African-American veteran struggling with depression and other mental illnesses as a result of the traumatic experiences he went through while fighting for the U.S. in the military.

Slaughter hopes that these works will bring enough attention to these issues that they might start the process of changing how Chicago deals with them, he said.

“Veterans want to be part of something that matters,” he said.

He added that they want to continue serving the community even after returning from their respective branches of the military, but struggle with things such as a changed vernacular among individuals, including rhetoric and hate.

“We’re used to things that function well,” he said. “In the military, it’s about the mission, not about rhetoric and hate. We want to be part of the solution, but we do not connect well with disfunction.”