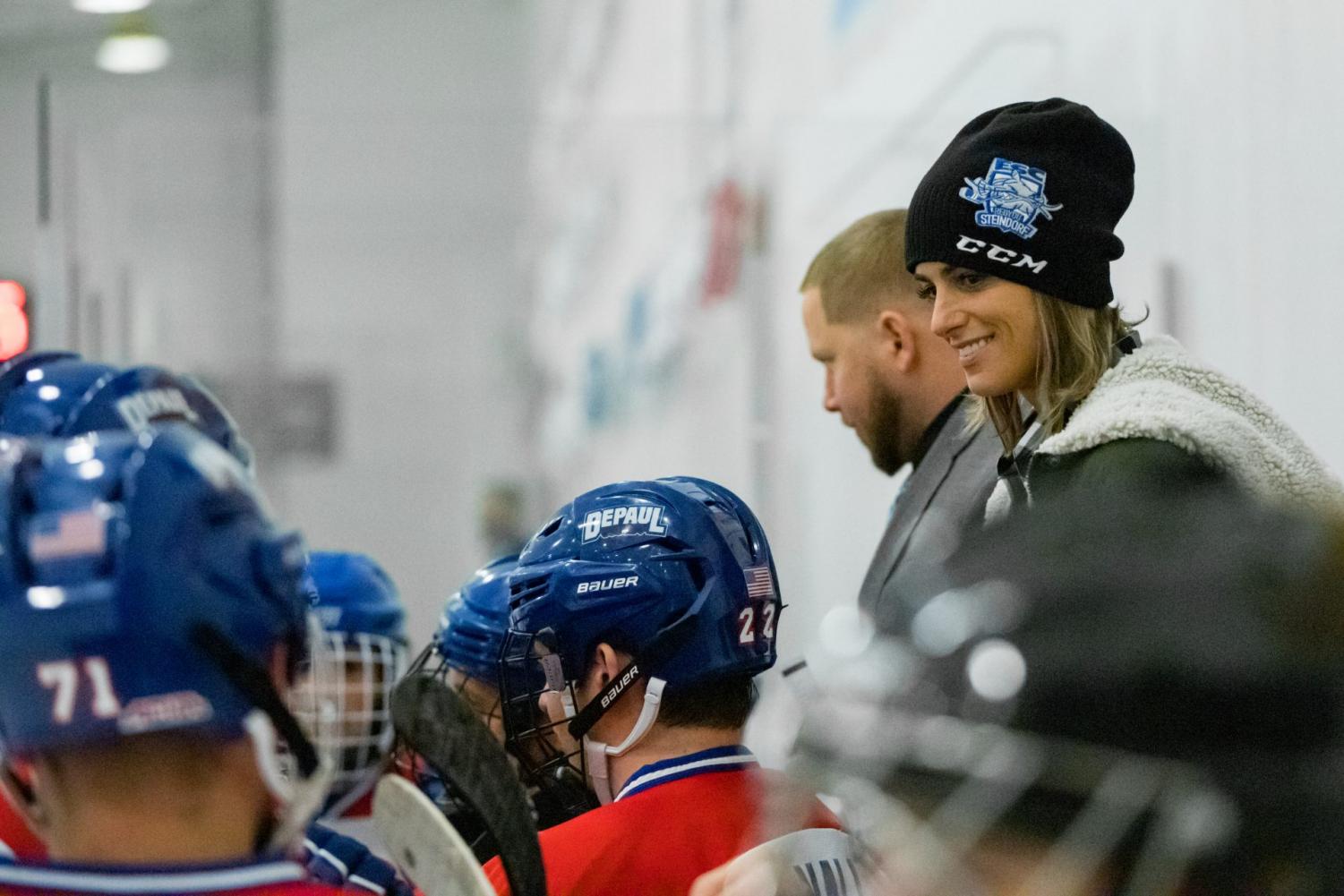 It doesn’t take a genius to notice when a team has a different face behind the bench, especially when that person holds a front office position. But for one coach, she’s had an enormous impact on a team at a school that isn’t a member of the same league or division from the rest – in less than six months.

Carla Pentimone, the current assistant coach for DePaul University’s club hockey team, is making big strides at the rink and throughout the City of Chicago.

Graduating in 2011 from the University of Wisconsin-Madison with a degree in communications and media studies, she played Division 1 hockey for the Badgers, winning two NCAA national championships during the 2008-09 and 2010-11 seasons. She then went on to get her master’s degree from Northwestern University in business/corporate communications, while working at the Chicago Tribune as an advertising coordinator.

“When I was 13, I was begging my parents to play hockey when my brother was playing, so I started pretty late but fell in love with the sport after that,” she said.

Pentimone’s experience and attitude in the hockey world is unmatched, as her impressive résumé includes a multitude of coaching and recruiting jobs around Illinois. Along with DePaul, she’s currently a head recruiting coach and scout for Next College Student Athlete (NCSA), the hockey director for the Admirals Hockey Club in Glen Ellyn, Ill, an associate head coach at Robert Morris University, an assistant coach for the Chicago Jets Girls Hockey Club and a volunteer coach for the Chicago Blackhawks Blind Hockey program. 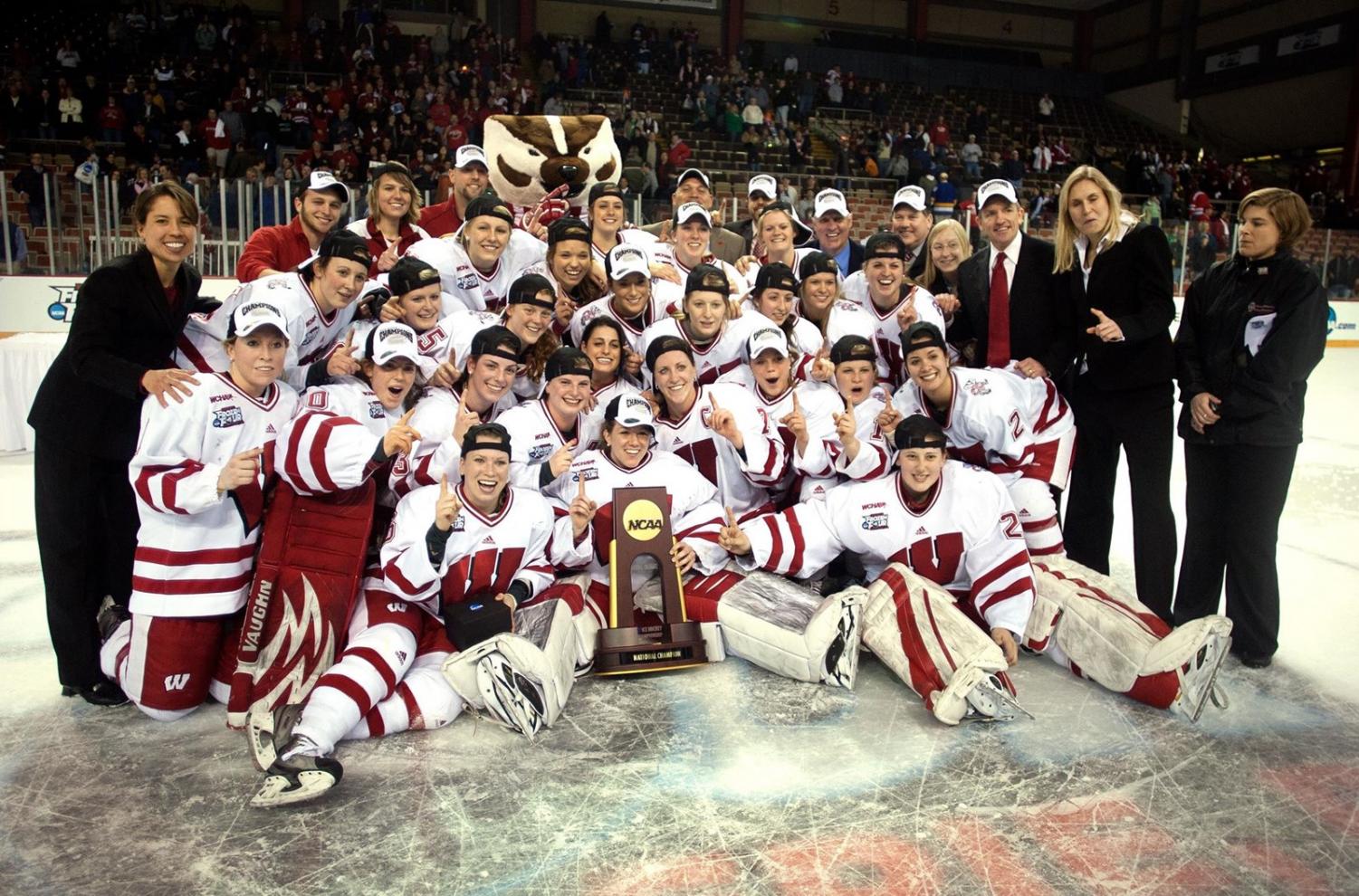 “I started with that about five years ago – there’s a puck with a noisemaker on the inside of it so that the players are able to track it from A to B while we teach them stride count,” she said about the blind hockey program. “They love battling, they love contact sports and it’s great for the athletes to see how far they’ve come.”

While at Wisconsin, Pentimone played alongside some of the biggest names in women’s hockey such as Hilary Knight, Meghan Duggan, Brianna Decker and Alex Rigsby. All four of them were members of the 2018 U.S. Women’s Olympic Team that won the gold medal against Canada in Pyeongchang.

“I was just at Alex Rigsby’s wedding,” she said. “Over the summer, we had her bachelorette party. They’re still all my girls.”

It’s no secret that her love for the game is immense, much like the players she skates alongside with. During the offseason, head coach Danny Randall for DePaul made it a mission to find an assistant coach to help the team not only on the ice, but further down the line for years to come.

“I’ve always admired her drive for the game and her dedication to the sport,” Randall said. “She’s already a kind of trailblazer in the game as far as for women in hockey, so I thought she would be an asset when I was looking to build the coaching core from scratch.”

Compared to the rest of the university, DePaul’s hockey team is considered a club, as it is not a member of the Big East Conference nor an NCAA Division 1 team. Instead, it is a member of the Northern Collegiate Hockey League (NCHL) and plays in the American Collegiate Hockey Association (ACHA) Division 2 with teams throughout Illinois and Wisconsin. 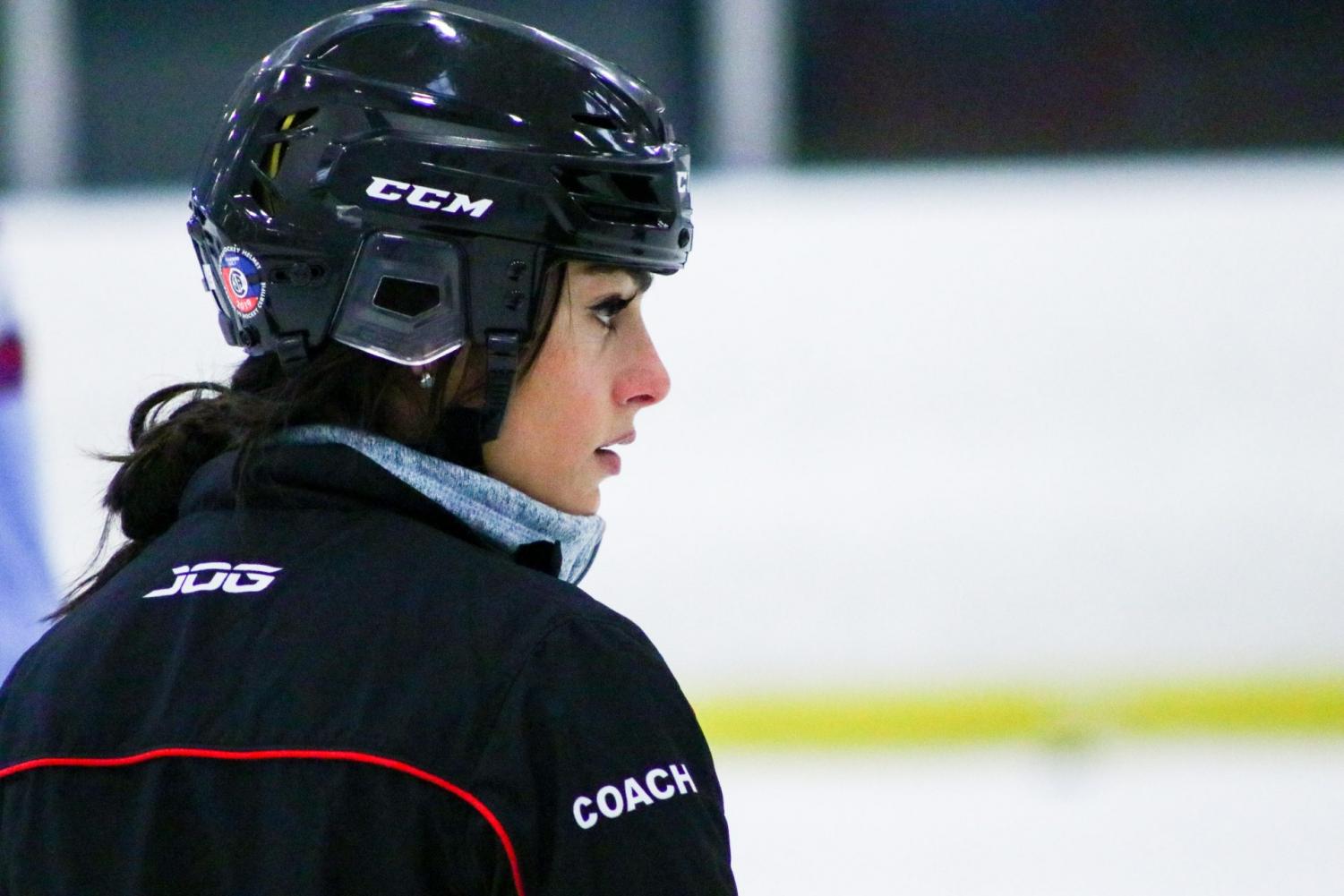 Assistant Coach Carla Pentimone looks down the ice during a practice for DePaul University’s hockey team on Tuesday, Nov. 12, 2019. Ryan Gilroy / The DePaulia

This, like for many other hockey teams throughout the Midwest, immediately puts them at a disadvantage as they do not receive any funding or exposure from their school or athletic communications department, because they are not members of their schools’ affiliated program. Instead, the team’s image, finances and logistics are relied on the players and coaches themselves.

“It was a huge point for Danny – he wanted to hire somebody as a coach and a recruiting coordinator, so he recommended her and it was pretty quick,” said senior forward Ryan Hasty. “I talked to her once and immediately knew this is the person that we need.” 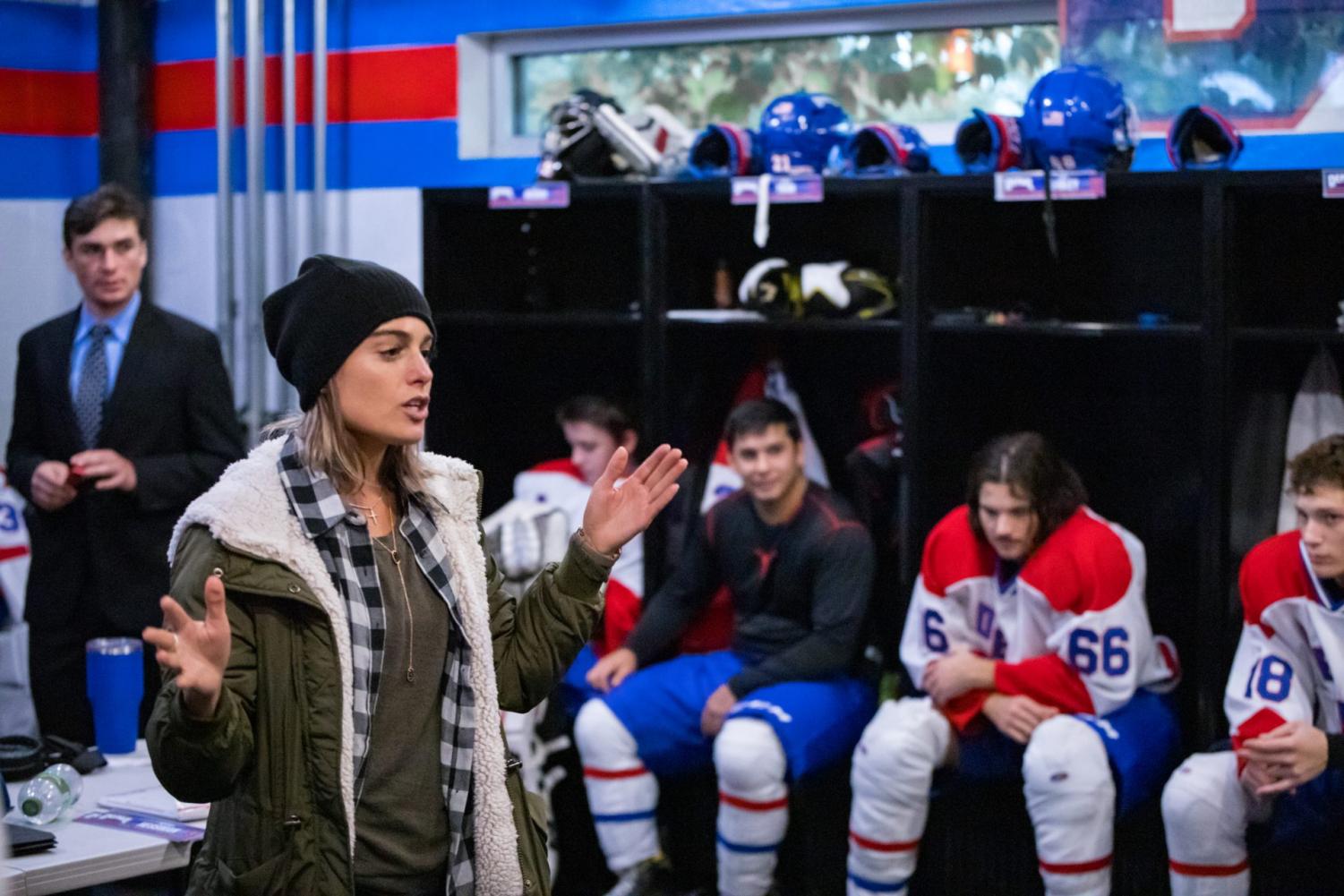 Hiring Pentimone has greatly paid off for the team, as they are now focused more on the future than the past.

On top of the challenge that comes along with a college club hockey team, recruiting can be a hefty task for club teams as well. Pentimone’s experience with NCSA has given the Blue Demons an enormous advantage with recruiting, bringing in players from all over the country.

“I would say, compared to last season, we had maybe three [recruits] all year and we’ve had 15 so far and we’re not even halfway through the season yet,” Hasty said. “We’ve had recruits at probably half of our practices so far this season.”

While impactful in her short time with the team, at first, Pentimone was unsure whether to join the team with her busy schedule. Eventually, she realized the potential impact she could have to build a culture that the team has rarely seen in its history.

Between Randall and Hasty during the summer, the process didn’t take long to reach out to Pentimone but took some convincing to get her to join. Randall initially reached out to her on social media as they knew each other from coaching similar players from different teams. 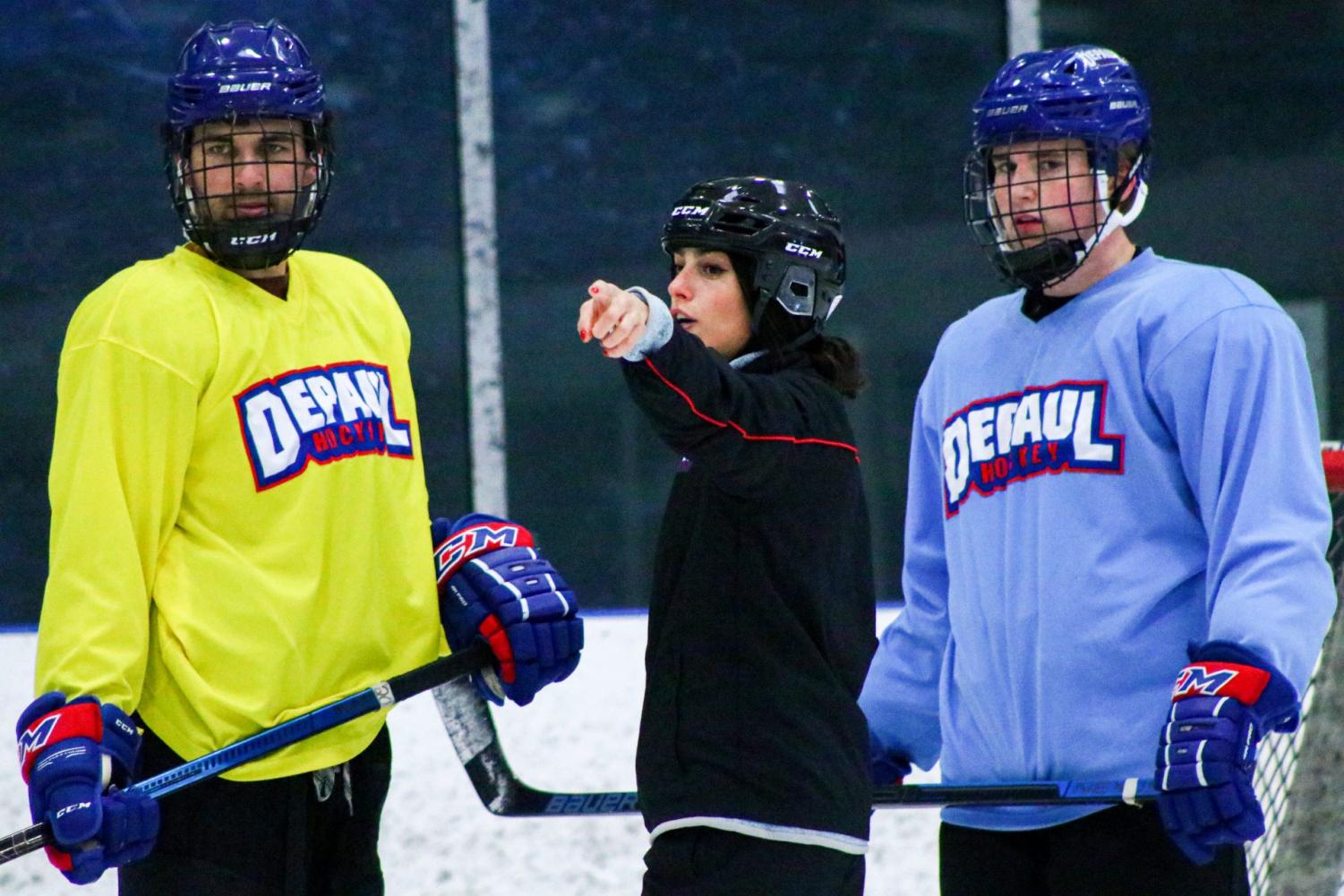 “I got a message from coach Danny asking about another coaching opportunity,” she said. “At first, I was going to say no without even hearing the opportunity but something inside me told me I needed to give them a call. I’m so fortunate that he believed in me to come out here.”

The risk paid off for the team as her attitude, drive and work ethic has propelled DePaul into a new and unfamiliar territory during the second full month of their current five-month season.