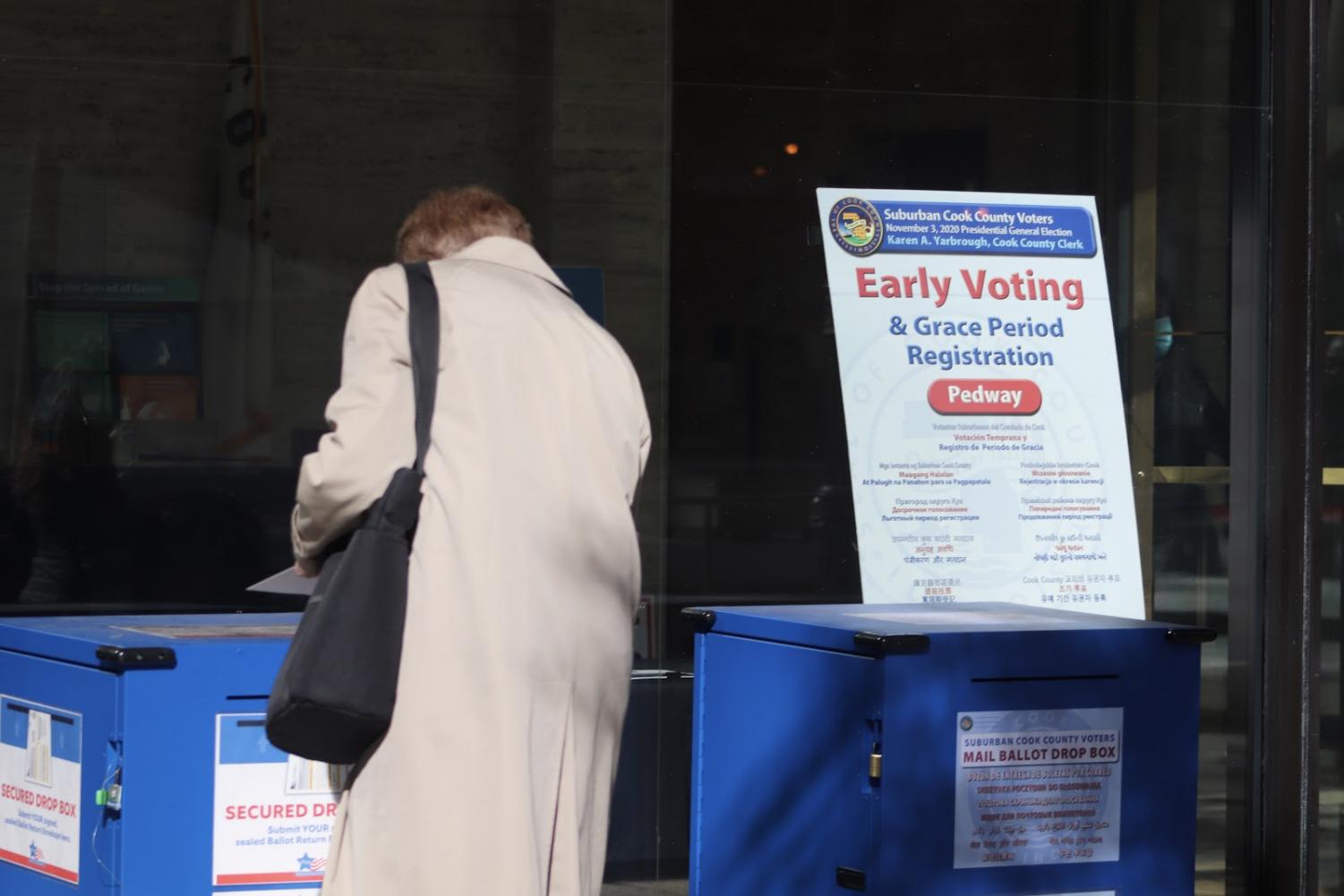 150 voters: DePaul professors work to register community ahead of election

In its first active year, DePaul Votes — a voter registration program led by professors Marie Donovan and Nina Diamond — has successfully guided over 150 students in registering to vote or requesting mail-in ballots.

The professors’ goal is to raise voter registration statistics among college students. Millenials and some of Generation Z comprise 37 percent of eligible voters, according to Brookings Institution.

“In this really important election year, we know that every DePaul student will want to vote,” said professor Nina Diamond. “But we want to make sure that they have what they need to actually cast that ballot. If we can remove obstacles to DePaul students registering to vote and requesting a mail-in ballot, then that’s what we need to do, whatever it takes.”

DePaul Votes trained five students to become Voter Registration Geniuses (VRGs) to personally assist students in the registerating or requesting process. The VRGs were trained to help students register and request mail-in ballots in any state.

One of the VRGs, junior Eddie Olewinski, said he joined the program to encourage his peers to vote.

“I wished to participate in this program to encourage fellow DePaul classmates to exercise their right, as an American citizen, to vote, ” Olewinski said. “Not voting is giving up your voice.”

DePaul Votes has dropped into undergraduate classes via Zoom to talk with the class about voting.

“We’re here to help you get registered and get a mail in the ballot, no matter what state you’re from, we have a genius who’s going to be an expert, and we’ll be able to find out the answers for you,” said professor Marie Donovan.

VRGs get back to students within 48 hours once they fill out the Google form on what the student needs help with.

Diamond compared the disparity of voting rates between all college students and students who are registered. She said 45 to 48 percent of students cast ballots in general elections because of such disparities but added the proportion increases to 70 percent when successful registration occurs.

Sophomore Nathan Richey said he believes the program has helped DePaul’s freshman class in their first voting experience the most thus far.

“I have helped around twenty incoming freshmen register to vote, which does not sound like a lot,” Richey said. “But I think having a positive first experience with voting can have a big impact on their likelihood to vote in the future. Facilitating this positive experience is how I think this program is impacting the DePaul community.”

Olewinski said his participation in the program has emphasized the barriers that voters experience — such as the laws implemented by 36 states that require voters to provide a form of identification to vote.

“This affects low-income voters, people of color, young people and individuals who have disabilities who may have trouble obtaining such information because of income, traveling distance or [being] intimidated by barriers,” Olewinski said. “It is astonishing to think you can vote using a gun license but not a student ID in Texas.”

DePaul Votes individualized approach will teach students how the process works for the rest of their lives.

“At DePaul, we care about the individual,” Donovan said. “I think that’s part of why the project resonated with so many faculty, staff, and students. Let me work with you, as you. It’s a very informative, and very scaffolded kind of process that ensures by the end of it, not only will the student be able to become a registered voter, but equally importantly, now understands all this is how you do this.”

DePaul Votes restructured their registration process in light of Covid-19 limiting in-person interaction. The original plan was to have booths and tablets with a VRG at each booth ready to help students.

“We had a plan, and it all went to hell because Covid-19 made a lot of the things that we had planned impossible,” Diamond said. “But we said ‘there’s another way to do this.’ We’re going to figure out what that way is and that’s how we ended up doing what we’re doing.”

Registering to vote may seem difficult, but DePaul Votes tries to reassure students that the process can be easy, Donovan said.

“Some people have said to us ‘I’m feeling you know, just so anxious right now’ is what one woman said to me, but having a [Voter Registration] Genius in her life made all the difference,” Donovan said. “It was so easy. She said ‘I feel so much better. I feel like I can do other things now.’ So it really is a very liberatory [sic] experience for some people.”

Voting can change students’ mindsets on how they influence our democracy, Diamond said. DePaul Votes wants to help students achieve that.

“We want students to come to think of themselves as voters, as people who can affect what happens in their democracy and take responsibility for it,” Diamond said. “When you become a voter, you see yourself as a voter or regular voter. You think of yourself differently and you think about the world of things you can influence differently.”