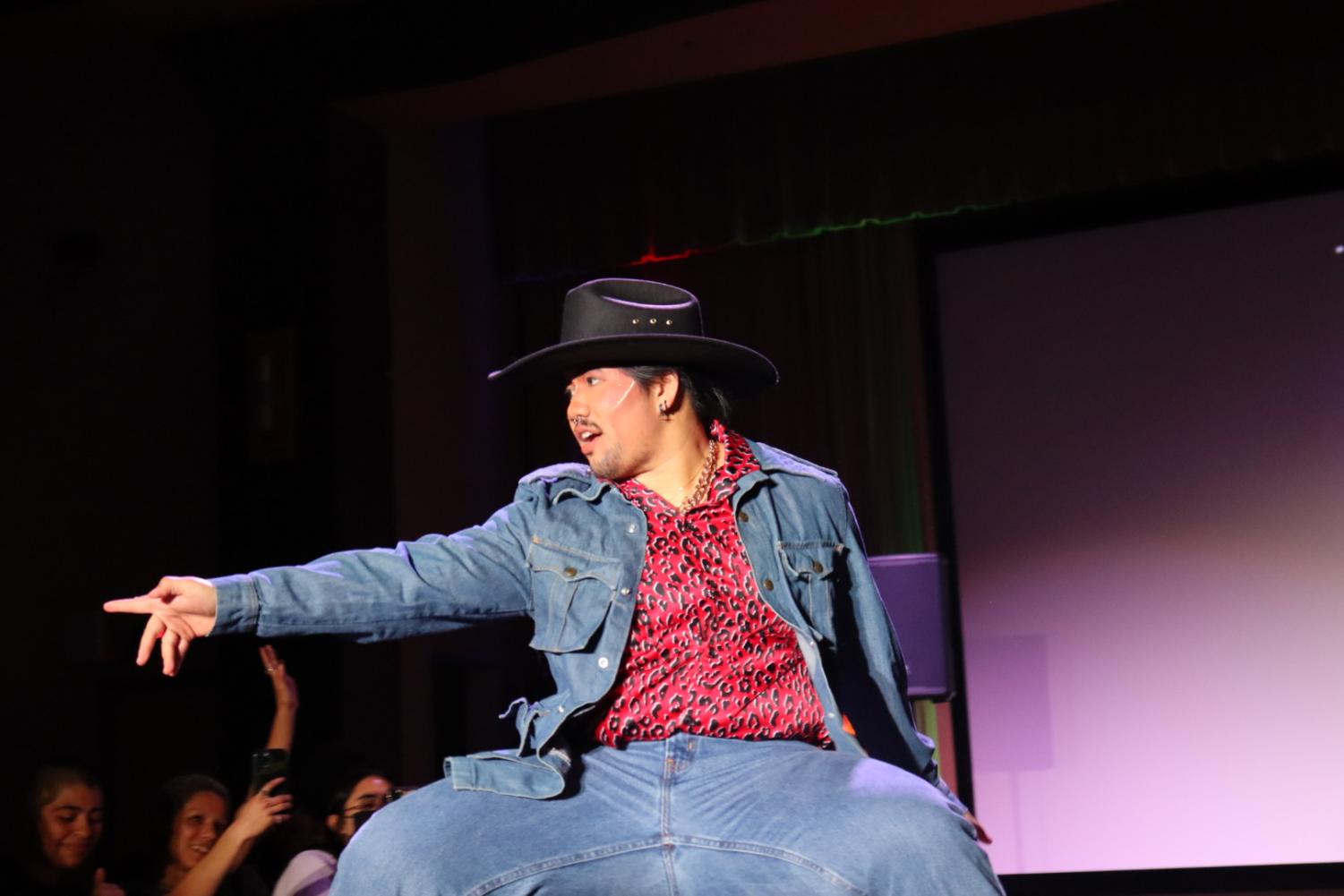 Adjusting the straps of their holster to align with the rest of the perfectly planned cowboy attire, Sydryl Denila, also known by the stage name Mr. Trans Former, is getting ready for their drag debut.

“Of course I am,” they said. “This is my first ever drag performance.”

Denila never imagined being a part of this community, but from helping friends out with their performances to now walking the stage themselves, Denila has made strides into the Chicago drag scene, performing as a senior at DePaul’s Drag Show on Friday.

“At first I didn’t think I would get into this, but I moved in with a bunch of my friends who do drag and became the ‘drag daddy’ making sure everyone was fed and had their lash glue,” Denila said. “Then I assisted for one of their performances and loved it, so I thought I would take a shot and try it as just me.”

Performing to “Save A Horse (Ride A Cowboy),” Mr. Trans Former amps up the crowd with their dance number. Denim shorts matched with a cut off red button-up and signature cowboy hat is the first costume for Mr. Trans Former tonight. Denila’s unmistakable drag look, including the high painted cheekbones, plenty of highlight and the trademark drag eye makeup complete the full effect.

DePaul hosted its first drag night after a two-year hiatus on May 12. It’s an 11-year tradition planned and coordinated by DePaul’s LGBTQIA+ Resource Center, Spectrum and QPOC, involving local professional drag artists and a competition between the DePaul drag students for a cash prize and chance to be DePaul’s 2022 Drag Superstar. Mr. Trans Former, along with six other students, are continuing the beloved tradition and maybe further on into the drag world.

Room 120AB in the Lincoln Park Student Center looks unrecognizable, decked out with a long runway, decorated tables with light-up balls, colorful strobe lights and a drink station with all the colors of the rainbow. With the DJ blasting club hits, the room once used for freshman orientation looks considerably like a nightclub in Northalsted.

The room is full of eager students, some new, some old that remember previous years’ drag shows, before Covid-19. Kelly Lang, a senior at DePaul majoring in peace, justice and conflict studies, has been looking forward to this since the 2020 DePaul drag show was canceled.

“I went my freshman year with a group of friends and absolutely loved it,” Lang said. “I’m so happy to be back now for my last year almost as a tribute to my ending.”

Walking back into the drag dressing room, the students are getting ready for their performances. The dressing room is covered in glitter; boas, wigs and detailed lace costumes are arranged in chaotic placements for each artist.

Carefully drawing in their sharp, angled eyebrows for a sultry look, DePaul senior Grace Gilbrattch, also known as Virgo Abode, rushes to get fully ready before the event begins. Gilbrattch is doing a tribute to Marina in the Diamonds in their set. As a costume design major, Gilbrattch used their personal skills and materials to create their own dress.

“I felt like [Marina] got me through some of my worst times, so I wanted to perform two of her songs,” Gilbrattch said. “The outfit was planned for when I saw her in person for her concert; I patterned the whole outfit, from the sparkly spandex to the top. I just wanted to be the shiniest thing out there.”

While it’s both Mr. Trans Former and Virgo Abode’s first time, Skater Gaytor, a DePaul senior, has been doing this for over a year.

“Oh honey, I can’t even count the amount of times I’ve performed, it comes so natural to me,” Gaytor said while simultaneously adjusting their wig and applying lipstick with perfect balance.

The show begins, the packed room is ready to start — a little late, as most gays are. The host of the night is popular local drag performer Irregular Girl. Before the event can fully start, the rules of drag have to be explained to the newbies, including a tip station to exchange for dollar bills to support the performers. Then it begins — Irregular Girl takes the stage, strutting down the runway with power on their sparkly sequin bodysuit and cotton candy cover.

“Please give a warm welcome to Bescoliná!” Irregular Girl announced.

“Dreaming of you” by Selena blasts through the speakers as Jose Dominguez Magdalene, the first student performer, walks out, all dolled up in a dress and handbag, and delivers a chilling acting performance of confessing love with an elated twist of alcohol. One by one, each student came onto the stage; Bescoliná, Mr. Trans Former, Testostermoan, Virgo Abode, Georgia Rising, Whorechata and Skater Gaytor each had the chance to wow the crowd with their routines. Along with the students, professional drag artists performed their sets as well. Stephanie Gato-Girl, Siichele and ​​Lúc Ami all came for guest performances.

The time came for the first round of votes. Along with the judges, the students in the crowd got to vote on three finalists to continue for a second performance. After much anticipation, Mr. Trans Former, Georgia Rising and Skater Gaytor advanced to the final round. Tension was high. Mr. Trans Former went first, and the memorable first few notes of “Treasure” by Bruno Mars sang through the room as the crowd cheered. Georgia Rising followed up with a high-energy performance in a tennis skirt and pigtails. Skater Gaytor performed to “You Oughta Know ” by Alanis Morissette in a bloody schoolgirl outfit, taking the crowd by surprise as they threw their wig off and expressed raw emotion of performative anguish.

The room goes silent as the giant screen tallies the votes for each performance. Holding hands, the three finalists hold their breath as the numbers rise. Scoring the highest at 82 votes, Georgia Rising won.

After taking their victory lap on stage, Georgia Rising takes a final bow for the crowd as DePaul’s 2022 Drag Superstar.