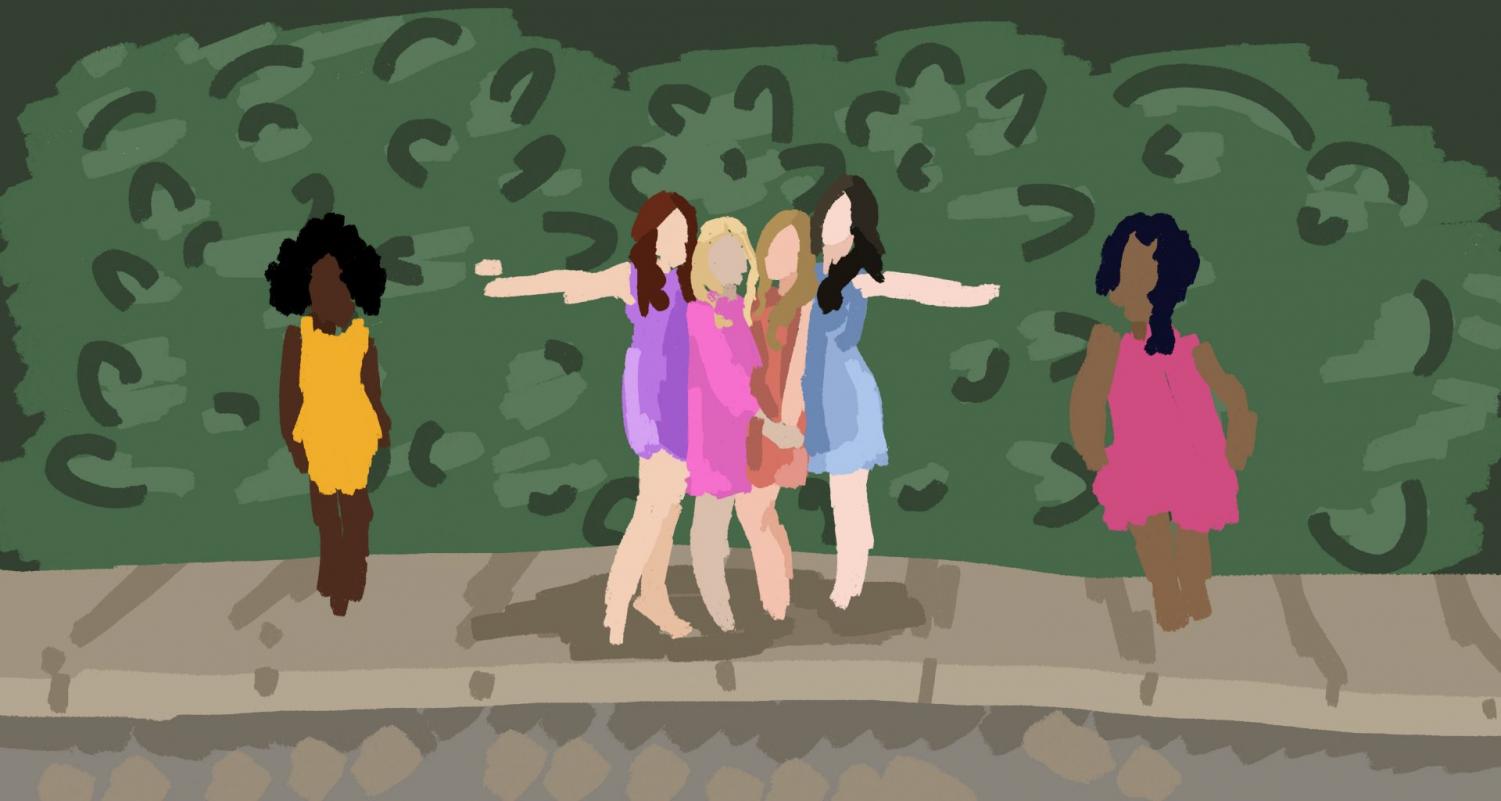 “I never really felt like a member”: Students of color criticize racism in DePaul sororities

Kay Smith was one of only two Black girls in DePaul’s Phi Mu chapter. When she saw how her sorority responded to the rising Black Lives Matter movement, she knew she couldn’t stay silent anymore. Smith left the sorority and took to social media, calling out her now-former chapter for its complacency.

“I told them our diversity was embarrassing and this is why multicultural sororities don’t like panhel, that they are dropping the ball and showed no indication of change or action.,” Smith said. “That this chapter may not be overly racist but they sure as hell aren’t anti-racist.”

Sith, a rising senior at DePaul University, reported via her Instagram account on the racist, microaggressions and lack of response DePaul’s Phi Mu chapter is taking amid Black Lives Matter.

Smith, who, according to her Instagram post, lives 20 minutes away from where George Floyd was killed and in an area that’s experiencing civil rights tensions, said her chapter had been silent in response to the injustice act.

“I felt disrespected to say the least,” Smith said via her Instagram post. “I’m still confused on why Phi Mu thought it was the best idea to only repost some bulls**t headquarters response on our Instagram story and a quote saying ‘In a world where you can be anything you should be kind’ and call it quits — I was speechless.”

♡ In a world where you can be anything, be kind. Be kind, stand up, speak loud, give your all. Be independent and be bold. You never really know the true impact you have on those around you, and you will never know if you stay silent. You never know how much your kindness can turn someone’s life around. Together we are strong, we are united, and we are leaders. Phi Mu stands by our values of Love, Honor, and Truth. LIOB ♡

In response, Smith wrote a statement to an executive board member to bring awareness on the injustice issue.

“I watched my sister’s social media fill with black screens, repetitive posts, and make performative activism,” Smith said. “I suggested a fundraiser, donation board, matching with another chapter who reached out to me, I offered up myself to even do the work — I still wasn’t loud enough.”

Farai Madondo, a rising junior and a former Phi Mu member said to The DePaulia, tensions started to rise when Smith discovered Robert E. Lee is an honorary member of the sorority.

“Things started getting serious when Kay found out Robert E. Lee was an honorary member of Phi Mu. She was rightfully angry,” Madondo said. “While the executive board said they were working on getting it resolved, some other members were being defensive and not understanding why other members were so mad about it.”

Madondo, who dropped out of Phi Mu in solidarity to Black Lives Matter and due to the lack of response from her chapter, said that although she never felt outright excluded, it was challenging for her to find community within the chapter.

“Being the only Black girl, it kind of felt like I was there as some sort of diversity quota because so many of the girls never even talked to me,” Madondo said. “I never felt comfortable just going up to a group of girls in my sorority and talking to them. Last year I even thought about dropping because I never really felt like a member.”

According to Madondo, a fellow member of Phi Mu discovered there are six members at the sorority considered to be people of color out of the 64 that establish the chapter’s page — making up less than 10 percent of the total chapter members.

Madondo said her experience towards the end of her membership at Phi Mu was draining after witnessing how another ex-member was treated for speaking out.

“After seeing the way Kay was met with defensiveness and gaslighting because she cared enough to call everyone out and was clearly angry, made me even angrier because she had become the angry Black girl trope in their eyes,” Madondo said. “I felt like I had to make myself more palatable and non-threatening just so they could hear me. I had to take their feelings into account which is ridiculous. I wanted to scream and curse but if I did, I would just be dismissed like Kay was.”

Madison Casarez, President of DePaul’s Phi Mu, said the chapter is working on updating their bylaws, looking to host workshops and providing further resources for the chapter.

“As for consequences that are taking place, Phi Mu’s process is confidential, and we are unable to share any details or outcomes regarding individual situations,”

Casarez said. “Our hopes is that during this time we can grow as a chapter and become better sisters and allies.”

Like Smith and Madondo, several sorority members at other chapters have come forward to speak out on their racism experience within DePaul’s Panhellenic community.

Annie Lee Carroll, a rising junior and a former member of DePaul’s Chi Omega chapter, said to The DePaulia that racist acts like these are not isolated events in the Panhellenic community.

Carroll dropped out of her sorority after posting an Instagram graphic regarding racism within the Panhellenic community and having several sorority members reach out to her regarding their stories.

“DePaul’s [Panhellenic community] tries to paint itself as super diverse because it’s a city school,” Carroll said to The DePaulia. “But they have a white Panhellenic advisor, a white [Fraternity and Sorority Life] coordinator, a majority white executive board, and an entire organization full of girls who don’t see racism as an issue.”

Carroll said she herself has experienced microaggression and racism within her sorority.

“One time I had a girl ask if I was Chinese or Asian which didn’t even make any sense obviously,” she said. “[In] the Lunar New Year Cultural Appropriation where DePaul athletics made the ‘theme’ Chinese New Year instead of Lunar New Year, the student section was passing around a Buddha statue for whatever reason, the school arranged mini games between quarters with chopsticks and the emcee was wearing a traditional Qipao to the game. We respectfully told her it was not ok and she told our girls that we were stupid and that it was cultural appreciation.”

In response, Carroll said she wants to see more self awareness and more women of color in higher positions in the Panhellenic community.

“Above everything else, I want DePaul’s Panhellenic community to stop exhausting the people of color women in their community for information whenever they want to seem woke,” Caroll said. “Being anti-racist needs to be one of the main ‘targets’ in girls during recrutiment because a majority of the girls are either actively racist or complacent.”

Hana Holman, president of DePaul’s Panhellenic Council, said an Action Plan has been created in hopes of combating acts of racism and microaggressions within the community.

The Action Plan that was created for the return of the 2020 fall quarter includes adding a zero-tolerance policy, the creation of a community incident report form, a required general body meeting on Implicit Biases and Microaggressions, and much more.

“Our hopes in creating the community incident report form is that our board can know about these situations as quickly as possible in order to deem the consequences as necessary,” Holman said.

Holman said consequences will consist of creating sanctions that will benefit the chapter instead of punishing them. This includes mandating seminars that address the root of the incidents or sensitivity training for leadership.

“We plan to train our recruiters and recruitment counselors and team on microaggressions in hopes to educate them and prepare them for a respectful, genuine recruitment,” she said.

According to Holman, DePaul’s Panhellenic Action Plan responded to both Black Lives Matter and racism issues within the Panhellenic community.

“When our board came together for the first time in January 2020, we knew that race would be one of the topics we’d focus on,” Holman said. “DePaul’s Panhellenic Council stands in solidarity with our BIPOC sisters and we plan on taking time out of each of our executive board meetings to discuss racism in our community and constantly brainstorm new ways to combat it.”

Although Panhellenic board members are establishing initiatives in response to the racism found within DePaul’s Panhellenic community, former sorority members like Carroll don’t expect change to happen anytime soon.

“I knew change wouldn’t happen quickly enough for me to be comfortable because Panhel is not willing to be uncomfortable to make a change, so I just left instead,” Carroll said.

“I will always remember the specific girls that wronged me and that were complacent during this ‘sisterhood’ experience,” Carroll said. “[I] know that the unconditional sisterhood is only offered to you when your skin is white and you keep your mouth shut about the problems and imperfections within the system.”

Update (7/16/20): The story has been updated to include a response from DePaul’s Phi Mu.