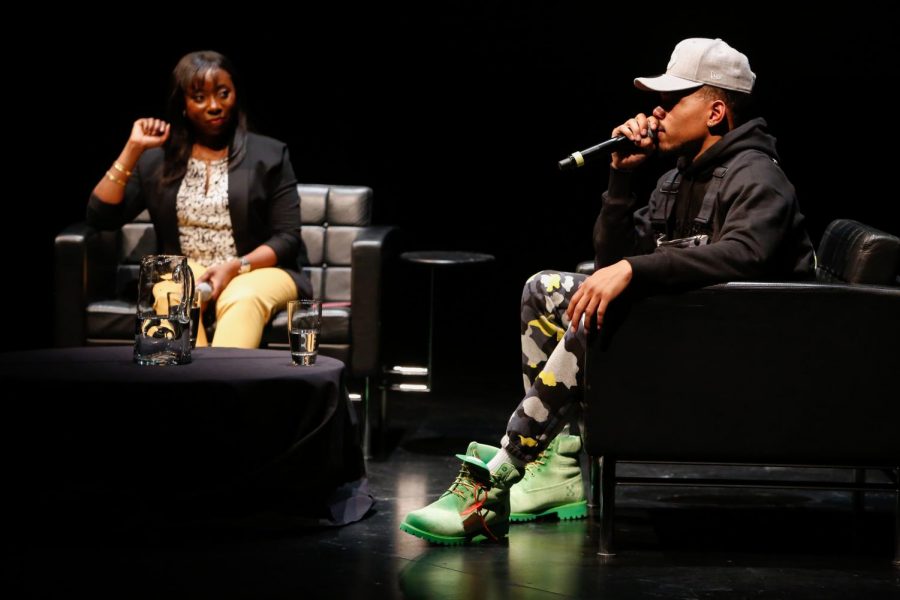 Gallery|3 Photos
Chance the Rapper spent a couple of hours with fans, covering a variety of topics to include Chicago Public Schools and Mayor Rahm Emanuel. Chance said he will live in Chicago until the day he dies. (Photo courtesy of Museum of Contemporary Art)

‘You don’t want no problems:’ Chance gets political

Chance Bennet, better known as Chance the Rapper, made a highly anticipated appearance at Chicago’s Museum of Contemporary Art on Monday.

While the conversation between Chance and South Side journalist Adrienne Samuels Gibbs had a heavy focus on Chance’s artistic process, the two were not afraid to get political and covered a myriad of issues.

The event was part of the museum’s “In Sight Out” series, where highly sought-after artists talk with journalists in an open setting that engages the crowd in an intimate fashion. Tickets were sold out and crowds waited on standby, hoping to vulture a seat.

“I’m super critical of my own work,” Chance said.

Chance mentioned that some of his biggest influences include MC Hammer and Kanye West, much to the delight of the audience.

Chance also mentioned NBC’s late-night sketch comedy show Saturday Night Live as a personal influence and that he one day hopes to host and perform as the musical guest. Chance returned to the subject of SNL multiple times throughout the evening. He mentioned a Batman sketch that he helped to write and perform on when he hosted back in November, 2017.

He called out friend and comedian Kevin Hart for doing a similar Batman sketch on the show, joking that, in Hart’s sketch, Batman was portrayed as a cocaine-possessing black man who gets arrested after a routine traffic stop.

It wasn’t long before Chance had a chance to touch on the state of Chicago Public Schools (CPS), an issue that he has long championed publicly across Chicago. Gibbs asked Chance about his nonprofit, “Social Works.”

“I got to see how CPS functions,” he said. “We are the only district in the state that doesn’t have an elected school board.”

Chance talked candidly about what he says are gross disparities between the state of schools on the city’s South and West Sides when compared with schools in Northern Chicago. Chance said that Social Works has allowed him to gain a real understanding of the issues facing CPS.

“I learned how CPS and Rham Emanuel spends money and who, if anyone, is held accountable,” he said.

Chance was careful to distinguish CPS students and faculty with what he said was “CPS as the business.” He had high praise for CPS teachers, calling them “underpaid.”

As he had in the past when attending a City Hall meeting as a private citizen, Chance criticized Emanuel’s $95 million dollar “Cop Academy,” pointing out the irony that it was being built right down the road from the Englewood schools that closed.

Chance next was asked about a Tweet of his that said, “black women deserve better.”

Chance said he stood by his tweet, discussing in particular the recent controversy surrounding comedian and Netflix star, Mo’Nique. Recently, there have been calls for boycotts from fans, other artists and Mo’Nique because of an equality of pay dispute.

“I see how deeply embedded racism and sexism are and realize that I can’t call myself free or call myself liberated, unless black women are liberated.”

Chance stopped short of condemning Netflix, adding that he still wanted “that Netflix money someday,” which drew big laughs from the audience.

During the Q and A session toward the end  of the evening, Chance took  a few questions from among hundreds of eager fans, with the organizers mentioning that they had never seen so much audience participation.

One audience member asked if Chance would be endorsing any candidate for governor in the upcoming primary election on March 20. Chance replied that he wasn’t, but that could still change.

“They gotta schedule a meeting with me, yo, tell me what you are really about,” he said.

Chance went on to say that he was fed up with the two party system, and that he thinks “a lot of new leaders are going to be running independent.”

“I know that independents ‘never win,’” he said. “But I think that is the way things are headed. There are so many specific issues that can’t get dealt with on a party level.”

Chance also said he believed that Chicago would be seeing some “superhero” independent political candidates, who, he hopes, will stand on important issues rather than partisan politics.

A reporter from The Tribe, an online music magazine written primarily for black millenials, got the final question of the night, using it to press Chance again on the Englewood school closings.

“I feel cheated,” the musical artist said. “I feel angry. I feel vengeful.” He again took shots at Emanuel.

“I feel like there are people that aren’t nameless,” he said. “You feel like you are fighting ‘the man’ or a faceless entity…but these people have names. Rahm is on that list and there is no way to hide it.”

Chance left his fans with a message of positivity.

“I’m here. I’m staying posted. I’m not going anywhere. I’m going to live in Chicago until the day I die,” he said.