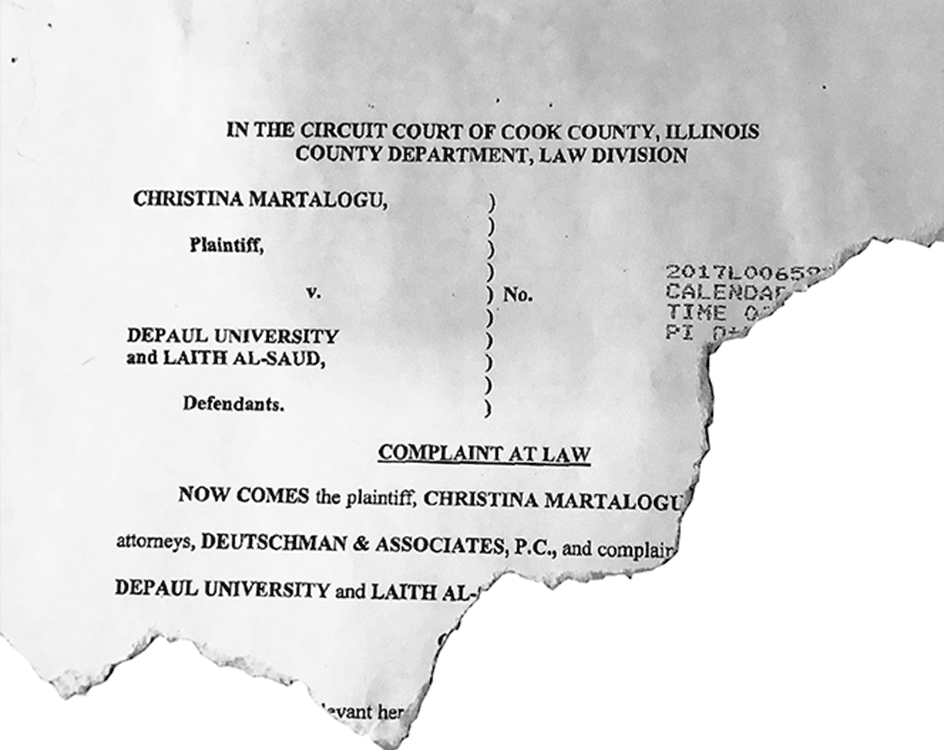 Some parts of this story may be upsetting or disturbing to readers, as the language used in court documents that The DePaulia recovered includes graphic sexual language.

A lawsuit from a former DePaul student accusing a professor of coercing her into sex raises questions about dating between students and faculty at a university that has no explicit rules governing romantic relationships between the two.

Last June, former DePaul student Christina Martalogu filed a lawsuit against both DePaul University and Laith Al-Saud, a former DePaul professor in the Department of Religious Studies seeking more than $200,000 in damages.

She is suing on three counts: battery, the Illinois Gender Violence Act and negligence. On the first and second counts, Martalogu wrote that Al-Saud coerced her into sexual intercourse twice — once in his home after the two went out for a drink, and once weeks later in Al-Saud’s on-campus office.

The lawsuit raises questions about the propriety of students dating professors, often much older men, who can hold considerable power over their academic careers.

Al-Saud was 38 and Martalogu was 24 when they began their relationship.

No explicit policies regulate dating or sexual relationships between faculty and students, according to Karen Tamburro, DePaul’s Title IX Coordinator. Title IX is the federal law prohibiting sex discrimination and harassment in schools that receive money from the U.S. government.

While DePaul University was sued for negligence, a Cook County judge has since ordered the university be dismissed from Martalogu’s lawsuit. In its request to be dropped from the case, DePaul wrote, “an employer cannot be held vicariously liable for sexual assaults committed by an employee.” An attorney for Martalogu, Jeffrey Deutschman, said his law firm is appealing the judge’s decision to dismiss DePaul from the case.

Upon request for comment from Martalogu, Deutschman said he would not allow his client to speak with The DePaulia.

The negligence count in the lawsuit says that the university “knew or should have known” that Al-Saud was the subject of many complaints for sexual harassment, unwanted touching and obnoxious behavior during work hours in full view of his students.

Al-Saud and his attorney did not respond to multiple requests for comment, but court documents show they are contesting Margalogu’s version of events.

According to the lawsuit, Martalogu signed up to take a religious studies class with Al-Saud in the spring 2016 quarter. One day, Al-Saud emailed Martalogu asking to get a drink after class. The lawsuit says she felt pressured to meet with him because he was her instructor in a current class.

In the lawsuit, Martalogu said that Al-Saud picked her up in front of a campus dorm and the two went to dinner, something he denies, according to court documents. Then, Al-Saud “plied” Martalogu with alcohol, the lawsuit says, and as they walked near an alley after dinner, he stopped to smoke some marijuana and kiss Martalogu. She said no and turned away.

However, during the drive back to campus, Al-Saud told Martalogu he wanted to show her his home, and Martalogu once again felt pressured to agree. After using the restroom in his home the lawsuit says, Martalogu came back out to a naked Al-Saud who began to “aggressively seek sexual relations” with Martalogu. She wrote the two had sexual intercourse at this time.

Several weeks later, Al-Saud asked Martalogu to come to his office on campus to talk about their previous meeting. According to the lawsuit, Al-Saud wanted to know why Martalogu did not orgasm with him. Then, when she refused to have sex in his office, he told her that she should “get on the floor and play with herself in front of him.” She said she felt compelled to do so because the commands were “at the direction of her university instructor.”

Al-Saud is not currently employed at DePaul, according to spokeswoman Carol Hughes. He began at DePaul as an adjunct professor in the fall of 2005, and worked as a full-time professor in the Department of Religious Studies from Autumn 2011 to Spring 2017. Hughes said she could not comment on Al-Saud’s reason for leaving DePaul.

In his rebuttal, Al-Saud said that Martalogu was a “non-traditional” college student at the age of 24, having already been married and divorced.

Al-Saud argued that Martalogu and he had developed a mutual friendship and according to his own account, as detailed in court documents, “there was chemistry between them.” Her response to his email invitation for a drink was, “Sure, let me know when you are free,” and she also sent Al-Saud her phone number even though he had not asked for it, according to his written version of events.

Al-Saud admitted to engaging in sexual intercourse with Martalogu in his defense statement, but said no alcohol was consumed by either on that day. He says that she consented to engaging in a sexual relationship with him.

DePaul’s Sexual and Relationship Policy does acknowledge the difficulties that relationships between individuals in inherently unequal positions (such as professor and student) can bring, but there is no written university policy outlining any limitations.

DePaul states it is committed as a university to providing an environment free from harassment, including sexual and relationship violence. In its written policy, it notes consensual romantic or sexual relationships may provide grounds for complaint and that consent may not be considered a defense against a charge of sexual harassment.

Martalogu is not the only student Al-Saud dated while he was a professor at DePaul.

Rebecca, a former student of Al-Saud whose name has been changed by the editor to protect her identity, shared details about her relationship with him.

“(Al-Saud is) not scared to talk about sensitive topics, like relationships or sex, and not in a gross way,” Rebecca said.

“I was looking at master’s programs and I was at a crossroads, so I asked him for advice,” she said.

Rebecca said she asked Al-Saud to grab a coffee after class to further discuss her future academic career. He accepted the invitation.

“We met on campus and talked about my master’s degree for a little bit and randomly started talking about other topics,” Rebecca said. “At the end of the conversation, he said, ‘Why don’t we grab a drink at the end of the quarter?’”

According to Rebecca, the interaction over drinks was more personal and there was a mutual connection. She told The DePaulia her relationship with Al-Saud was entirely consensual.

In her lawsuit, Martalogu accuses Al-Saud of abusing his position as professor by coercing her to have sex, and says she felt pressure to do so in order to get an A.

But Rebecca, who dated Al-Saud, said he gave most of his students A’s as long as they attended class and participated.

“The first thing he said on the first day of class is, ‘I don’t believe in grading. If you show up to my class you’re going to get an A.’ He cares about discussion, being engaged and having deep conversation over her assignments.

According to Rebecca, DePaul officials approached her after a fellow student reported concerns about her relationship with Al-Saud.

“I was contacted by the Title IX Coordinator at DePaul about my relationship with (Al-Saud). I think a friend of mine thought (Al-Saud) projected himself on to me and thought I was uncomfortable. I told her (the Title IX coordinator) I’ve never felt uncomfortable around him, he is not that type of person.”

Rebecca said she was initially surprised to find herself dating a professor, “ (…) but then I thought, we were just two people attracted to each other who just happened to meet on campus.”

She and Al-Saud are no longer in a romantic relationship but continue to speak as friends.

Holly McNally took a class with both Al-Saud and Martalogu in Spring Quarter of 2016.

Because it was a 9:40 a.m. class in Lincoln Park, McNally said she usually sat in the back of the classroom wearing sweatpants and didn’t often interact with Al-Saud. However, she said other girls in the class seemed to have more “intimate” relationships with the professor, and that Laith engaged more frequently with his female students than with his male students.

“He is an attractive guy,” McNally said. “He’s one of those people who knows he’s attractive and uses that to his advantage.”

When told of the lawsuit, McNally said she feels it makes sense.

“That’s not surprising to hear about him,” she said.

According to McNally, Al-Saud was a laid-back, joking professor — but those jokes often bordered on the line of flirtation. She said he was the most non-traditional professor she’d ever had, and he frequently tried to avoid direct involvement with the university.

He would give out his personal email to the class and tell students not to contact him through his DePaul email, as he was not as likely to respond there. A copy of the syllabus obtained by The DePaulia confirms that Al-Saud encouraged students to use his personal email. He also asked all his students to follow him on social media, according to McNally.

Al-Saud would emphasize in class that even though he was teaching from an Islamic perspective, he himself is not a traditional Muslim. He would occasionally discuss his drinking and smoking habits in class, and imply that he’d had premarital sex when talking about his ex-girlfriend.

According to the lawsuit, Martalogu felt pressured to accept Al-Saud’s invitation for dinner and a drink because he was her professor in a current class. The lawsuit said she felt similarly when he asked her to return home with him.

McNally says that students often took classes with Al-Saud because he was an “easy A.” He told students they would not be graded on attendance, she said, and he always showed up to class 10 or 15 minutes late himself. She says the only grade for the class she took with Martalogu was a group paper and debate.

According to the lawsuit, when Al-Saud asked Martalogu back to his office and sexually coerced her a second time, he told her that she would get an A and she wouldn’t have to take the final exam. Al-Saud denied those allegations in court filings.

One student on Al-Saud’s Rate My Professor page described his classes as “Easy-peazy nice-’n-easy! Easy A.” It’s a sentiment that’s expressed across multiple anonymous entries.

One student also wrote, “Laith is very laid back. He respects students and in return is respected by them.” Users frequently refer to Al-Saud as “the man,” and find his classes entertaining.

In his defense statement, Al-Saud acknowledges that he does not believe in grades.

In an online poll conducted by The DePaulia, 100 students were surveyed on their opinions of student-faculty relationships. While 52 percent of respondents said that they think DePaul students and faculty should not be allowed to date, 80 percent of those 100 students said that they think DePaul “should have a clear policy about student-faculty relationships.”

McNally herself feels uncomfortable about relationships between students and professors.

She attended a South Side high school, where she said she heard rumors of two teachers who were asked to leave for having affairs with students during her time there.

“Even if it’s consensual and both parties are of age, it’s still weird to me because it feels like an authority figure taking advantage of the power they have over the student,” she said.

This story was a collaborative effort that features reporting by Amber Colón, Nesrine Charif, Megan Stringer and Dirce Toca.