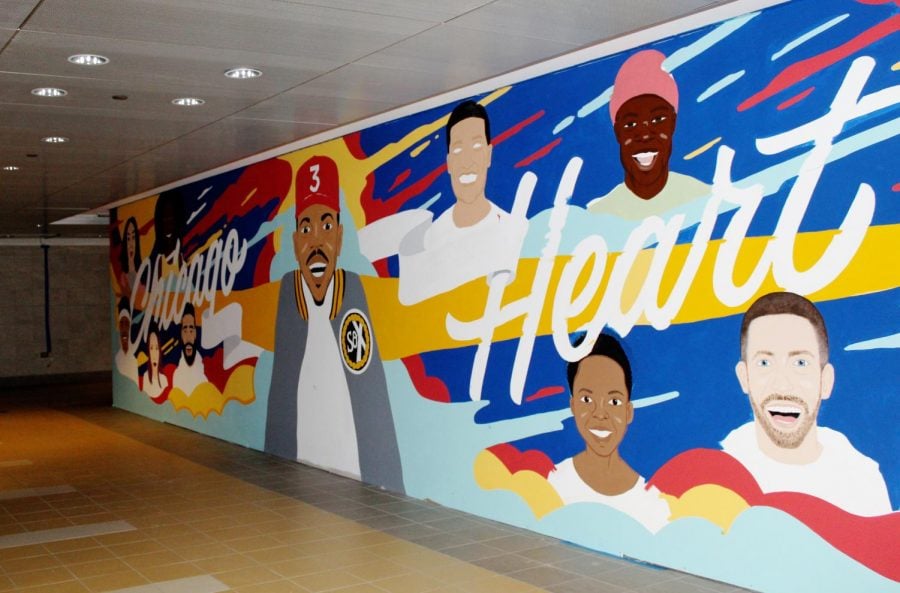 Underneath Randolph St., only a block away from Michigan Ave. in the Heritage Pedway, DePaul junior Amoz Wright and School of the Art Institute (SAIC) sophomore Sarah Wilson were in the zone. Wilson, sitting high up on a ladder, was painting the face of Chicagoan and photographer René Marban. Sitting on a crate below her, Wright worked on the dark shade of activist Bella Bahhs’ face.

The two college artists along with SAIC senior and artist Skyler Sun were creating history in the underground pathways of downtown Chicago. They were painting the first mural in the pedway system.

Sun, Wright and Wilson were capturing a sentiment that is strong within Chicago’s artistic scene: the undeniable impression of rising talent within the city and the responsibility that comes with it. The kids have grown up and so have their talents.

“We feel like having these rising stars on the wall is almost like a perfect representation of what is going on in Chicago right now. Chicago is almost in a state of an art renaissance,” Wright said. “A lot of the people that you see on the wall are pioneers for pulling the city off the ground. We thought it would be a good idea to include them in this project with Chance the Rapper.”

Because, within the city, there is no better local artist that represents the growing wave of Chicago’s young creatives than Chance. The decision to include him surrounded by ten other rising talents in the mural was a conscious decision.

“He is kind of like a face for rising stars. All the people here got the chance of doing the same thing,” Wright said. “They’re all adding something to the city whether it be through their talents, their volunteership or whatever it might be so I thought it would be cool to … have them in the piece.

“I think it’s a pretty monumental thing to have your face be on a mural in a public space and such a huge one at that,” said entrepreneurial DePaul junior and neckwear designer Keyante Aytch. “It’s a pretty awesome thing to be able to have something that you can look back on … for years and years.”

The color combinations of rose red, bright yellow, navy blue and turquoise splashed in the background brought life to the dullness of the pedway system. And that was the exact intention of Mid-America Asset Management, the leasing company that owns the underground space and that is seeking to bring more traffic into the pedway. In December of 2017, Sun responded to a “Looking for artists” ad from the company in SAIC’s job board; according to Sun, within an hour he was in contact with the owner of the space, checking out the location.

“People just use this (pedway) while they’re on their phone walking through to get to the next street so then when people walk around that wall and see color in the glass reflection, they come around and they get to enjoy something,” Wilson said. “They just get to (think) ‘Oh, that made me feel a little bit brighter walking out into the shitstorm of Chicago.'”

Wilson was brought onto the project after Sun realized the amount of work creating a mural would entail.

“He told me about the mural and I was really excited because I wanted to help, but I didn’t want to say anything,” Wilson said. “I didn’t want to get in his project, and eventually he was like ‘Yeah, we’re going to need a lot more help than I thought, so I want you to come on as a painter’ and I said, ‘Absolutely, done deal.'”

Sun and Wright met for the first time at an SAIC art show only two weeks before Sun was commissioned to build the mural.

Each artist dedicated themselves to different areas. Sun focused on the design of the type and background, while Wilson’s interdisciplinary focus on painting at SAIC came into play as she painted all eleven faces. Wright was responsible for sketching the faces and bodies, and Wilson focused on the details within the painting. For all three artists it was their first time working on a mural of this magnitude, each one of them working on each process together.

For a couple months, Wright and Sun went back and forth between potential concepts and designs. At first, Wright played with the idea of portraying notable Chicago musicians like Common, Kanye West and Chance the Rapper. He soon decided, however, that the mural’s locations wasn’t the appropriate space for the three musicians to be at. He didn’t think the message would deliver.

After a Google search, Wright came across a photo of Chance on Saturday Night Live with his arms spread wide. Having to fill a 40-foot-by-8-foot-tall canvas, he saw potential in the image and decided to go with it.

In the finished piece, the phrase “Chicago has my heart”  will be sketched across the mural, interwoven perfectly between the strategically placed faces of Chance and the ten other Chicagoans.

The artists took inspiration from Kevin Coval, the creator of Chicago Young Authors, an organization dedicated to giving a literary outlet to inner city kids. The last poem in his popular poetry book, “The People’s History of Chicago” is titled, “Chicago has my heart.” Sun and Wright believed the title captured the same sentiment.

“I feel like this mural kind of sparked from that. It’s like telling the history of Chicago through poetry, art, entrepreneurship,” Wright said. “We had to figure out almost in a sense of the size kind of being the metaphor … of where they’re at in their careers because they’re still rising. … They all have great potential to be there.”

The “Chicago has my heart” mural will debut on Thursday, May 24, when the public can gather to watch the artists paint the final strokes on the wall.

“The cool thing about this is when people ask me, ‘Oh, who are these people?’ You get to say ‘Oh, you’ll know in a couple years, don’t worry about it.’ (That’s) already happening,” Wilson said. “Also the idea that Chicago has my heart: Yeah, it definitely takes part of your heart when you get to put your mark on the wall.”