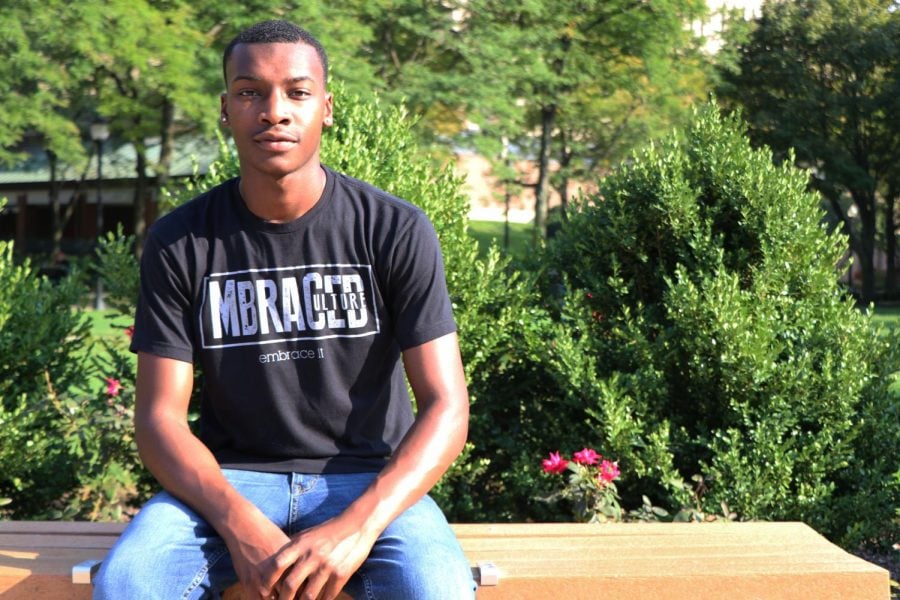 Braylen Stevens, above, is the founder of MBRACED Culture, an e-commerce brand that hopes to promote acceptance of others and create a sense of community.

While most DePaul students scramble to find an internship and try tirelessly to build a resume before graduation, sophomore Braylen Stevens is one step ahead, already running a business of his own.

Originally from Milwaukee, Stevens is a 19-year-old accounting major who founded MBRACED Culture, which specializes in social outreach and the selling of branded apparel.

“We really focus on three things: outreach, promotion, and apparel,” Stevens said. “We do a lot of workshops on career skills and communication skills, team building and other stuff like that. We also focus on promotion, so collaborating and networking with artists. We try to serve as a resource to them by promoting them, their events and their work.”

Fueled by a desire to help his community, Stevens had the idea for the company upon graduating high school. “In the summer of 2017, I was thinking: ‘What can I do, how can I serve my community and others and what impact can I make?,’ Stevens said. “That’s how MBRACED Culture came about, it was about doing research to find out what the community needed and how I could contribute.”

Stevens said he began to make concrete plans in April 2018, the company then launched on June 24, 2018. Stevens discussed the importance behind the company name and how it represents the overall message of self- acceptance and positivity proposed by the brand.

“I knew I wanted a name that not only popped but was unique in a way but still relatable for everyone,” Stevens said. “‘Embrace it’ is really what we follow, but I wanted to create that cultural aspect in the community, so putting ‘embrace it’ together with culture created MBRACED Culture.”

Stevens said the message of the company was inspired by his own struggles with self-acceptance while growing up. In a statement on the company’s official website, Stevens details his initial embarrassment at not having interest in sports like the rest of his male peers. Stevens later discovered his passion for the performing arts and grappled with frustration and shame because of his alternative interests. Eventually coming to accept and appreciate his passion, Stevens hopes to inspire others to do the same.

Stevens says that the creation and selling of branded materials, like hats and T-shirts, is very important for the promotion of the company.

“Because MBRACED Culture has such a bold name for itself, we throw our logo on to apparel so we can market ourselves and be seen,” Stevens said. Since MBRACED Culture is an e-commerce brand, Stevens recognizes the importance of in person-promotion and fostering strong customer relationships.

“We don’t have a storefront, but we do set up at different community events, like music festivals,” Stevens said. “We’re kind of building more of a community in being present with our audience as well.”

Stevens said that he hopes to gain traction for the company at DePaul, mainly through word-of-mouth promotion and wide-spread brand recognition through their self-referential apparel.

In terms of dealing with the challenges brought on by school and managing a business, Stevens says that balance is key.

“Right now I’m still learning, just because it’s so early in the school year and classes have just started,” Stevens said “Overall, finding what I need and the necessities for myself with my everyday routine is something that I really strive to do, but overall I wouldn’t say it’s too much of a challenge. It’s definitely taken time but I’m enjoying the process.”

Even though the company and its founder are young, Stevens has high hopes for the future of MBRACED Culture and the power of its message.

Stevens hopes that, with the brand’s increased popularity, their message will spread as well through DePaul and larger communities.