“I don’t think you can hype this movie up enough,” said DePaul directing, theory and cinema production professor Andrew Stasiulis as he kicked off a post-screening discussion of the classic monster movie “The Invisible Man” with his students and few other patrons in the Music Box Lounge. 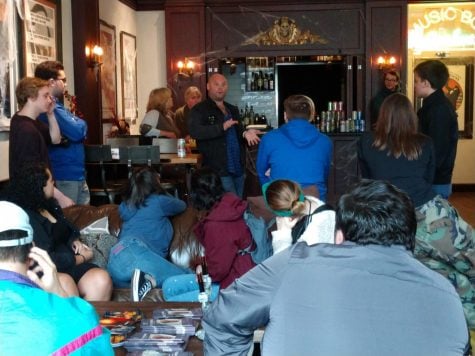 This screening and discussion are part of Stasiulis’ class DC 370/470 Advanced Topics in Cinema – Universal Horror Films: Monsters, Madness, & the Macabre. In addition to usual lectures, the class meets at the historic Music Box Theatre throughout the month of October to watch classic monster films on the big screen in glorious 35mm for a “unique classroom environment,” according to Stasiulis.

“I started working with the Music Box and I said, ‘Hey, wouldn’t it be awesome if we could do a class where we explore cinema and celebrate cinema and the students can come and experience the films the way they weren’t meant to be seen on the big screen at the beautiful Music Box?’” Stasiulis said. “It’s also a hope of mine to create a deeper partnership between us and the greatest theater, I think, in the country.”

The idea for this collaboration was not initially focused on Universal horror films. Stasiulis’ original idea was to have a class about World War 1 cinema in honor of the centennial of the armistice.

“For me, I think it’s very important for students to get an opportunity to present on what they think is interesting so a big portion of our class is students leading the discussion. So I try to create an environment of conversation.””

“Then Ryan [Oestreich, general manager of the theater] said, ‘Hey, how about instead of World War I, we do classic horror because it would be Halloween? It’s October, everyone loves it,’” said Stasiulis. “And I was like, ‘Yeah, let’s do it.’ I love these films and I think they’re so influential and so important and students really seem to enjoy them so I think we both agreed that that would be a more fun way to explore than horrific films about World War I.”

The class meets on Monday nights to discuss the productions, the legacy, the influence and all the contextual factors of the times these monster movies were produced. Stasiulis, however, doesn’t want the class to be a typical lecture; he wants it to be a full, student-led discussion.

“For me, I think it’s very important for students to get an opportunity to present on what they think is interesting, so a big portion of our class is students leading the discussion,” Stasiulis said. “So I try to create an environment of conversation.”

Two students that are a part of that conversation are Megan Henning and Farouk Kannout, who were drawn to the class out of their admiration for both Stasiulis and the Music Box.

“I’ve taken so many other classes with Andy and I knew that I would like this,” said Henning. “All of the movies on the syllabus, I have never seen so I feel really lucky that I got to see ‘The Invisible Man’ on the big screen in 35mm and not my dirty laptop screen while I’m not paying attention.”

“I like the way Andrew teaches and I’m into talking about movies politically and philosophically and whatnot but it’s also just a really good excuse to go to the Music Box,” jokes Kannout.

If there is one thing that Stasiulis wants his students to take away from the course, it is an admiration for history and the influence it has had on where cinema is today. The Music Box helps him get that point across.

“The ghosts for all this as well I think are very appropriate because this theater was opened in 1929 and I promise that there were people in the city of Chicago in 1933 who sat in that theater and watched what we just did,” said Stasiulis. “I want my students to have a much deeper understanding of the classics to look at where we are now.”