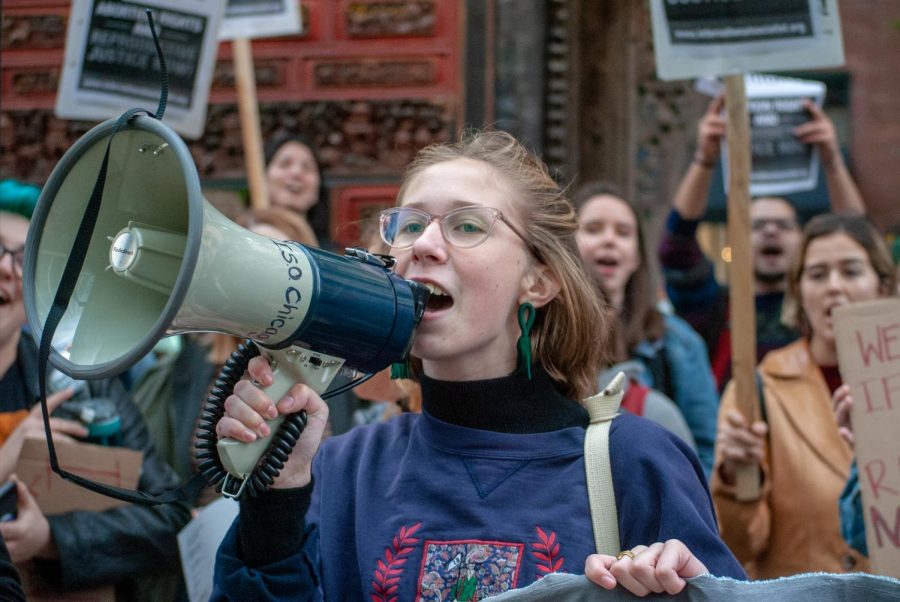 Holding onto a megaphone, a protester stands outside the American Bar Association Chicago in opposition of the nomination of Judge Brett Kavanaugh following sexual assault claims.

A walkout spearheaded by DePaul’s Students for Reproductive Justice (SRJ) was staged on the Lincoln Park campus on Oct. 4.

In preparation for a larger rally at the American Bar Association in River North, about 75 students gathered in the quad and took turns voicing their distaste for the Supreme Court nominee Brett Kavanaugh.

Kavanaugh was accused by Dr. Christine Blasey Ford of sexual assault during their high school years, and a hearing was held on Sept. 27 to question Ford and Kavanaugh about the claims.

The hearing has attracted nationwide attention, with President Donald Trump publicly questioning Ford’s credibility and a number of celebrities expressing their solidarity with Ford.

Anais Donald, a longtime member of the DePaul Socialists, helped to organize the walkout and protests with SRJ.

“We wanted to see if we were capable of uniting students on campus around women’s rights and reproductive rights, which I think we were successful in,” Donald said. “Protesting isn’t just about going out and yelling. It’s about showing the public and showing our government in particular that people are watching them and they are dissenting. And in our opinion, it has a pretty awesome effect on the way people organize.”

After the walkout, the DePaul protesters headed down to the ABA in River North where they assembled with other students from Columbia College Chicago, Loyola University Chicago and University of Illinois at Chicago. According to the International Socialist Organization (ISO) Facebook page, the demonstration was endorsed by the International Women’s Strike and the National Lawyers’ Guild.

Just a couple hours later, about 200 protesters were outside the ABA calling for Kavanaugh’s disbarment. “Sexist, rapist, anti-choice / Disbar Kavanaugh, hear our voice,” they chanted. Though the ABA does not have the authority to disbar anyone, this did not stop protestors from gathering to voice their opinions.

Nearby, a handful of students from the DePaul College Republicans sat and observed the demonstration. A few of them pulled out bright red “Make America Great Again” hats and set them on their heads.

Earlier in the day, the College Republicans used chalk to write messages in support of Kavanaugh at various locations around the Lincoln Park campus, much to the disdain of more liberal students.

“We stand with Brett Kavanaugh,” read one of the messages, which were quickly wiped away that afternoon but not before making rounds on social media. 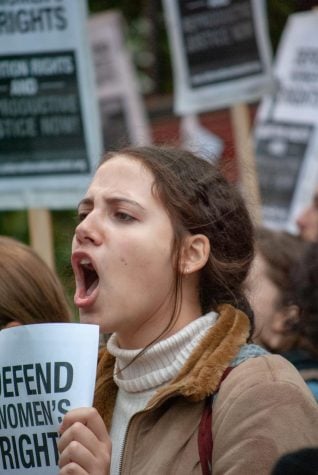 Despite the widely negative reaction to the chalk messages, the DePaul Republicans stand by their decision.

“We don’t have necessarily an interest in trying to counter-protest because that’s an exercise in futility—you’re just yelling at each other,” said John Minster, Vice President of the College Republicans. “But the point is to show people that despite how vitriolic this whole situation at this point has become, there are people who do believe the other side and do stand with Judge Kavanaugh in our school, and so it’s worth showing that.” 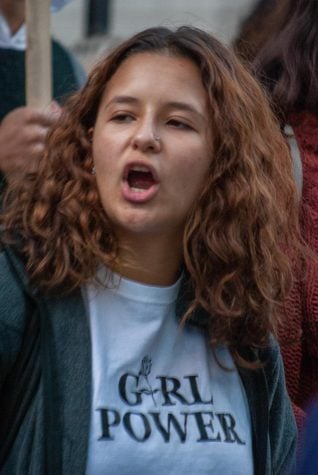 Those at the protest remain unimpressed by the College Republicans, with some suggesting that they are hiding behind their words rather than attempting to make a stand.

“I’m not surprised by it,” Donald said. “I think it’s a little bit cowardly because it’s meant to incite dissent without actually being there to confront it. They know their opinions aren’t popular on campus, which is fine, they’re just so frank about being proud of that. But also there’s, what, like 10 of them? That wasn’t my biggest concern. They have no power on this campus. They’re just annoying at this point.”

Though Minster and the College Republicans certainly represent a political minority on campus, Minster was confident in his reasons for siding with Kavanaugh.

“The evidence points in favor of Kavanaugh, so if the majority on campus is against the evidence—fine,” Minster said. “When it’s a ‘he said, she said,’ you have to ask yourself who is most likely to be telling the truth. And when the four people that Dr. Ford have named all said—even her friend—that ‘no, we had no knowledge of this, we were not involved,’ I don’t know how else you’re supposed to go on who is correct.”

Minster stated that the College Republicans doubt the credibility of Ford’s testimony.

think, in my view, it sullies somebody’s name without actually providing any real evidence beyond what one woman says and what another guy says.”

Despite intense scrutiny by conservatives in favor of Kavanaugh, Ford has kept the steadfast support from students at the rally. During her testimony, Ford maintained her composure and spoke with poise, whereas many of the protesters argued that Kavanaugh’s behavior was “disgraceful” and enough cause for the rejection of his nomination.

Regardless of a national outcry and the efforts of protesters across the nation, Kavanaugh was confirmed to the Supreme Court on Saturday, Oct. 6, with a Senate vote of 50-48.

However, Donald said that she and her peers must remain headstrong going forward.