DePaul University students may have another public transportation option soon if Chicago approves electric scooter sharing, which has been used in  cities throughout the U.S. and the world to help commuters travel short distances that aren’t easily served by existing transportation but are too long to comfortably walk.

“We also have a lot of commuter students that live relatively close to campus which could benefit from a short scooter ride directly to their apartment rather than other options,” Stewart said.

Chicago has not approved the use of electronic scooters at the time of publication. 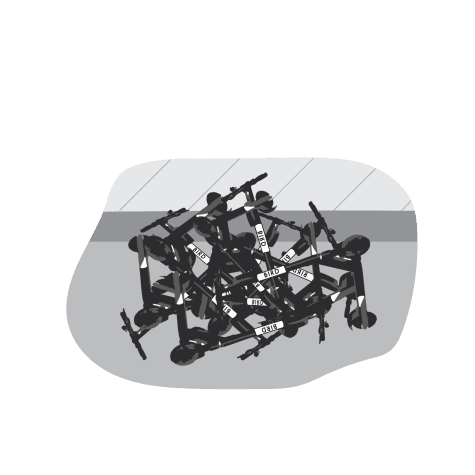 E-scooters are similar to the non-electronic version in appearance, but instead of having to be peddled, riders stand on the footboard and push on a throttle button with their thumbs to accelerate. The scooters have brakes that can be used to slow down when needed.

Bird is one of the world’s leading e-scooter companies. According to their website,  e-scooters are  accessible through Bird’s app, which shows users where nearby vehicles are. Once a rider has found a scooter they want to use, they can tap a button to unlock and ride when they please.

A report published by DePaul’s Chaddick Institute for Metropolitan Affairs found that although e-scooters alone would not significantly lower commute times between neighborhoods, but they would help users get to transit stops quicker.

Although the city already has shareable transportation in the forms of Divvy bikes and ridesharing apps like Uber and Lyft, scooters could fill the gap left by existing options.

E-scooters are cheaper and more environmentally friendly than cars, according to Bird’s website.

An  enviornmentally friendly method of transporation could be an ideal change for a heavily-polluted city like Chicago. A 2018 report by the Better Government Association and NBC5 recently declared Chicago as the worst major American city for recycling. A less  harmful method of public transportation could shelp to improve the city’s carbon footprint.

A Vox report shows that while the cost to rent a shareable scooter varies by city, they generally start at $1 and 15 cents per minute after the initial pick-up.

Additionally, the scooters could be more accessible than Chicago’s Divvy bikes, which has fewer stations the farther one goes from the Loop, according to a map on the bike sharing company’s website.

Because e-scooters have a smaller footprint compared to bicycles, they can be made available in more places, and therefore are less geographically constrained.”

“Because e-scooters have a smaller footprint compared to bicycles, they can be made available in more places, and therefore are less geographically constrained,” the Chaddick Institute reported. “Furthermore, unlike many cities’ docked bike share systems, e-scooters are free-standing and do not need to be returned to a designated station.”

One student, KC Paleracio, said scooter sharing sounds like it could help with his commute from the suburbs, which can take up to three hours with the Metra and CTA trains.

“I get to Chicago around 6 a.m. and walk around until I have class, which can be difficult when the weather is bad, especially in the winter,” Paleracio said.

Shareable scooters could make it easier for him to get from place to place while he’s waiting for class to start.

Although Chicago currently does not allow any of the scooter companies to operate within the city, new transportation options, including e-scooters, are being evaluated by a new Transportation and Mobility Task Force the city created in September, according to a news release from Mayor Rahm Emanuel. The task force includes DePaul professor Joseph Schweiterman, one of the authors of the Chaddick Institute’s report on scooter sharing.

“Chicago has strived to maintain leadership in the transportation space, and we see this Task Force as the guiding force for the City’s next generation of mobile innovation,” former U.S. Department of Transportation Secretary Ray LaHood said in a statement.

Other cities that have implemented e-scooters have seen several safety issues, such as users riding on sidewalks or not wearing helmets as recommended, mechanical issues and scooters being left in the middle of sidewalks and streets.

The city of Portland, Oregon, which is currently in the middle of a four-month trial with its e-scooters, has been handing out free helmets and is conducting a public information campaign, according to NPR.

Bird once pledged to donate $1 per scooter per day to cities that build infrastructure such as bike lanes, but has since rolled back the plan. Cities that did not incorporate the plan into their legal agreements when approving scooter sharing have no way to enforce it. Bird did not respond to requests for comment.

Chicago’s task force expects to release its final recommendations for the city in early 2019.