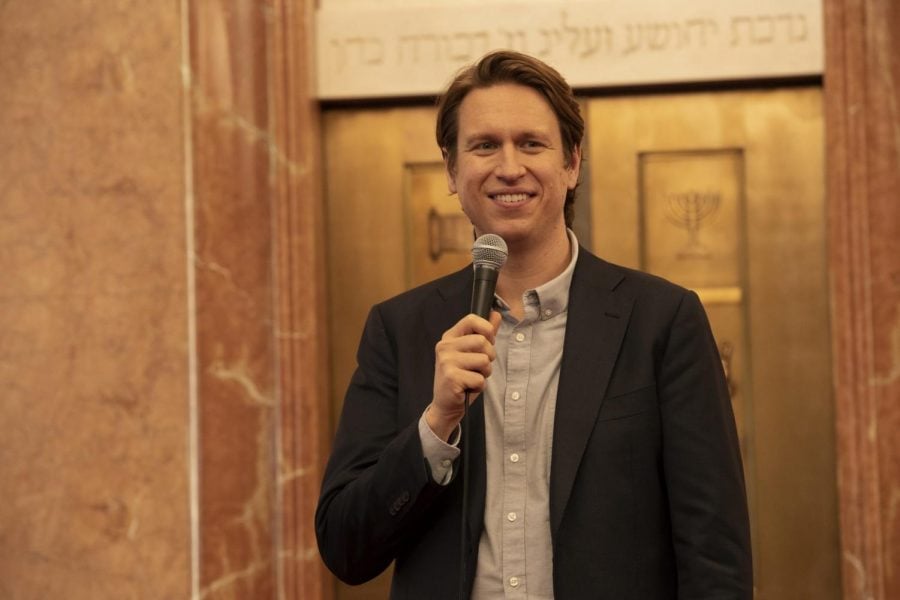 Pete Holmes on comedy, commitment and the third season of ‘Crashing’

“I always make the joke that we call the show ‘Crashing’ not ‘Flourishing’ for a reason,” said comedian Pete Holmes, the creator and star of HBO’s “Crashing,” now in its third season.

In the new season, Pete sees his career and life in general, finally turning around for the better but he’s still far from having it all figured out. And the newfound lack of turmoil in no way diminishes the sheer amount of comedy packed into each episode. With a revolving-door cast of brilliant comedians both old and new, “Crashing” has found itself in the unique position of a premise wherein comedy is a given. For Holmes, this is a unique benefit.

“I think that ‘Crashing’ is sort of about following your dream and when you make that dream comedy all the characters have an excuse to be really funny,” Holmes said. “It doesn’t matter what the dream is but because its a comedian and all the people hanging out with Pete are comedians, it’s kind of more believable that people speak in jokes and are constantly riffing around.”

Compared to other sitcoms that might be funny but focus on completely different characters Holmes said, “We sort of enjoy the luxury of feeling real and also having everyone be really funny.”

In typical “Crashing” fashion, each episode is littered with famous faces of comedians, either as a major role or just a brief cameo including an unscripted scene featuring Amy Schumer. While shooting the show at a club near her house, Holmes said that Schumer simply stopped in and was automatically invited into the scene.

“Amy popped in and that is not only a good moment on crafting, that is sort of what crafting is about,” Holmes said. “Comedians helping each other and also unexpected pop-ins so it was really like an art imitating life type of moment.”

Through “Crashing,” Holmes has also cultivated a jumping-off point for many comedians just getting their start. For example, former DePaul student Jaboukie Young-White was featured in the season premiere titled “Jaboukie.” He starred as himself, a young and talented comedian who is new to the game but good beyond his years. It’s in this young comedians success that Holmes is able to shine a light on an often overlooked but all-encompassing and toxic aspect of the stand-up scene: jealousy.

“There’s always going to be these comedians where it feels unfair that they’re so talented and that they’re so young and special,” Holmes said, referencing Bo Burnham as an example. “I think it’s super important, and that’s another thing I want to show on “Crashing.” That it’s really really stupid to hate these people and it will fester inside of you and eventually take you down.”

Holmes spoke of countless times when people he knew became so engulfed by the jealousy and rage aimed at others that they quit comedy altogether. For many of these comedians, Holmes said, their hearts and minds were set on fame and success rather than on comedy itself.

“I wanted to put that stuff in the show because that’s what it’s like,” he said. “You have to take those sort of ego hits and realize that you got into comedy because you love being funny and it called to you. It has to be in you.”

Throughout the season, Pete has his sights set on auditioning and making the cut at the legendary Comedy Cellar. The stage has launched the careers of countless comedy icons and Pete intends to follow in their footsteps. The only issue is that he has to not only be funny, but be funny in the right way.

In what Holmes referred to as an “interesting experiment with the subjectivity of comedy,” Pete is forced to realize that good comedy isn’t as easy as making people laugh. After performing in New York comedy clubs for a long time, Pete shifted to a college tour performing for young students and sometimes their parents across the country. Because of this, he was forced to change his material to reach, and not offend, as many people in the audience as possible.

This eventually leads to the season premiere and Pete’s audition at the Cellar, where he has a good show, but not a great one. This was an important moment for Pete and an important one for Holmes to convey about stand-up comedy in general.

“There’s something that clicks in a comedian when they realize that it’s not really about the words, it’s about sharing your presence and sharing your ‘there-ness’ with the audience and being funny,” Holmes said. “At a certain point maybe five or six years in, you start to realize that it’s not really about the jokes it’s about using the jokes to communicate your natural humor. And that’s a hard lesson to learn and it’s a lesson you can only learn by doing it over and over.

Most importantly, “Crashing” aims to show and organic and honest depiction of what the process of becoming a stand-up comedian is like. This includes highlighting some of the less attractive features of comedy including the inevitability of bombing on stage and feeling unqualified in the position. While not necessarily what we usually see, these aspects of comedy are crucial to determining if the career is really right for you.

“It sucks. Comedy sucks so much. It’s so hard,” Holmes said laughing. “And that’s why I wanted to make a TV show about it and if people watch it and go ‘that doesn’t look like it sucks too much for me to not do it’ then that’s probably a good sign that they should do it.”

This notion of continuously doing comedy, perfecting that craft through practice and dedication has been at the core of “Crashing” since its inception. The idea of quitting is never brought up even as we watch Pete lose his wife and life as he knew it in the series premiere. Throwing in the towel is never pondered even after we cringe when Pete bombs on stage for the tenth time. No matter what, Pete believes in himself prompting the audience to believe in him just the same. And when they don’t, Pete believes enough for all of us.

“The main message that I’m wanted to share with other comedians but also just anybody that’s trying to pursue any dream is a message of solidarity,” he said. “If it’s really difficult and you’re scared and uncomfortable and you want to quit, that actually means you’re doing it right.”