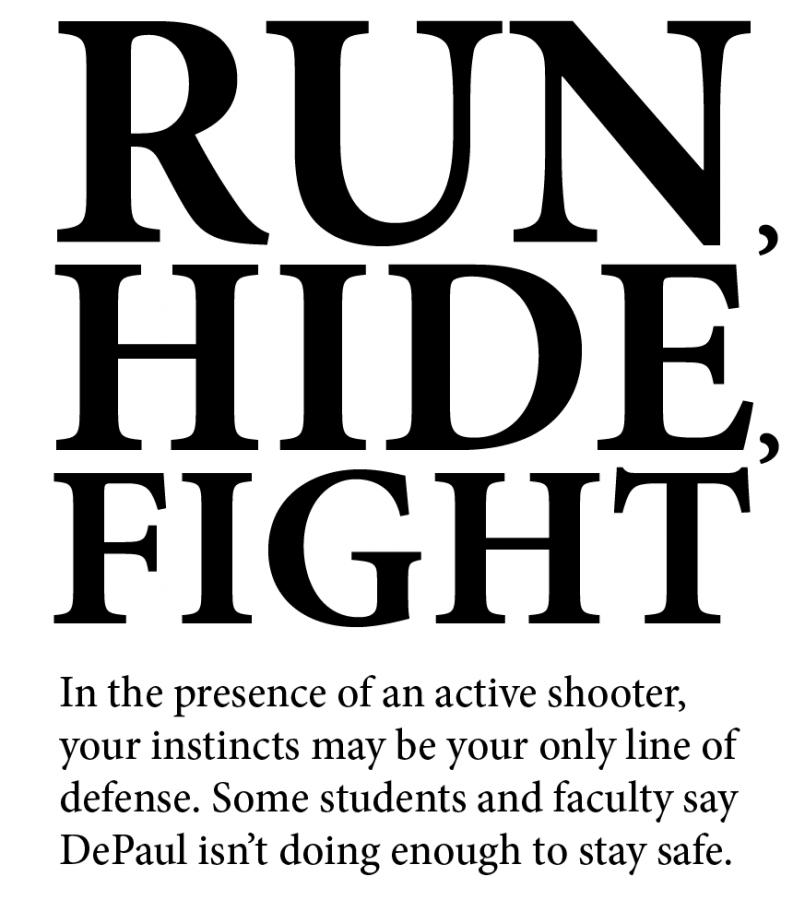 Since the mass shooting that killed 17 people at Marjory Stoneman Douglas High School in Parkland, Florida one year ago, schools across the country have been staging drills and training students, faculty and staff to prepare for such rare, but deadly events. Fifty-two of the nation’s mass shootings since 2000 have taken place at schools, including college campuses. And at DePaul, some are wondering if a written plan, doorstops and Powerpoint presentations are enough to prepare for an emergency or active shooter incident.

In the “active shooter” section of DePaul’s emergency plan website, a familiar series of recommended actions are laid out for students and faculty to follow: run, hide, fight. This advice recommends running from the threat, if it’s safe to do so; hiding in place if a path of escape is not available; and fighting as a last resort, which involves throwing items like “chairs, fire extinguishers, coffee mugs, etc.” to incapacitate the attacker. A video on DePaul’s website produced by the Center for Personal Protection and Safety, which is not mandatory for students or faculty to view, further illustrates this strategy.

Metal doorstops are also available for faculty to use in various classrooms. In the event of an active shooter or lockdown situation, in which the school campus is made to be one large “safe room,” the metal wedges, or locking handles, are to be inserted into metal slots in the floor and door. When in place, the door is unable to be opened from the outside.

Before any of this, though, DePaul’s guidelines tell students and staff to call 9-1-1 — not the university’s own Public Safety office. That call, the website says, should be made second, perhaps because DePaul’s security staff members don’t carry guns or hold police arrest powers.

DePaul’s public safety officers are not sworn, armed officers. The Public Safety Office is staffed with some 75 full-time officers along with some part-time officers, according to Public Safety Director Robert Wachowski. He says that in the event of an emergency or active shooter situation, their role is to work with local law enforcement and first responders.

“Public Safety officers know the campus, the buildings, faculty and staff,” he said via email. “If there is an emergency on campus, or a crime, they work with first responders — whether CPD or the fire department or federal officers — to gain access into buildings

and to familiarize them with the campus. Our Public Safety officers are the eyes and ears of the campus to assist first responders.”

Among big private universities, DePaul is a clear outlier in not arming its security force or requiring employees to be sworn police officers.  According to the Federal Bureau of Justice Statistics, 74 percent of private colleges with an enrollment of 15,000 students or more use sworn officers and most of them are armed. DePaul is the nation’s largest Catholic school and has an enrollment of more than 20,000 students yet does not employ sworn officers authorized to carry guns. Other area private universities, including Northwestern and the University of Chicago, do provide armed university police.

While noting that public safety officers at DePaul are “conduits” to other emergency responders and “support networks,” Wachowski also pointed out that officers’ patrols of both the Loop and Lincoln Park campuses may act as a deterrent to crime.

The Illinois Emergency Management Agency encourages universities and colleges to have a plan in the event of an emergency. Colleges and universities that have joined the state’s voluntary information-sharing program include the University of Illinois at Urbana-Champaign, Elgin Community College and Richland Community College.

The National Center for Campus Public Safety (NCCP), an organization established in 2013, has connected with universities and colleges as well as other similar organizations to coordinate communication on improving the state of campus public safety.

According to Kim Richmond, the director for the NCCP, the campus safety procedures are reflective of the individual college or university campus.

“Every campus is unique in its culture, resources and geography. Therefore, the mission and  role of public safety on each campus is going to be different,” she said.

Additionally, the response of campus safety for individual college and university campuses partly depends on what types of emergencies or crimes they commonly encounter.

“Some campus populations are very receptive and some are not. It also depends on what type of situations they are asked to respond to,” Richmond said. “If they are responding to incidents that police officers respond to, they should have the necessary tools to enforce the law. If their duty is to observe and report, then weapons would not be necessary.”

Northern Illinois University in Dekalb, for instance, has sworn officers who can investigate crimes and, according the university’s 2018 “Annual Safety and Security Report,” are or will be certified as Emergency Medical Technicians — a fact that “was an important factor during the immediate response to Cole Hall” according to a 2009 NIU document reviewing the university’s response to the Feb. 14, 2008 shooting that killed five people and wounded 14 others. The same document states that while “a need has not been identified for wholesale or sweeping reforms,” the university would seek to implement a Crisis Response Team, a new campus-wide alert system, additional emergency hotlines and more mental and psychological health services.

DePaul does have some similar security alert measures in place, including university counseling services, message boards in classrooms, PA speakers inside and outside of buildings and “DPU Alerts” that go out via text, voice and email, according to Wachowski.

“We do test alerts several times a year and remind students, faculty and staff to use Campus Connect to update, if necessary, their email address and phone numbers,” he said. “We also have the capability to activate messages on social media and on the home page of the university website.”

Still, some students at other Chicago-area college campuses said they feel safer with armed police.

“I did feel a little bit safer knowing that there is a police department close by to the school,” said Justin Hang, a junior at the University of Illinois at Chicago. “The officers at that department are always around campus and are easily available when help is needed.”

The UIC police department has a section on its website regarding any “shots fired” incident. Hang said he finds the website and other resources on campus “very useful.”

“Not a lot of people know what to do in those type of situations,” he said. “Having officers around on campus at different locations can give off that safety that students needs.”

At DePaul, sophomore Maggie Corcoran also said she’d feel safer if Public Safety officers were armed. In 2018, Corcoran’s apartment, near the Ray Meyer fitness center, was broken into while her roommate was still home. The perpetrator has not been caught. She dealt with both Chicago police and DePaul Public Safety, and she said she is not satisfied with the amount of time it takes for Public Safety to arrive.

“They take way too long to respond to incidents, sometimes as much as 20 minutes,” she said. “And working here [at the Ray] we can’t be waiting around that long if we have an injured patron who needs medical help.”

Brenna Barry, a 21-year-old junior at DePaul, disagrees. She said improved training on the part of public safety officers would make her feel safer instead. “I don’t think that having armed security would solve any issues,” she said. “I think in order to improve they can work on their reaction time in coming to situations sooner or do better with checking in on students walking late at night instead of just driving past.”

Magdalene Halikias, a DePaul sophomore, said she currently feels safe with unarmed campus security but would like to see more information regarding emergency procedures disseminated to students. She also said she’d feel “more safe if campus security was armed, in case there was a life threatening emergency.”

“I think DePaul does a good job of keeping the student body informed of what’s going on when an emergency occurs near or around campus, but I am not really aware of what procedure to follow if I did find myself in an emergency,” she said. “So I think it would be helpful if DePaul was more informative regarding procedural issues.”

According to university spokesperson Carol Hughes, the university’s public safety officers receive training for a “for a variety of scenarios to handle emergency situations on campus, including active shooter, bomb threat, civil disturbance, criminal activity, lockdown, sexual and relationship violence, suspicious mail or packages, and threats of violence.”

[Public safety officers] take way too long to respond to incidents, sometimes as much as 20 minutes. And working here [at the Ray] we can’t be waiting around that long if we have an injured patron who needs medical help.”

Ultimately, Wachowski says having unarmed officers who work closely with local responders like the Chicago Police Department is a model that works for DePaul’s open campus, big city environment.

“Our buildings are no more dangerous than other locations throughout the city,” he said. “That is why we often remind students, faculty and staff to stay on alert when walking, biking, driving and commuting.

“Each of us needs to have a plan. Most children in the U.S. start learning about having a plan to hide, run, fight, when they are in elementary school. The importance of knowing your surroundings – whether on the train, in a bus, walking in Lincoln Park or studying on campus – is critical in today’s world.”

Rick Brown, a DePaul journalism professor believes that while the precautions the university has in place are a good start, there is more that could be done (Brown is also the faculty advisor to the student-produced online news show Good Day DePaul, which did a segment on DePaul safety procedures last year). Like other faculty in the College of Communication, Brown attended a Department of Public Safety presentation on active shooters in April 2018.

“I have no problem with how they provide this instruction about what you should do when they’re already in the building,” he said. “But once they’re in the building, even though all the precautions they talk about are good, in many cases they’re not going to work if a guy’s got a gun and he’s in the building.”

Brown mentioned metal detectors, ID checks at school entrances and removing glass walls and windows — on the 11th floor in particular — as areas the university should look into. While acknowledging that some changes, like metal detectors, might be expensive, Brown said they’re at least worth thinking about.

“I think everything they do now for the most part is what you do if the guy is already there,” he said. “And some if it has some value, like try to get to an entrance and get out, get under a table, but I mean we saw at the shooting at the newspaper in Annapolis, Maryland last summer … the guy shot his way through a glass door into the newsroom.”

When asked about whether bullet resistant glass had ever been considered for DePaul classrooms or buildings, as it has been recently at high schools in Glenview and St. Charles, Hughes responded that Wachowski was too busy to answer any more questions for this story.

Ultimately, Brown said the Public Safety presentation was helpful, but did not answer his doubts about better security to keep outsiders from gaining easy access to buildings on campus.