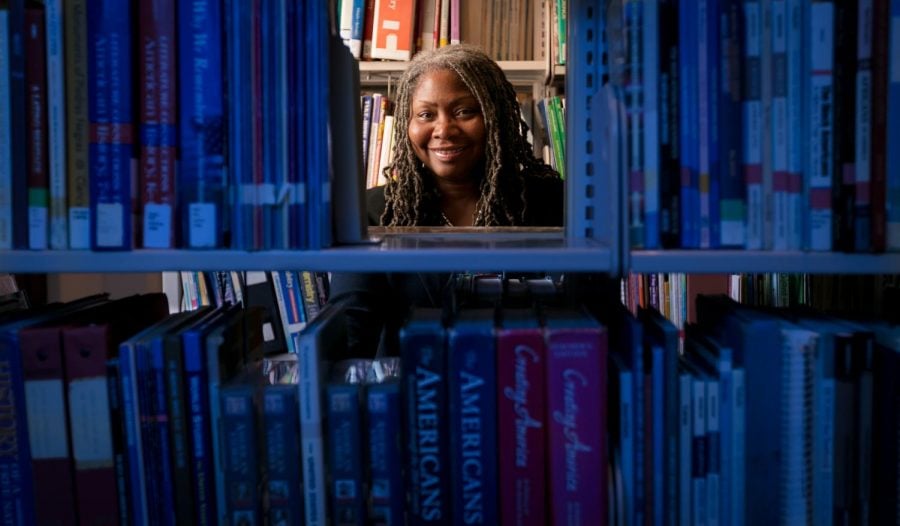 FILE-DePaul political science professor Valerie Johnson combines her academic prowess with her dedication to social justice to bring reform to DePaul from the inside.

DePaul professor Valerie Johnson is, in one word, a presence. She commands a room at five-feet-six-inches with a force that paints her as at least six-feet-three-inches.

Her presence, however, comes from a place of altruism.

Johnson, a political science professor at DePaul, is comprehensively an advocate. She has a reputation for being an inconvenience to power structures by asking hard questions and holding those in authority accountable. But she doesn’t do it for herself, instead focusing on those who don’t have a seat at the table.

“Advocacy is about recognizing that some people are powerless and using your voice to help,” she said.

Johnson has had a notable career in academia and politics. It became clear in an interview on Feb. 11, however, that she’s most notable for her advocacy, a tenet she adheres to in everything she is and does.

Her office is an endearing mess, with books scattered everywhere and a jelly bean dispenser at the center of her desk.

These is a clear indication of who she is: intensely academic without sacrificing character.

“Please excuse me for sweating – I’m drinking matcha tea,” she said, in between anecdotes about dealing with the intense racial and economic disparities between suburban and urban school systems.

Johnson has been an associate professor at DePaul for almost 16 years. She’s the chair of the political science department, specializing in urban politics, public policy and the politics of race.

She grew up in Buffalo, New York to working class parents who stressed education and celebrated social justice. She cites her father’s labor activism at the steel mill where he worked as inspiration for her career. His involvement with the union gave Johnson a familiarity with advocacy at a young age.

Johnson became the national education spokesperson for the Rev. Jesse L. Jackson Sr. and his Rainbow/ PUSH Coalition, a nonprofit social justice organization, in 1997. There, her main job was, of course, advocacy.

Though she didn’t work for Jackson long, only four years, the time was impactful.

As the national education spokesperson, she traveled around the country challenging disparities in school funding.

“It’s a snoozefest to explain and not really a sexy topic, but really important stuff,” she said. “We gave a lot of people really necessary legal assistance.”

Proof of this assistance is just a Google click away. In Decatur County in 1999, six African-American students were expelled for two years for a 19-second fight at a football game. All six, even the victim, were subject to two years of suspension and some of them were seniors.

“I talked to the superintendent and the president of the board of education to appeal to them that there was no societal advantage to expelling kids for two years,” she said. “Essentially asking, what will that accomplish?”

The work, however, she found discouraging.

“I found that the more minority kids, the more expulsions and suspensions,” she said. “There was a direct correlation […] and that was disheartening.”

Despite these demoralizing setbacks, Johnson has remained vigilant as an agent for change. At DePaul, she’s known as a strong proponent of diversity and one of the most outspoken faculty members. “You can be silent, or you can use your voice to make a difference,” she said. “For better or for worse.”

The worse, as she describes it, comes in many forms. For one, she feels alienated by upper-level DePaul administration. She felt this alienation was exemplified at the annual State of DePaul address for faculty and staff at the Holtschneider Performance Center. When the event was opened up for questions, Johnson quickly stood up, asking questions about what DePaul was going to do about the racial climate on campus.

“They were immediately like, ‘Professor Johnson, can you please wrap it up,’” she said, laughing. “They think I’m too extra.”

“[DePaul administration] is like ‘oh, let’s have a MLK event,’” she said. “And I’m like ‘No, let’s change the processes and structures to ensure that diverse groups are able to matriculate and thrive here.’”

“Oh! I made up a little data sheet for this,” she said, jumping out of her chair to print a copy from her computer.

She cited the consequences of her outspoken nature in instances like not getting considered for the university’s new Diversity Fellows program, where professors would be released from their classes to focus on diversity initiatives at DePaul.

You can be silent or you can use your voice to make a difference. For better or for worse.”

With her background, Johnson is uniquely qualified and, despite having glowing recommendations and a reputation for prioritizing inclusion, she was not even a finalist for the program, she said.

“It’s a powerful lesson of how you can piss people off at the top,” she said. “The very people who are the so-called advocates marginalize you, and that goes to show you can be alienated when you speak your truth.”

Though she claims to attract negative attention from her higher-ups, Johnson is popular amongst her colleagues.

Molly Andolina, the associate chair of the political science department who works alongside Johnson, was more than willing to comment on Johnson’s character.

“[Johnson] is strong-willed and has a deep and abiding commitment to values of equity and justice and they structure where she puts her time and energy, which is always to causes that are bigger than herself,” Andolina said.

This is mirrored in her teaching. Johnson is recognized for connecting and advocating for students on a personal level.

When a black male student came to her after being racially profiled on DePaul’s Lincoln Park campus a few years ago, she made it her duty to address the racial prejudice in treatment by security officers. She spoke to the president, and ultimately the university began mandating diversity training for all DePaul security officers.

“She levels the playing field with her students,” Timmy Arnold, a DePaul student, said of Johnson. “She treats them as equals.”

Johnson is not concerned about her standing amongst administrators at the university, her chief concern is with equity, and this trend has been consistent throughout her 57 years.

“We look at each influential moment in life as a chapter,” she said. “If there was a defining trend [in my life], it would be activism.”