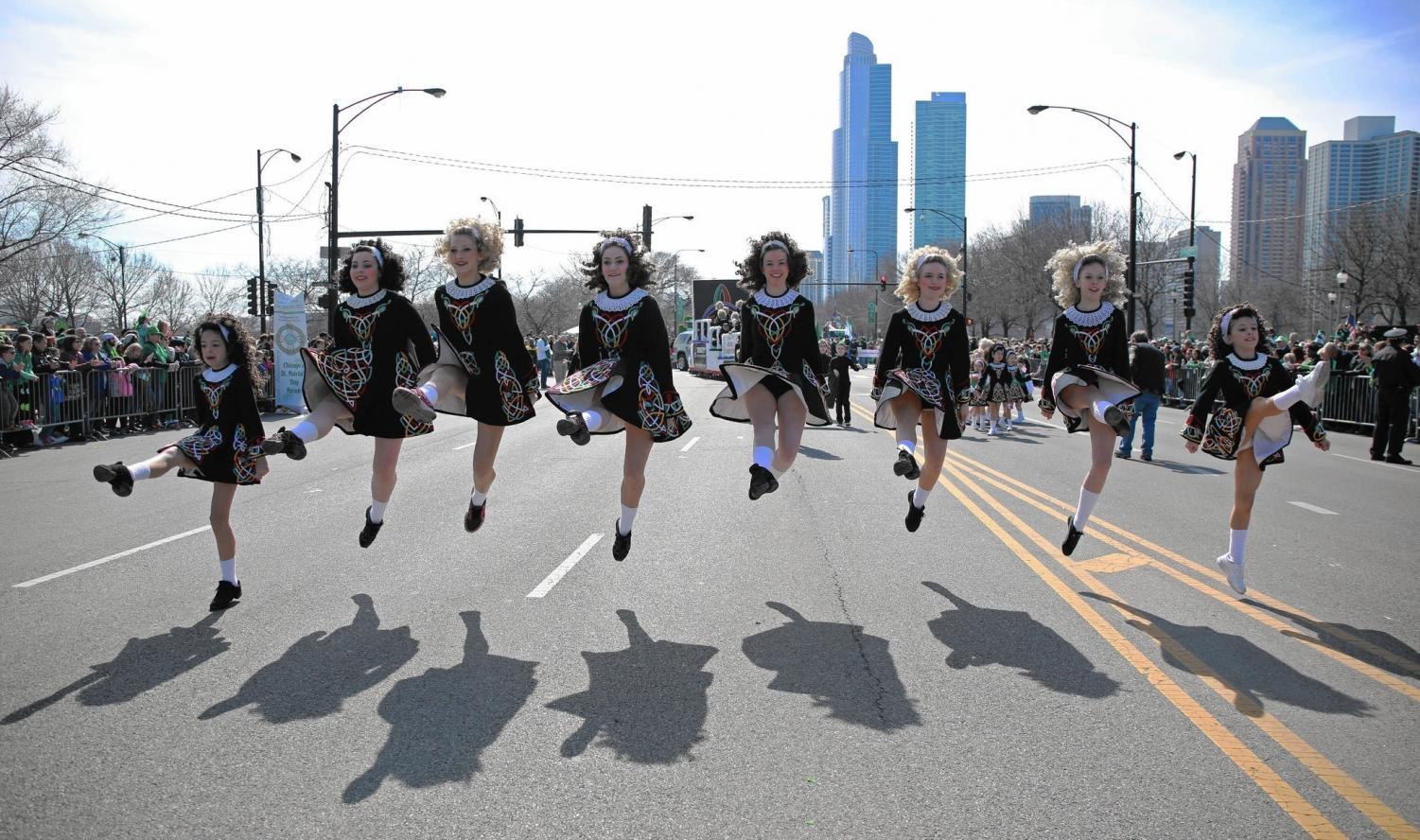 The Trinity Irish Dancers, shown at 2015's St. Patrick's Day Parade on South Columbus Drive in Chicago, are returning this year for that engagement and dozens of others. (John J. Kim | Chicago Tribune)

The Trinity Irish Dancers, shown at 2015's St. Patrick's Day Parade on South Columbus Drive in Chicago, are returning this year for that engagement and dozens of others.

Looking back at the city’s Irish roots

If you go to DePaul or have ever lived on or near the Lincoln Park campus, there is a chance that you have stopped in Kelly’s Pub or McGee’s.

Like many traditional Irish bars, Kelly’s is named after the family who opened the establishment. Both Kelly’s and McGee’s are filled with traditional Irish decor such as dark wooden tables, barstools or Guinness signage.

There are hundreds of Irish pubs throughout the Chicago area, but Chicago’s Irish prevalence is beyond a barstool.

St. Patrick’s Day can be seen as a holiday where it is an obligation to celebrate with consuming alcohol. People of Irish ancestry may partake in these activities, but there is more to the holiday than drinking beer with your best friends. Chicago has a rich history when it comes to Irish ethnicity.

Throughout Chicago’s history, immigrants have played an integral role in the city’s economic, social and political development. Mary McCain, Director of Irish Studies at DePaul, said Irish immigrants and their descendants have contributed to the city from its start.

“In the 1830s, Irish laborers were key to the construction of the Illinois-Michigan Canal, which connected Lake Michigan to the Illinois River, and therefore to the Mississippi River,” McCain said. “This gave Chicago a bigger economic role in the region and in the nation.”

Over time, men from Irish families became involved in other professions.

“Young men from Irish families moved quickly into the building trades, the police force, and the fire department,” McCain said.

Being a part of the city’s powerful government institutions allowed the Irish to gain prominence in Chicago, especially in politics.

“Probably anyone who knows anything about Chicago knows about the role of the Irish in city politics, particularly in Democratic machine politics. But they were active and effective even before the machine was fully built,” McCain said. “About a dozen of Chicago’s mayors have had Irish ancestry. Richard J. Daley and his son, Richard M. Daley, are the most famous and also served longest in office, but there were many others, including Jane Byrne, the city’s first female mayor.”

So, when did St. Patrick’s Day parades originate in Chicago and why?

“At least two things motivated Irish immigrants and their families to do this. In that period, Irish immigrants were not especially liked or respected by the elites in big American cities,” McCain said. “The parades were simultaneously one way for the Irish to encourage each other to stay true to their Catholic faith, Irish traditions and a visible sign to others in Chicago that the Irish were, in fact, making positive contributions to the city.”

In today’s society, Chicago’s famous downtown St. Patrick’s Day parades serve as the most symbolic day for the Irish in Chicago. Other than the famous downtown parade, there are a couple of other parades Chicagoans attend to celebrate the holiday.

On the Southwest Side of the city, the South Side Irish Parade takes place every year. The parade’s route begins at 103rd and Western and participants march south to 115th and Western, where the parade ends. Each year, the event hosts 10,000 marchers and 200,000 spectators, according to the parade’s press release.

Another notable parade takes place on the Northwest Side. The Northwest Side Irish Parade was introduced in 2003. The parade is a celebration of faith, family and heritage in the respective community. Over the past 11 years, the parade has raised money and awareness for charities such as Misericordia and muscular dystrophy, according to the parade’s website.

Parades are not the only way the Irish spread their love for their heritage in the city.

One non-profit organization that spreads Irish culture full time is the Irish American Heritage Center. Kathy O’Neill, a public relations manager at the center, said the organization host events year-round to celebrate not only Irish culture, but other cultures as well.

“We team up with other cultural centers to showcase our shared, as well as different cultures, values and traditions,” O’Neill said.

“We have more that 200 events per year—from book signings, to large-scale festivals with as many as 15,000 attendees,” O’Neill said.

Throughout the city, some will say they have his or her own Irish connection —most of which may be because of a bar. Brian Mallon, a 2015 DePaul graduate, said most students and young professionals experience this.

“Everyone has their own Irish connection. Every person in the city has their one Irish bar or restaurant that they always go to,” Mallon said. “Whether it’s Kelly’s by DePaul, O’Fegan’s in West Loop, or Cork & Kerry in Beverly. Whether you’re Irish or not, you always will have your special Irish bar. With that, everyone has a tie to Irish culture, even if it’s just a bar.”

As the month of March continues, Chicagoans prepare to see the Chicago River transform into a green waterway.  The city will prepare for thousands to flood the streets of downtown to celebrate St. Patrick’s Day. Whether someone is Irish or not, the entire city of Chicago will seem to be Irish on March 16.

CORRECTION: A previous version of this article quoted Mary McCain, Director of Irish Studies at DePaul, as saying “more than a dozen” of Chicago’s mayors have been Irish, when her quote was actually “about a dozen.” The story has been changed for clarity.