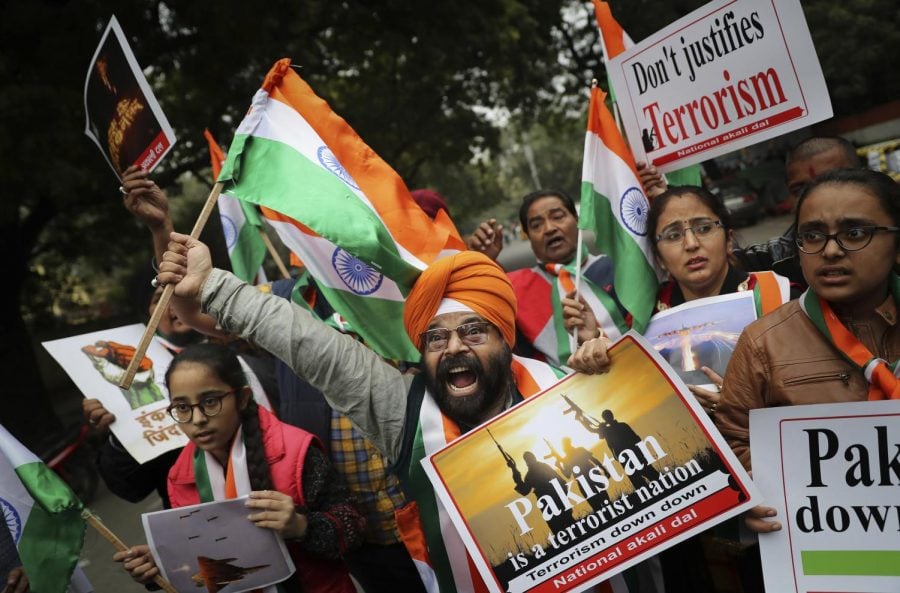 A National Akali Dal leader shouts slogans in support of India and against Pakistan as he celebrates reports of Indian aircrafts bombing Pakistan territory, in New Delhi, India, Tuesday, Feb. 26, 2019.

While many around the world were celebrating Valentine’s day on Feb. 14, 40 members of the Indian Central Reserve Police forces were attacked and killed in Lethpora in the Pulwama district, which lies on the Indian-administered side of the disputed Kashmir region.

The suicide attack was claimed by Pakistan-based militant group Jaish-e-Mohammed. Pakistan denied any involvement in the attack, though India immediately blamed Pakistan, accusing it of supporting the group.

The Pulwama attack is the deadliest terror attack on India’s state security personnel in Kashmir since 1989. Tensions between the nuclear-powered neighbors date back decades, according to DePaul professor Rajit Mazumder, who specializes in South Asian history.

He said that in 1947, when India became free from British rule and the modern state of Pakistan was established in 1947, there were three pieces of land that were not clearly demarcated in either India or Pakistan. One of these was Kashmir.

“The problem with Kashmir was that it was a kingdom with a Hindu king but primarily Muslim population,” Mazumder said. “In 1947 when India became independent, the ruler of Kashmir has not decided whether he would side with India or Pakistan.”

DePaul international studies professor Shailja Sharma agreed, noting that 1947 was also the year when the Maharaja of Jammu and Kashmir refused to accede to either India or Pakistan.

“When tribal warriors from Pakistan invaded Kashmir in 1947-48, he quickly acceded to India,” he said. “But since Kashmir is a Muslim-majority state, this has been a state that is claimed by both Pakistan and India. Territorially, it is also divided between the two countries by the ‘Line of Control,’ which is not an internationally recognized border.”

After the Pulwama attack, a series of gun battles between Indian security forces and militants ensued until Feb. 26, when 12 Mirage 2000 jets from the Indian Air Force crossed the Line of Control and dropped bombs into Balakot, Pakistan. Islamabad claimed that their own jets intercepted the IAF, forcing them to hastily drop their payloads before returning to India.

The next day, Feb. 27, the Pakistani Air Force conducted a retaliatory airstrike into Jammu and Kashmir in retaliation.In an ensuing dogfight between Indian and Pakistani jets, an Indian MiG-21 was shot down over Pakistan, where that country’s forces then captured Indian pilot Abhinandan Varthaman.

Varthaman’s capture drew international headlines and rose tensions to their highest levels since the Feb. 14 suicide attack. As Pakistan closed off its airspace and India closed at least eight airports of its own, countries such as the U.S., UK and Russia appealed for calm.

Social media, meanwhile, quickly elevated Varthaman to icon status; many users called him a hero and prayed for his safe return, while Indian movie producers registered film ideas for anticipated dramatizations of his story.

On Feb. 28, Prime Minister of Pakistan Imran Khan announced at a joint sitting of parliament that the government had decided to release the pilot the next day as a “gesture of peace.”

But Sharma, of DePaul’s international studies department, said the core issues surrounding conflict haven’t gone away and are at risk of igniting once again.

“There is no peace treaty, as this is a low-intensity conflict between two nuclear-armed countries. It remains dangerous,” Sharma said.

And while New Delhi has stated that India is united against terrorism, Sashwatha Sridhar, a public relations and advertising graduate student at DePaul who herself is from India, feels that it is important to remember that whoever wins the war, ordinary people always lose. She also feels that making films on military incidents, such as the popular Bollywood war film “Uri: Surgical Strike” released in January that dramatizes a 2016 conflict in Kashmir, only mislead the audience instead of educating them.

“With Bollywood producers eager to turn these surgical strikes into … film projects romanticizing the bravery and sacrifice, a misguided audience is supporting war rather aggressively on social media. Which is really sad,” Sridhar said. 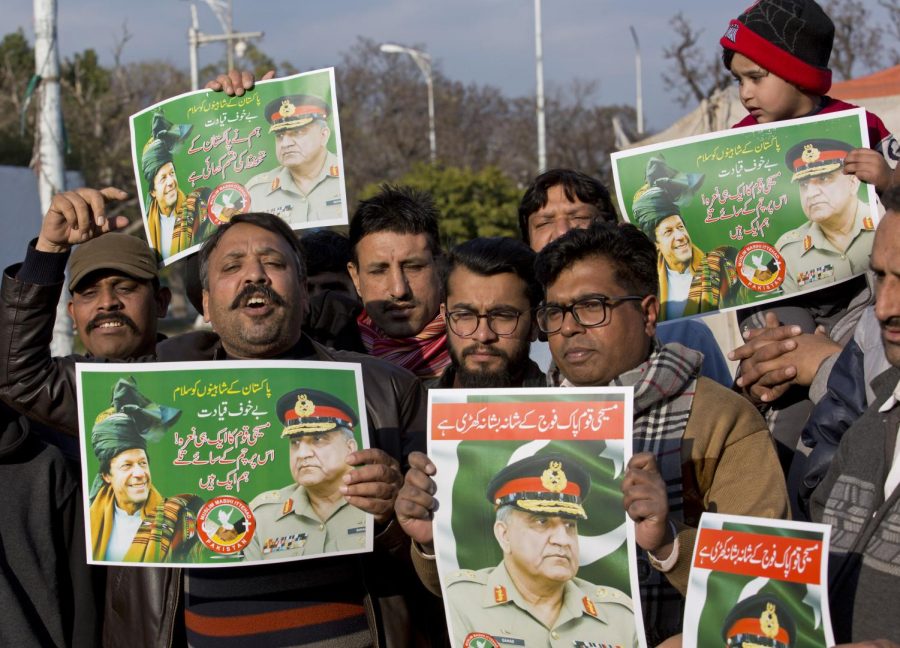 An escalation that could threaten nuclear exchange over the disputed province of Kashmir resurfaced this week as India and Pakistan added to the history of their violent rivalry.

The conflict reignited on Feb. 14 when a suicide bomber from the separatist group Jaish-e Mohammed killed 40 Indian paramilitary soldiers. The terrorist attack occurred during a training exercise in the contested  region of Kashmir that borders both India and Pakistan.

India retaliated two weeks later by bombing what it stated were terrorist training camps on the Pakistan side of the border. Pakistan retaliated with its own airstrikes, which grew into dogfights between jets that resulted in the capture of an Indian pilot after being shot down by the Pakistan military.  The pilot was returned in a highly publicized exchange between the two rivals, but tensions remain strained. The stakes are especially high because the two countries have nuclear capabilities, and this incident is the most violent confrontation in decades.

“This is kind of a level of escalation we haven’t seen in the past,”  DePaul political science professor Scott Hibbard said. “Not just throwing artillery shells across the line of control — this is Indian jets bombing Pakistan and that’s a really dangerous escalation.”

The origin of the conflict can be traced back to the partition of India and Pakistan by Britain in 1947. The borders were intended to shape the Muslim state of Pakistan and keep India predominantly Hindu.  The Hindu leader of the Muslim-majority border province Kashmir opted to join India instead of Pakistan, sparking the first of three wars over the territory. The stakes of the standoff were raised after both countries became nuclear-capable in the 1990s.

Resolution for the Kashmiri population that sees them joining Pakistan or becoming independent is difficult because it has become a symbol of national pride for both countries. There have also been complaints of high unemployment, human rights abuses perpetrated by security forces and violence spilling over from battles with insurgent militia groups.

These insurgent groups have had a history of being backed by Pakistani intelligence services, though the Pakistani government has repeatedly denied these claims and there is no evidence to link Pakistan to the most recent bombing. This support of militant organizations has to do with Pakistan’s past of not being able to win an outright war against India, according to Hibbard.

“(They) are trying to do everything they can to make life increasingly difficult for India in Kashmir as a way of furthering their strategic interests and putting pressure on India to either stay out of Afghanistan, or stay out of Pakistan or stay out of Kashmir,” he said.

The leadership of both countries also plays a role in continuing the conflict. Populist Prime Minister Imran Khan was recently elected in Pakistan and has been pursuing hardline policies that include his stance on Kashmir. Indian Prime Minister Narendra Modi is a Hindu Nationalist who faces an upcoming reelection and has been capitalizing on the recent border crisis.

Dr. Kalyani Menon is a professor at DePaul who focuses on South Asian culture and religion and says that the conflict in Kashmir has provided an opportunity for Modi before the election.  Modi’s government is on the defensive after being implicated in corruption scandals and faced with a report showing rising unemployment levels.

“In this context, the conflagration in Kashmir changes the narrative and Narendra Modi would like to use it to project himself as a strong leader who acted decisively after an attack,” Menon said.

“Historically, if such a conflict occurred the U.S. would probably act a mediator,” said William Denton, a professor at DePaul who focuses on American foreign policy.  “That does not seem to be the case now.”

A sustained struggle between India and Pakistan would risk drawing China in as a participant. It could also become difficult for the United States to deal with terrorist groups in the Northwest tribal territories of Afghanistan and Pakistan, which it has done with the cooperation and permission of the Pakistani government.

“A conflict would distract from this effort,” Denton said.

Although the fighting over Kashmir has cooled down for now, the underlying rivalry and history over Kashmir remain unresolved and the threat of escalation remains.