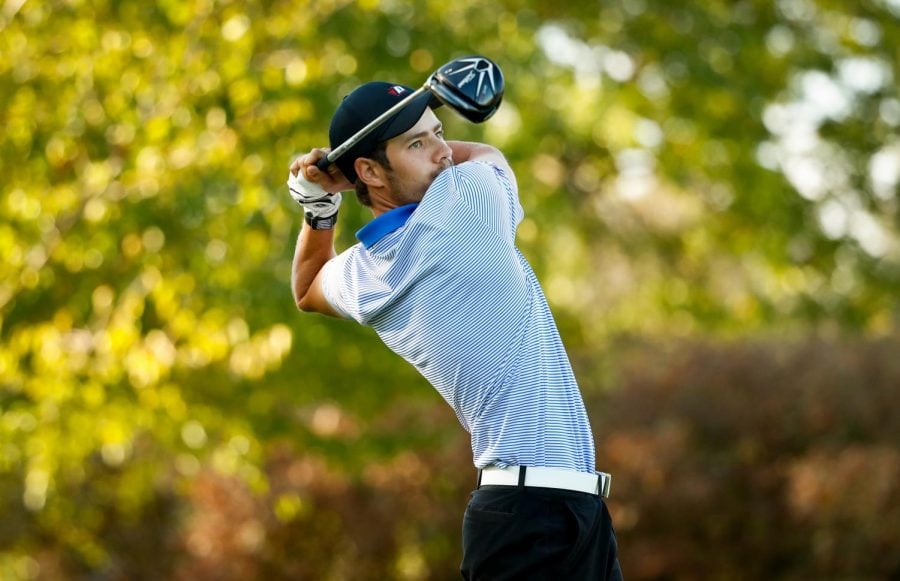 Senior golfer Bobby Thomas swings away during the Fighting Irish Classic in October, 2017. Thomas finished the tournament with a total score of 223.

Twins are often asked the same questions over and over. Are you identical? Who is older? How can people tell you apart? Where is your twin now? That last question is pretty easy for the Thomas twins. Freddy Thomas was born just 11 minutes before his twin, Bobby, on Aug. 21, 1995. Since then they have stayed together through high school, college and into the workplace. They have stuck together playing the sport they love, golf.

“Both of us wanted to win everything if the other was competing,” Freddy said. “It was true whether we were taking a test in school or playing a round of golf. I hated to lose to him and I know he hated to lose to me.”

Like most sets of twins, you hate to lose but it is even worse when you lose to your twin.

Bobby went a little more extreme when asked about competitiveness between him and his brother jokingly saying, “Yeah we wanted to kill each other. Like 24/7. But that helped push us to be better golfers in the end.”

They ended up pushing each other to be good enough in high school for colleges to take notice of the Thomas twins of Lakeville, Minnesota.

When DePaul University came calling, it was hard for the twins to turn down the offer.

When going to the same place together, many twins run into a similar problem: everyone getting mixed up which twin is which. Marty Schiene, the head coach of the DePaul Men’s golf team, had trouble right away,

“At first I couldn’t tell them apart,” he said. “But then after a while, it was very evident who Bobby was and who Freddy was.”

The Thomas twins are used to the confusion but they said people who know them tend to figure it out sooner or later.

“For the most part, we look pretty different,” Bobby said. “I like to work out a little more than Freddy so I’m a little bulkier.”

After four years at DePaul, Freddy graduated in 2018 and began a job at Plante Moran, an accounting firm. However, Bobby has stayed an extra year to do the combined bachelors and masters degree program. This means for the first time in their lives, they aren’t playing golf together.

“It weird because he isn’t playing as much anymore,” Bobby said. “It makes it hard to compete against him now because it isn’t much of a competition.”

When they play against each other now, the competitiveness is still there; however, Bobby has gotten the upper hand.

The Thomas twins don’t have to wait long to be back in a shared space. Bobby recently accepted a job at Plante Moran as well. They will be working in different lines at Plante Moran, but both of them are excited to be at the same company.

“It wasn’t planned that we would work in the same office,” Freddy said. “I liked the company and so did [Bobby]. We made our decisions independently of each other.”

The same competitive nature that they had on the golf course pushed them to be great students as well. The Thomas twins both earned Big East All-Academic team honors each year they were at DePaul University.

“They drove each other to be better,” Schiene said.

The achievements on and off the course were tied to the support that they had for each other.

“We always had someone there for support,” Bobby said. “One time when we were at the US Amateur qualifier, [Freddy] qualified and I missed by a few shots. [Freddy] supported me through that tough time and then I went out and caddied for him at the US Amateur.”

“It’s nice to have someone there I can rely on,” Freddy said.

Bobby felt the same way with his brother.

“Having [Freddy] as support through college while family was 300 miles away is the reason I kept playing college golf,” Bobby said.

Since they were born, they have stuck together through everything. Now that Freddy has moved on to the business world, Bobby is right behind him, joining his brother in the next step of life.