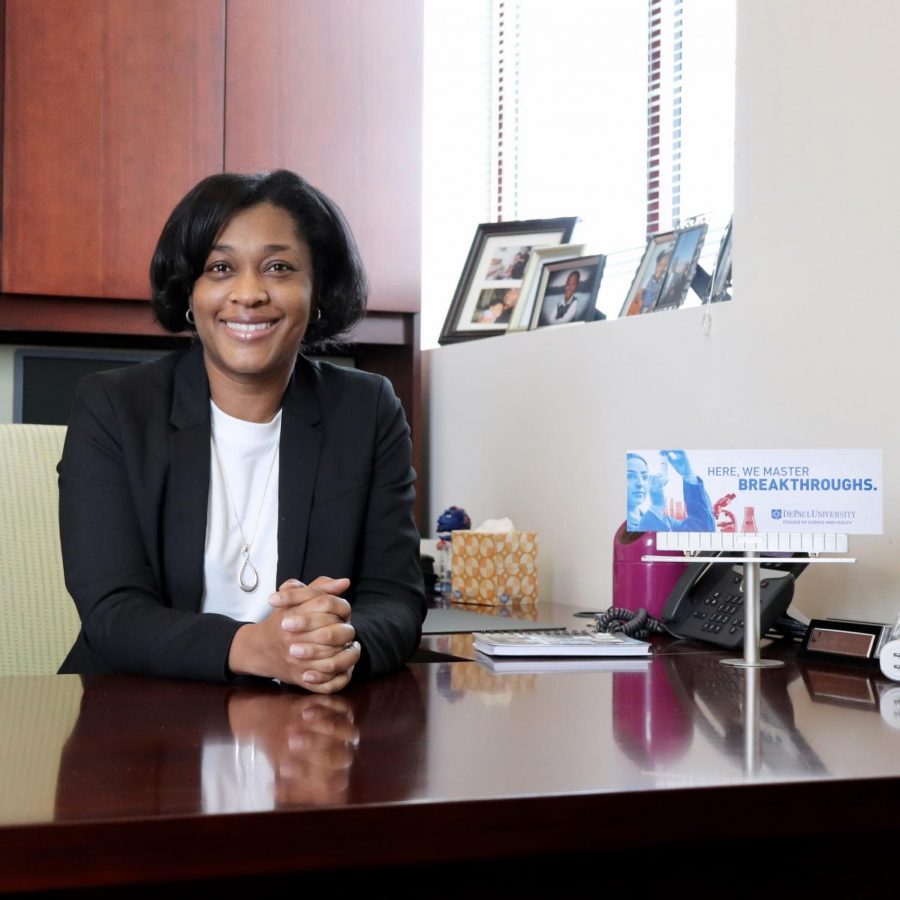 Stephanie Dance-Barnes became the dean of DePaul’s College of Science and Health during unprecedented times. With a global pandemic and a fight for racial justice, Dance-Barnes is keeping those factors under her belt while issuing her longstanding commitment of providing opportunities to students of all backgrounds.

“Throughout my career, I have been dedicated to providing opportunities,” Dance-Barnes said.

According to a press release from DePaul Newsroom, Dance-Barnes joined the community on July 1, succeeding Dorothy Kozlowski, who served as the interim dean from 2018.

Prior to coming to DePaul, she worked at Winston-Salem State University in North Carolina, serving as the interim associate provost, dean of lifelong learning for 10 years, amongst other positions. Dance-Barnes also was in charge of overseeing how students gained the tools for success through STEM and TRiO support services, advising and more.

Throughout her career, Dance-Barnes received awards and fellowships, including The University of North Carolina System Board of Governors Award for Excellence in Teaching. Though Dance-Barnes began her scientific path at Elizabeth City State University, she gained a bachelor’s degree in biology and pre-medicine. She then went on to get her doctorate at Wake Forest University School of Medicine, where she was the first Black woman to receive a doctorate in cancer biology and toxicology.  As a North Carolina native, moving to Chicago was a big step for her.

“It was a very big decision,” Dance-Barnes said on taking the position from DePaul.

Dance-Barnes was invested in her work at Winston-Salem State University, as it was a historically Black college, however DePaul’s mission of “What must be done?” resonated with her, enticing her to step into the role. Dance-Barnes said her experiences as a cancer biologist and providing academic support apply to being the dean of the college of science and health. However, she said fostering diversity in the classroom is another big step to help students develop a passion for science.

“It’s going to be very important that we think about what our faculty looks like,” Dance-Barnes said.

Having a diverse representation of faculty would help students from different backgrounds to succeed. Yet, along with representation, Dance-Barnes said the curriculum must be relevant to current events and how they will apply to scientific careers in the future. According to Newsline, Dance-Barnes received a $400,000 grant from the National Science Foundation to encourage undeserved third to fifth grade students to pursue careers in STEM. She also introduced a Women and Science program to Winston-Salem State University in 2011.

“I think it’s going to be important that once again, when looking at the curriculum, that we ensure that it’s culturally relevant,” Dance-Barnes said.

Dance-Barnes noted from her experience at Winston-Salem State University, women who were enrolled in STEM programs were highly motivated, but then dropped out post-graduation. However, like she did in North Carolina, Dance-Barnes is hoping to get students motivated for STEM careers before they head into college. Prior to her arrival, DePaul’s college of science and health received a grant worth nearly $1 million to help promote diversity in line with STEM and TRiO programs.

Aside from the grant, Dance-Barnes said it will be important to bring up today’s climate as there are individuals and situations that were put in place to lend themselves to racism. As a result, these policies and processes diminish opportunities for students of underrepresented backgrounds.

“Once students leave DePaul and graduate, they’re going out into a world that is unfortunately unfiltered and we have to make sure that we’re preparing you all to take all those challenges,” Dance-Barnes said.

Covid-19 has shown a light on health disparities across the country regarding race. According to a report from the Center For Disease Control and Prevention, communities of color have experienced increased risk for infection, severe illness and death from the virus because of long standing health and social inequities. The report also said that from June 5-18, among 79 hotspots, a disproportionate number of Covid-19 cases were from communities of color. Dance-Barnes aims to shine a light on these disparities by bridging the gap between basic sciences and health sciences.

Aside from keeping up with current trends in curriculums, Dance-Barnes has always valued researched based learning. At Winston-Salem State University, she changed the curriculum of a general biology lab from a cookbook style to a more experiential-based and inquiry form of learning, recognized by Insight into Diversity Magazine in 2017. For DePaul’s classes, she also has ideas for more research based classes, but in order for that to happen, the entire faculty would need to be on board.

“You have to have investment and ownership from everyone,”  Dance-Barnes said.

The important skills Dance-Barnes said students would gain from researched based classes are applying knowledge, critical thinking, information literacy and identifying questions. These are prevalent when entering the workforce.

However, as DePaul is a different setting from where she previously worked, Dance-Barnes acknowledged both the challenges and opportunities that arise. Yet, in the end, she said that having the opportunity to take on the position will be able to lend her experiences and grow. Though her goals, no matter where she worked, have always been the same.

“It’s always been about being student-centered and providing opportunities for our students to basically give back and to lead change,” Dance-Barnes said.

Now, with a virtual setting, these goals are being fulfilled in a whole new light. Even though meeting with colleagues all day online could be draining, Dance-Barnes said that it makes her more accessible.

“This has created the opportunity to actually meet more frequently to talk about things that are relevant, to make sure we’re constantly assessing and evaluating what’s going on because things are constantly changing,” Dance-Barnes said.

She also mentioned the faculty and staff within the college have truly risen to the occasion and strives to keep up the effective work. However, Dance-Barnes is still planning events to have as much engagement as possible, even on a remote forum.

Even though she won’t be seeing many students, faculty and staff in-person, she is hoping that they will still envision her authenticity and dedication to DePaul’s mission, while gaining their trust.

“It makes me better working with students,” Dance-Barnes said.