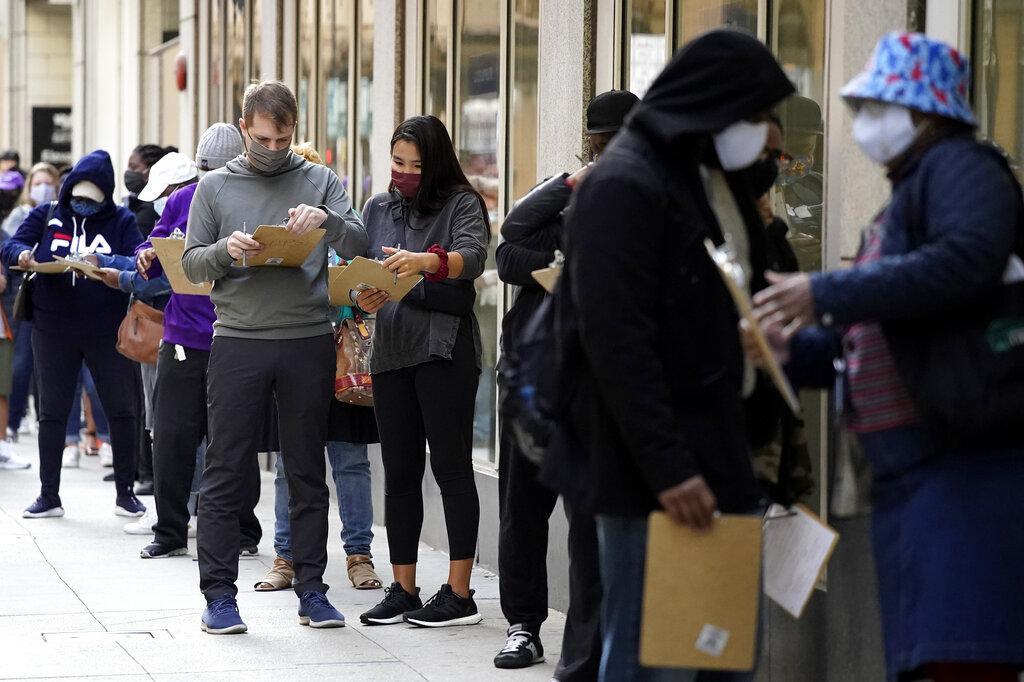 People wait line to early vote as they fill out voter registration cards outside the Loop Super Site in downtown Chicago, Sunday, Oct. 11, 2020. It is the only location allowing early voting in the city right now, but early voting will expand to locations in all 50 wards on Oct. 14. (AP Photo/Nam Y. Huh) (AP)

People wait line to early vote as they fill out voter registration cards outside the Loop Super Site in downtown Chicago, Sunday, Oct. 11, 2020. It is the only location allowing early voting in the city right now, but early voting will expand to locations in all 50 wards on Oct. 14. (AP Photo/Nam Y. Huh)

Though the presidential election is taking up the majority of attention, the ballot for Illinois voters is much more loaded than just picking between President Donald Trump and challenger Joe Biden. The ballot is full of hot button issues — and some down-ballot races that are just as heated as national choices.

Given the pandemic, mail-in voting has become more prevalent as an alternative for those who don’t want to physically go to the polls.

Polling locations will not be able to enforce voters to wear masks while inside. Despite this, other measures have been implemented to ensure the safety of those who choose to vote in-person.

“There will be social distancing, six feet between voting stations, plexiglass dividers, hand sanitizers and masks available for those who do not have,” a spokesperson from the Chicago Board of Elections told The DePaulia.

Perhaps the hottest item on the ballot is Gov. J.B. Pritzker’s proposed Graduated Income Tax Amendment — dubbed the “Fair Tax” — as it has seen stark opposition from some citizens and organizations.

This policy repeals the current law that has tax in Illinois at a flat rate of 4.95 percent and puts the power in the hands of legislators. Under this act, different levels of income will be taxed at different rates.

Based on Pritzker’s proposed spending, however, the average family in Illinois would end up owing around $3,500 in taxes under this new law.

Adam Schuster, senior director of budget and tax policy for the nonpartisan Illinois Policy Institute, said the amendment gives lawmakers “control of levying a tax on any income at any time.”

Schuster added some of the opposition also stems from trust in the states’ politicians.

Schuster said the tax will not only impact families but also small businesses.

“More than 100,000 small businesses would be damaged by this tax during a year where they are already facing hardships,” he said.

“Students must consider the future of the state of Illinois,” Schuster said. “The tax would make it harder to find a job in the state, harder to buy a home and more likely to face future tax hikes.”

Kim Foxx, who has come under fire for her handling of the Jussie Smollett case, is running for her second term against Republican Pat O’Brien and Libertarian Brian Dennehy.

The primary race for this position wound up being one of the most expensive races anywhere in the country with Bill Conway infusing the race with millions of dollars of funding from his millionaire family.

Rep. Lauren Underwood was elected in a surprising victory in 2018, unseating a longtime Republican incumbent. Her victory cemented her place in history as the first African American, the first woman and the first millennial to ever represent a district that is mostly white.

Now, state Sen. Jim Oberweis is hoping to take back the seat on behalf of state and local Republicans. The district is considered one of the true toss-ups this election.

Durbin serves at the Democratic Whip in the Senate, the party’s second highest role in the chamber, who must round up votes — a job that could have renewed importance should Democrats regain control of the Senate.

“I’d encourage kids to bring a cheat sheet,” McCarron said. “9/10ths of the ballot is going to be unfamiliar to them because it’s going to be these obscure judicial races and things like that.”