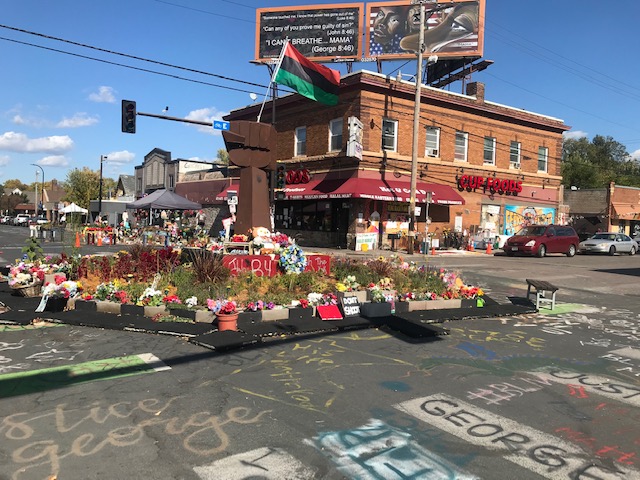 A memorial for George Floyd at Cup Foods in Minneapolis, where Floyd was arrested and killed by the police.

The aftermath of George Floyd’s death

MINNEAPOLIS—Outside the Cup Foods next to where George Floyd was killed at the knee of former Minneapolis Police Department officer Derek Chauvin on May 25, a memorial for Floyd is still flourishing in the middle of the intersection of 38th and Chicago Avenue in Minneapolis. Fresh flowers, words of grief and exquisite murals line the street. However, since July, the protests against police brutality have slowly been dwindling here in Minneapolis and throughout the country.

As the noise of the looming election has picked up, some residents in Minneapolis have even felt a sense of apathy by officials and the general populous growing towards the movement for police reform and a more widespread racial equality for Black Americans.

“The fact that there have not been any changes yet leaves me not very hopeful,” said Anna, a local middle school teacher who preferred to remain anonymous. “I teach middle school and I have been hoping that by the time my students are adults there will be changes, but without even Chauvin being held accountable, the fight for change seems bleak.”

Nearly five months removed from the death of George Floyd, only 6 percent of Americans believe that policing does not need major changes, according to a recent Gallup Poll.

Yet, former Minneapolis police officer Derek Chauvin, who has been charged with second-degree murder, third-degree murder and manslaughter, was released from police custody on Oct.7 after posting the $1 million bail. While all four of the officers involved in the death of George Floyd are still currently awaiting a trial scheduled for March 2021, they are also all appealing to the presiding judge to dismiss the charges because they claim the prosecution’s evidence lacks ‘probable cause.’

Additionally, on June 7 at an event put on by the grassroots organization Black Visions Collective, nine members of the Minneapolis City Council, a veto-proof majority, committed to voting to abolish the Minneapolis Police Department as it is currently known.

Yet, the city council vote on abolishing the Minneapolis Police Department (MPD) was stalled in August by the Minneapolis Charter Commission and delayed until after the election this November, displaying how complicated the issue of abolishment is for some neighborhoods affected by high crime. 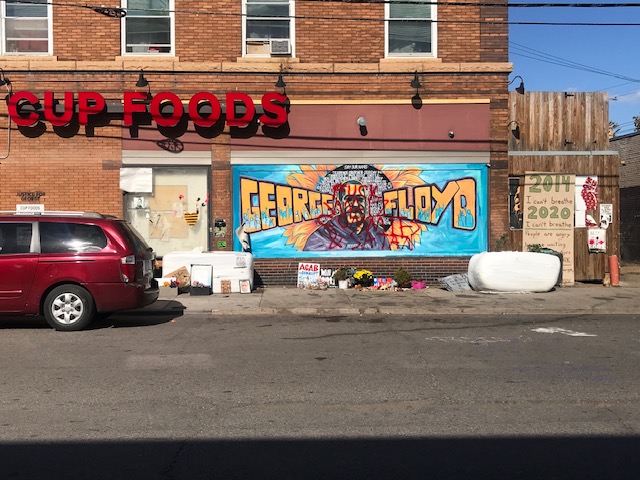 “I think police reform would look like more resources allocated to mental health assistance in communities and schools and focusing on abolishing the school-to-prison pipeline,” Anna said. “By imprisoning people of color disproportionately the country is perpetuating systematic racism.”

Most Americans believe that police brutality exists, yet they remain starkly divided on how to solve the issue, according to a study by Pew Research Center conducted following Floyd’s death.

With no agreed-upon solution in regards to holding police accountable, and both the election and chillier winter months closing in on protesters and advocates, it is hard to see any drastic changes in policing in the near future.

“I doubt that significant changes in policing will take place as a result of the protests earlier this year,” said. William A. Sampson, DePaul professor emeritus of public policy “Police departments need huge changes in hiring and screening processes. They must screen out racists and recruit more college-educated, thoughtful new officers. That requires screening that currently does not generally take place, and large increases in pay, so that folks who currently want to be lawyers or computer techs might consider law enforcement.”

There are clear gaps between the widespread activism that occurred after Floyd was killed, and the changes in the law that would need to occur for tangible police reform. In spite of this, it has brought police reform to the forefront of national political conversations.

“The protests led to city lawmakers, at least in Minneapolis, feeling pressured to put police reform on the agenda,” said Christina Rivers, a DePaul associate professor of political science “It also led to a lot more voters on local levels noticing the prominence of police brutality heading into a big election year.”

Rivers highlighted how the sustained activism in Minneapolis that was seen after Floyd’s death was encouraging because of how it brought forth the issue of Black communities disproportionately experiencing police brutality right before voters, both locally and nationally, were thinking of the election.

DePaul political science professor Ben Epstein, who is proudly from Minneapolis, says that the term ‘defunding’ is not going to be an effective messaging model for activists to turn the tide toward widespread police reform.

“Defunding would mean increasing counseling services and other community support, but framing the issue of police defunding is essential to creating change,” he said. “‘Defunding’ is not an effective widespread message. It is misleading because it doesn’t actually represent what defunding would entail for communities. Americans don’t necessarily want police to disappear, they want it to be better. Additionally, Congress is not going to nationally ‘defund’ the police anytime soon, so local governments would have to do that. In that way change will be spotty around the country if it occurs.”

In the wake of George Floyd’s death and on the eve of a momentous election, the four officers involved in the death of Floyd await trial due to the mobilization of local grassroots activism in Minneapolis. The memorial outside of Cup Foods for Floyd expands every day and the Minneapolis City Council plans to rethink policing after the election in November. Meanwhile, most other communities around the country are grappling with how to address the problem, if they believe it to be a problem, of police brutality.

“In all these situations, local communities directly affected by police brutality have been calling out the police for decades but nobody paid any attention to them,” Rivers said. “It takes people who aren’t from that community, and the people who are from different communities that have more power and influence to notice and take action, for the laws to not only be changed but also enforced. One of the things we have to look out for moving forward is, for instance, say, George Floyd’s killing leads to meaningful changes in police practice both in Minneapolis and around the country. Then, you have to think about who is going to keep enforcing those practices.”