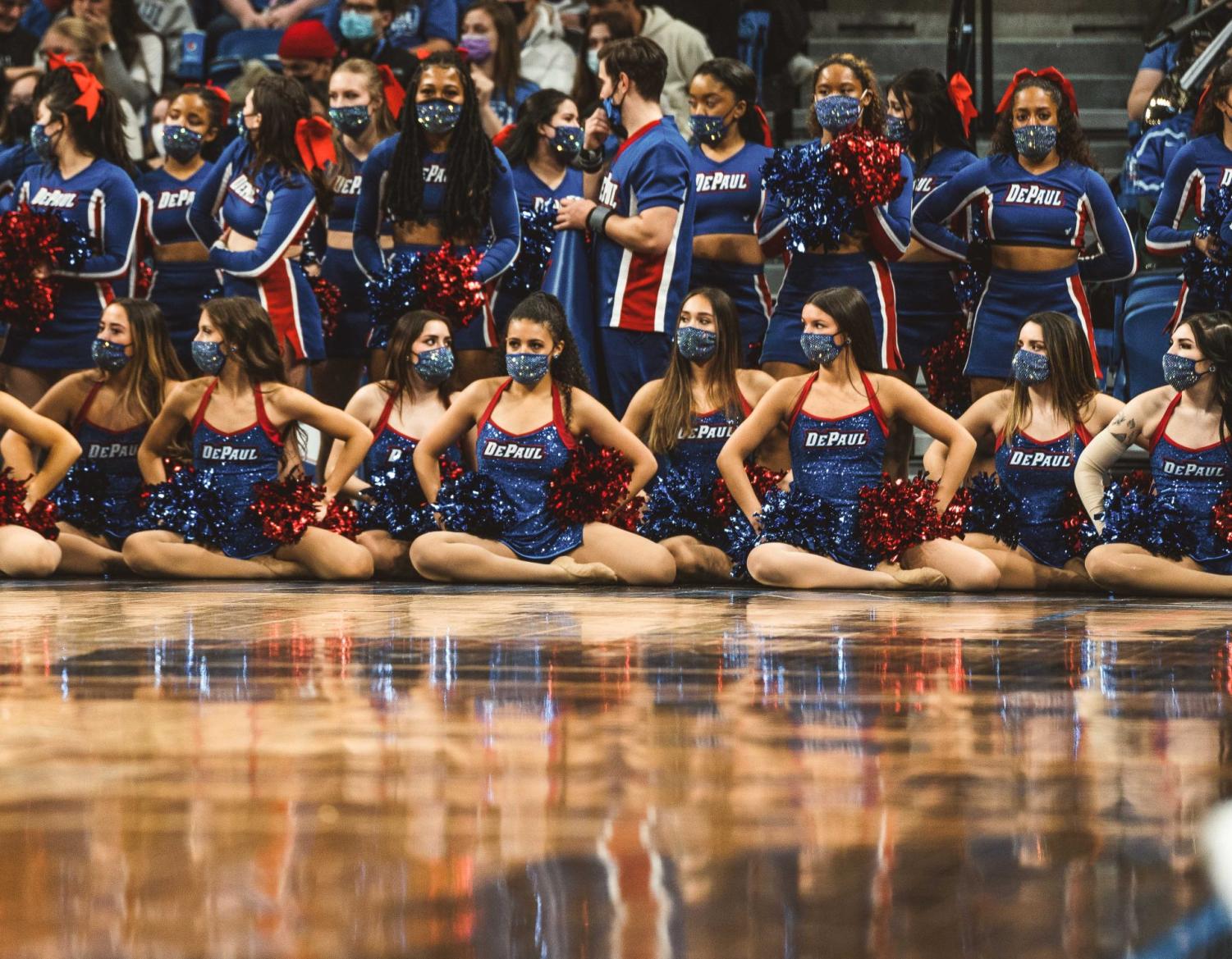 The DePaul Dance and Cheer teams attend every DePaul men’s and women’s basketball games, while also performing in competitions during the season, such as nationals. (Ben Zebrowski)

The DePaul Dance and Cheer teams attend every DePaul men’s and women’s basketball games, while also performing in competitions during the season, such as nationals.

The spotlight grows brighter on the DePaul spirit teams

They are at every game, win or lose. They raise up the team, perform in front of hundreds and dedicate time and effort to lift the spirits of the students and fans at DePaul.

While sometimes lost in the shadows of DePaul’s different athletics teams, the DePaul spirit teams play a crucial role for the athletic department — and the school as a whole. Made up of the dance and cheer teams, every one of their performances shows the passion the team has for the sport and the time they invest in the team to be the best.

Dance and cheer teams may not be considered teams under the qualifications of the NCAA, but the effort that the students put into their teams matches that of the Division I athletes at DePaul. The teams dedicate hours upon hours to practicing, supporting the school at different events and performing at every DePaul basketball game.

Between the dance and cheer teams performing at breaks and throughout the games, the teams have a large impact on the energy at Wintrust Arena. The spirit team members put their all into their sport and their roles as the energy for DePaul Athletics. And their efforts all stem from their love for their sport.

“I’ve been doing cheerleading since the fifth grade,” said junior cheer team member Alysia Haywood. “So, I was doing it in high school as well, and getting the opportunity to do it in college is something that I really wanted to do. And I love it here, it has helped me work out of my shell. I’m a really shy person, so this is something that really helped me.”

The dance and cheer teams, led by head coach Shannon Lersch, spend three to four hours a day practicing for three days a week, along with regular weekly workouts. They are required to attend every basketball home game, as well as support the school and athletic department at events such as Demon Day.

“Growing up, I was always involved in dance,” junior dance team member Nikkia Allen said. “It allowed me to harness my communication skills and time management and things you need in the real world. And dance is something that I’ve always enjoyed.”

Allen carried her love for dancing over into DePaul. She likes how involved the dance team was at home games and the role they have in pumping up the fans.

The dance team works with the cheer team to energize the crowd, while also performing at different breaks during the games, most notably at half-time where they have more time to choreograph routines and dances.

“The whole dance team was kind of in the shadows of all the other athletic teams, and I just feel like we didn’t get enough recognition,” DePaul dance team alumna Madeline Kretschmer said at the men’s basketball Alumni Game on Jan. 29. “I feel like the dance team now, even just being here, really stands out and they’re doing a really good job, and I feel like more people are starting to pay attention to them, which is really cool to see. I wish we all got to experience that.”

Additionally, the dance team recently performed at the Universal Dance Associations College Nationals on Jan. 14-16, where they placed 20th. Last season, the team went to Nationals for the first time in years and finished fifth. However, this year was the first time that the current members of the team participated at the competition while also performing at every DePaul basketball home game.

“Just a step of getting out there and competing on that stage with teams that have done that year after year,” DePaul athletic director DeWayne Peevy said. “You got to do it the first time in a long time once, right, and I think that’ll just propel them to better heights and what they can accomplish, but it was a heck of an achievement, in my opinion.”

The addition of Peevy to the athletic department staff in 2020 has boosted the recognition and involvement of the spirit teams at DePaul. Before coming to DePaul, Peevy was the deputy director of athletics at the University of Kentucky, which is known for its large dance and cheer programs.

When Peevy joined the Blue Demon staff, his goal was to bring over what he saw at Kentucky and apply it to the spirit teams to help raise the teams to the level of recognition that they deserve. And in the year and a half that Peevy has been at DePaul, he has already started to make some changes.

“What we tried to do in my short period of time is, for the first time, integrating the spirit squad coaches into some of our larger all-staff coaches meetings,” Peevy said. “I didn’t know they weren’t a part of them before, so those are things we did.”

Peevy, a cheer and dance dad himself, has been working with Lersch to grow the programs even more and build their presence in athletics and across campus in a way that DePaul hasn’t seen before.

With the initiatives of the athletic department, the spirit teams have moved more into the spotlight and are gaining recognition as a key component of DePaul.

“We’re not just girls in sparkly uniforms, we’re athletes as well,” Allen said. “We put in the same amount of hours as every other athletic team. And just to understand that when we go out there, we’ve been practicing and putting in the work.”