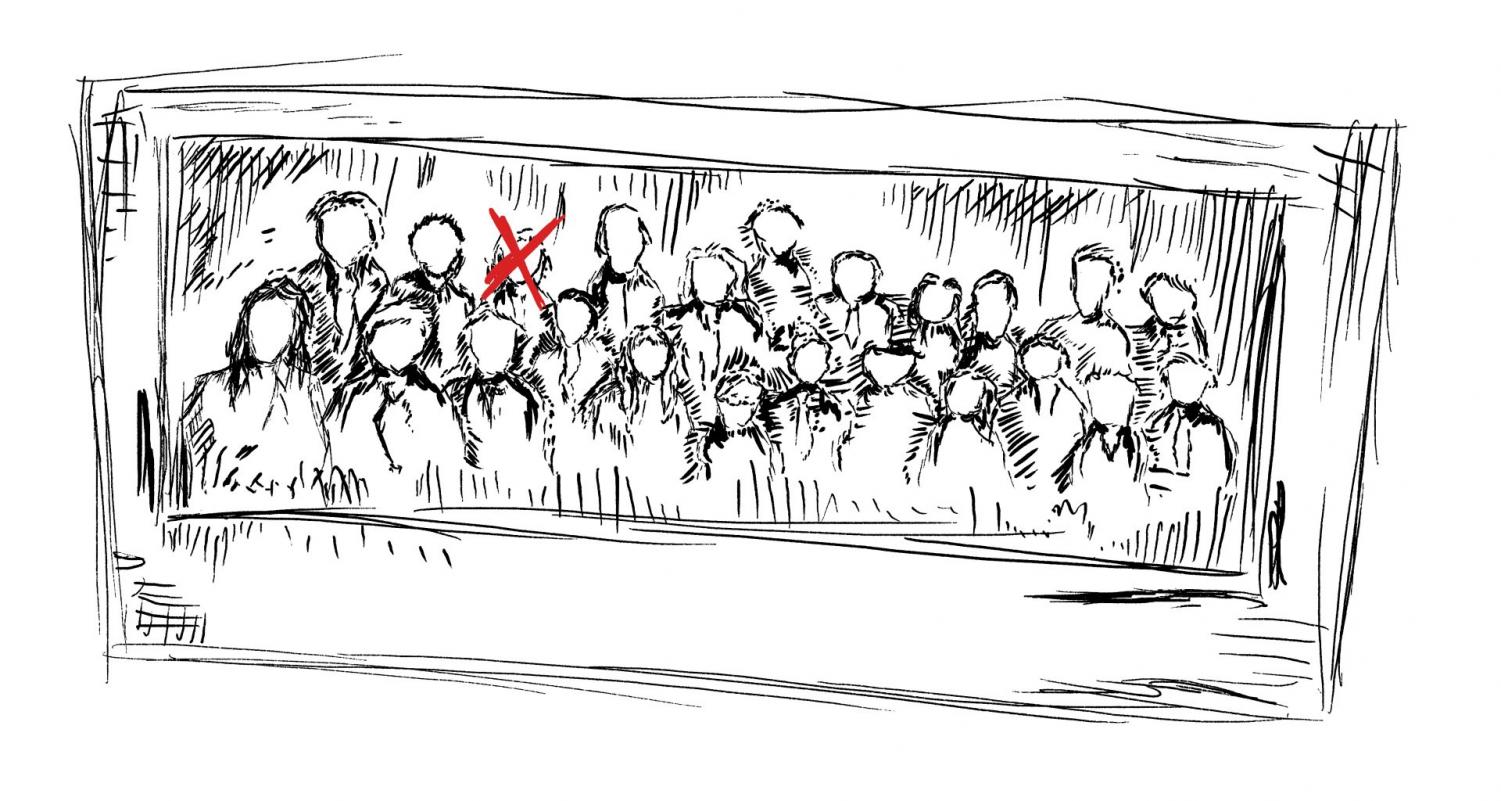 COLUMN: I was an avid member of Greek life—now I want to see it abolished

Growing up, I was vehemently against Greek life. In fact, I ridiculed my peers for joining because I didn’t understand the appeal. I regarded fraternities and sororities as exclusive, cult-like and ultimately a waste of money.

When I came to DePaul, my mind hadn’t changed until a friend I looked up to told me about her professional business fraternity, Alpha Kappa Psi. It was the first I ever heard of a co-ed fraternity and while I was intrigued, my preconceived thoughts about Greek life persisted.

My friend invited me to an info session, and at the time I was an impressionable freshman new to the city – I had nothing better to do.

The session itself was intimidating, riddled with talk about internships and business etiquette. I felt like I didn’t belong, but I made a friend that night and we decided to go through the rush process together.

Before I knew it, I was standing in my dorm room bathroom trying on the only blazer I had. The new terms; rush, bid, pledge, confused me. Before I could rush the frat, I would have to pass an interview to get a bid, which would make me a pledge.

I passed the interview and officially became a pledge rushing AKPsi. But the process had just begun. Now I had to endure a quarter’s worth of pledge class, mandatory events and brotherly bonding.

In addition to rushing, I worked a part-time job and was a member of DePaul’s rowing team, making it one of the busiest periods of my life.

Balancing school, work and a social life was hard. One night in particular I found myself in the backseat of a friend’s car, on the way to a mandatory event while completing an online math quiz. I asked myself, is putting in all this energy into rushing worth it?

I never got the chance to answer that question. My pledge class president and vice president made it clear that they had zero confidence I’d make it through the rush process. They took the photo of our pledge class and drew a large red X over my face, deeming me as stupid, incapable of making it into the exclusive group.

Additionally, other brothers expressed concerns that I wouldn’t be able to handle all of my extracurriculars at once. One suggested that I quit the rowing team so I could put all my energy into rushing.

That quarter was rough, to say the least, but in the end I officially became a member of AKPsi. In fact, the president and vice president who bullied me and others were denied initiation. Finally, I thought I had made it.

Being an official brother had its perks. I made some of my best friends and even gained internship experience. Everything was going well, or so I thought.

Now that I was an official brother, I was ready to get involved in AKPsi. I wanted to give back partially out of obligation – even though I was already initiated, I felt the need to show my loyalty.

As a non-business major in a business frat, I felt like the only way to prove my worth to this organization was through my devotion. Subsequently, I was elected to the E-Board. I thoroughly enjoyed being involved and felt like my voice was valued.

When DePaul moved classes online and prohibited in-person involvement on campus due to the Coronavirus, I put in even more work than before to ensure we operated as smoothly as possible online.

When the Black Lives Matter movement gained traction in the media following George Floyd’s murder, I was proud to draft a solidarity statement for AKPsi. Additionally, I helped coordinate a fundraiser for BLM organizations in Chicago. It felt like I was using my fraternity as a platform in a positive way.

Initially, I was happy to put in all this time and effort, often spending entire days writing and revising statements and action plans. I thought that as a person of color, it was my duty to ensure this organization was the best it could be.

As time passed, I was one of the few E-Board members consistently putting in the work to help reform the frat to be more inclusive, and one of the few BIPOC.

When I saw a DePaul student calling out DePaul’s Phi Mu chapter for their racist microaggressions and lack of response to the BLM movement, I was appalled. In fact, I felt fortunate to be a part of a “good” fraternity who was actively outspoken in regards to the current political climate.

The DePaul student who quit her sorority was followed by another sister out of solidarity, being the only two Black members. Their powerful statement prompted me to reflect on my experience with Greek life on campus.

I rushed AKPsi for many reasons, and primarily I wanted the experiences and advantages I perceived weren’t meant for me. I wanted to join to excel in my professional career and make social connections, something I deemed was only reserved for the elite college students.

One of AKPsi’s main selling points was the fact their dues were lower than traditional sororities and fraternities; however, I often struggled to come up with the money. The economic burden extended beyond recurring chapter dues, and informal costs such as socials and apparel added up quickly.

Additionally, when I became a pledge I felt like no one believed in me, that I was stupid and inexperienced in comparison to my peers because I never had an internship before. I never considered the connections and privilege my brothers held that most likely contributed to their impressive job experience.

I first rushed AKPsi because I thought it was more inclusive and welcoming than other Greek organizations. However, once I was initiated I realized it was incredibly exclusionary and cliquey, reinforcing to me that Greek life was created to exclude.

For instance, I initially felt uncomfortable critiquing the current pledges during our weekly meetings, but I thought I had the right to criticize people I don’t know because it was my duty –I was helping shape the future of the frat.

I realized I was being exclusionary myself. I wasn’t any better than the brothers that doubted me and my ability to successfully rush. I also couldn’t help but think – what did my fellow brothers say about me when I was a pledge?

A few Google searches reinforced what I was coming to terms with: Greek life is inherently racist. According to Lawrence Ross, author of “Blackballed: the Black and White Politics of Race on America’s Campus,” “Greek organizations resisted class and race diversity. Frats were a way for white upper-class men to separate themselves from an increasingly diverse student population.”

Furthermore, at their core, fraternities and sororities also excluded people who were not straight, cisgender and wealthy. I used to think that Greek life had come such a long way since its founding, and that there was no way it was still racist. Instead, I am reminded how Greek life wasn’t intended for someone like me – a queer, non-binary person of color.

But I had believed this misconception because it eased the guilt I felt from participating in such a harmful system. Segregation in Greek life persisted until recently. Most surprisingly, one sorority at the University of Alabama didn’t desegregate until 2013.

The cycle of selective membership continuously benefits predominantly white and affluent groups, and keeps them that way. According to Cornell University, “two percent of the U.S. population are in fraternities; yet Greek alumni constitute 80 percent of Fortune 500 executives, 76 percent of senators and congressmen and 85 percent of Supreme Court justices.”

Financial barriers, among other exclusionary tactics, reveal how Greek organizations were created to uphold classism and racism, among other problematic themes. I’ve concluded that Greek life is not a broken system, and it does not need my help to reform it. Instead, it is working exactly how its founders intended it to function – for the benefit of the white upper class.

While it is true that America’s current power structure forces individuals to participate in numerous oppressive systems, participating in some oppressive systems such as Greek life is optional. I believe that remaining in Greek life perpetuates harm in college communities, and I will no longer remain complicit.

Historically white fraternities and sororities are ingrained with white supremacy, patriarchy, classism, ableism, homophobia, transphobia and sexual violence. It is important to specifically recognize the history of oppression that BIPOC students have experienced at the hands of Panhellenic and IFC Greek life since its founding.

It is time to listen, learn and interact with other parts of campus to let other organizations lead because Greek voices have been dominant for too long. I believe that funds allocated to Greek life should be reinvested in organizations for multiculturalism, community development and mentorship, to name a few.

Ultimately, abolishing an antiquated system founded on exclusion is a crucial first step in taking accountability and dismantling outdated and oppressive organizations. I will be taking advantage of the COVID-19 interruption by getting involved with non-Greek campus organizations in order to expand my own circles and make meaningful connections.